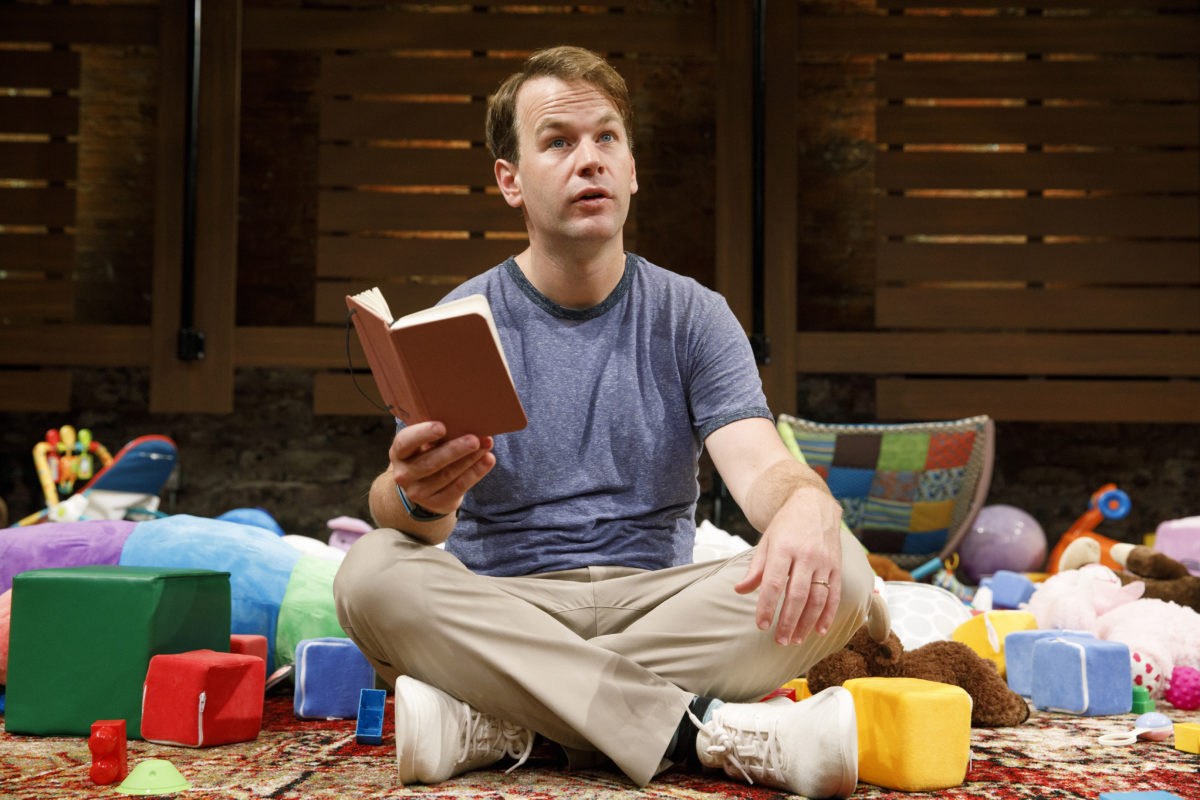 A friendly, boyish dude on the cusp of early middle age, Birbiglia embodies the everyman personality of so many standup comics, reminding you of some talkative guy you know and enjoy hanging out with because he’s so funny. He tells honest-seeming, if slightly exaggerated, stories about his own life, larded with humor that’s often sexual or scatological; rarity of rarities, however, he keeps the profanity to a minimum so it makes more of an impact when he needs to use it. His current show, with which he’s been touring the country, runs an hour and a half, very little of it not filled with laughter from the Cherry Lane audience.

It’s hard to call Mike Birbiglia: The New One (whose subtitle has more than one meaning) a play; although carefully scripted (by Birbiglia and his wife, Jennifer Hope Stein), with a distinct, if pleasantly meandering, beginning, middle, and end, it’s more like an extended standup routine. Even Beowulf Borrit’s simple set of wooden planking (lit by Aaron Copp) placed against the stage’s clearly visible brick walls suggests a comedy club environment. Birbiglia, casually dressed, puts on a body mic as we watch, and, as directed by Seth Barrish, walks freely about on an Oriental carpet, his sole piece of furniture a wooden stool, the classic standup prop. His manner is open and engaging, and, while he doesn’t actually laugh at his wisecracks, he follows most with a smile. Generally upbeat, he’ll now and then morph into a more serious mode, a device that you soon realize is a stealthy setup for a zinger.

His biggest drawback is a habit of slipping from a clearly articulated conversational tone into mumbling and whispers, the latter often delivered with exaggerated lip movements as if we’re lip readers with whom he’s sharing something on the QT. Regardless of their amplification, words that snap, crackle, and pop for the hearing-healthy sound like oatmeal for others. One even suspects that this nonmusical actor is wearing a mic in such an intimate venue because he’s well aware of this problem. Birbiglia begins by talking about another piece of furniture, his couch, which leads to a series of couch jokes. These segue into life after his downscale marriage to Jen (whom he sometimes calls “Clo”), followed by his description of a visit to his brother’s family. This allows him to express his defiantly negative feelings about having kids (for which he soon offers seven hilarious rationales). Jen, however, despite initial reservations, now has other ideas about the matter, which lead to this big-laugh exchange:

“If you don’t want to have a baby maybe I’ll have one on my own and we can stay married.”

And I said, “That’ll be a good look, just you, and me, and this kid that’s a cross between you and some grad student jacking his way through SUNY Purchase.” Among Birbiglia’s reasons for not wanting a kid is his medical history, which, for all its dire aspects, is mined for comic gold. He gets mileage from his sleepwalking problems (so scary he made a film about them), a cancerous bladder issue (and the need for annual cystoscopies), and other conditions equally serious but nonetheless funniness fodder. But even after he agrees to be a dad, which means abandoning a condom for the first time (wait for the analogy he makes for what that feels like), problems arise with his sperm. Fortunately, Birbiglia has the talent to transform this familiar subject (and even the urological procedure it requires for correction) into nonstop amusement.

Of course, we now get a slew of pregnancy jokes (including the weird cravings), the birthing classes, and the frustrations of parenting an infant (especially a sleepless one) while also accommodating a pet cat and dealing with the resulting marital pressures. None of this is very new but Birbiglia makes it all fresh. Which isn’t to deny that this new father’s self-centeredness can be irritating.

As I often do when preparing to see a show, I decided to read the press script beforehand. Half-way through, though, I stopped because I realized that if I was laughing now I’d laugh even harder when I heard Birbiglia’s jokes in person. It was a wise decision, wiser than not peeing before I left the Cherry Lane.