The announcement was  by Charles Wright, Drama Desk President
and Gretchen Shugart, CEO of TheaterMania.com and Managing Executive
Producer of the Drama Desk Awards.  TheaterMania will present
the awards ceremony for the sixth consecutive year. 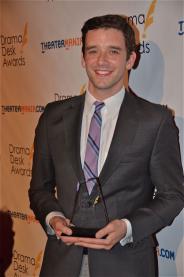 The Drama Desk Awards are the only major New York City theater honors for
which productions on Broadway, Off-Broadway and Off-Off Broadway compete
against each other in the same categories.

The Drama Desk Awards nominations announcement will take place on Thursday,
April 27th at Feinstein’s/54 Below at 10:00 a.m. and will be streamed live on www.TheaterMania.com.

“The Drama Desk is privileged to collaborate again with TheaterMania and the superb
production team assembled by Gretchen Shugart and Joey Parnes – and to welcome
back, as our host, the charming Michael Urie,” said Charles Wright.
“The Drama Desk team is committed to celebrating not just the Awards
nominees and winners but everything that’s outstanding in the New York theater
community.”

“TheaterMania is honored to present the prestigious Drama Desk Awards for our sixth
consecutive year,” Shugart said. “Celebrating New York City
theater gives us a chance to showcase the creativity, diversity and excitement
that is on and off Broadway with people around the globe. And with the amazing
Michael Urie again leading the show, we know it will be a great night.”

Joey Parnes Productions will produce and manage the show. The
Awards show will be written by Bill Rosenfield and directed by
Mark Waldrop (Not That Jewish, Howard Crabtree’s When Pigs Fly,
Bea Arthur on Broadway: Just Between Friends).

The Drama Desk Awards, which are presented annually, honor outstanding
achievement by professional theater artists on Broadway, Off-Broadway and
Off-Off Broadway. What sets Drama Desk Awards apart is that they are voted on
and bestowed by theater critics, journalists, editors and publishers covering
theater, without any vested interest in the results. For this reason, Drama
Desk Awards reflect both enthusiasm for all aspects of New York’s professional
theater.

In addition to TheaterMania and Ms. Shugart, Robert R. Blume and David
S. Stone are Executive Producers of the Drama Desk Awards.