December 16, 2022: Are you ready for a bloody good time? It’s 1606 and an egomaniacal Shakespeare is plagued with writer’s block. London’s theatres are closed and the plague, the Black one, has the Bard in quarantine with his sly apprentice, Francis. However, he’s not as sly as the cunning woman known as Jane Anger, who climbs in through a window. 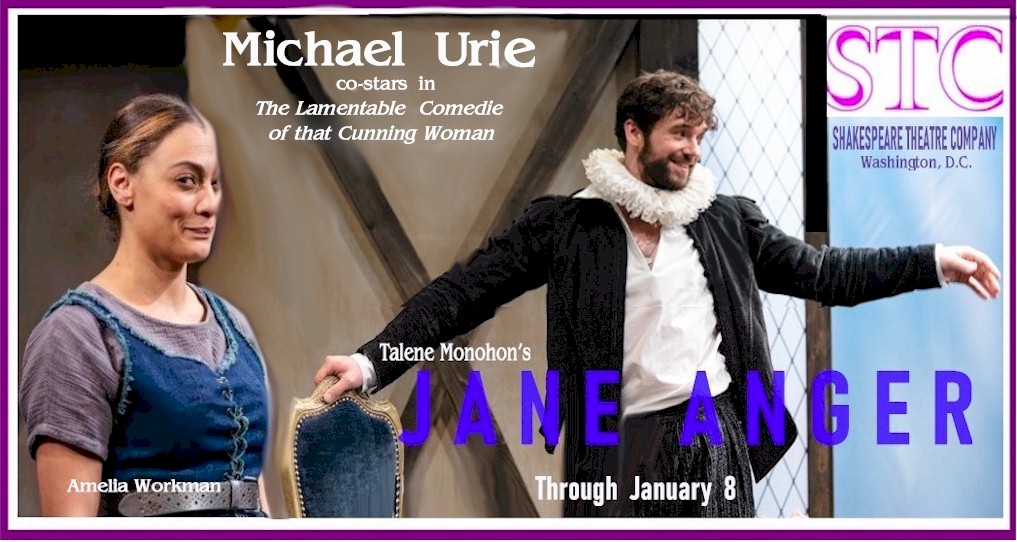 December 16, 2022: Are you ready for a bloody good time? It’s 1606 and an egomaniacal Shakespeare is plagued with writer’s block. London’s theatres are closed and the plague, the Black one, has the Bard in quarantine with his sly apprentice, Francis. However, he’s not as sly as the cunning woman known as Jane Anger, who climbs in through a window.

A writer of some note, she has a diabolical plan to change history as the Bard is attempting to write King Lear. However, the other cunning woman, Anne Hathaway of Stratford-on-Avon takes matters into own more than capable hands no matter the cost.

STC’s revival of Talene Monahon’s hit Jacobean feminist revenge farce The Lamentable Comedie of JANE ANGER, that Cunning Woman and also of Willy Shakespeare and His Peasant Companion, Francis, Yes and also of Anne Hathaway (also a Woman) is being presented in association with Jennifer Campos Productions.

Monahon is a Brooklyn-based actress/writer. Monahon and her plays have been featured at numerous Off Broadway and regional theatres. As an actress, among theatres where she’s appeared is the famed La Jolla Playhouse, Cape Cod Theater, and and Northern Stage. She was awarded first prize by the English Speaking Union in their National Shakespeare Competition.

The New York Times praised Monahon as “a gifted comedy writer. The exceptional cast delivers her mile-a-minute gags with zest.”

In its premiere engagement in February at New York’s New Ohio Theatre, Jane Anger was nominated for a 2022 Off-Broadway Alliance Best New Play. It
co-starred the playwright as Jane Anger, Michael Urie as the bard, Amelia Workman as Anne Hathaway, and Ryan Sphan as Francis. The quartet is returning for STC’s revival, as is director Jess Chayes.

Chayes is the the recipient of the League of Professional Theater Women’s Lucille Lortel Award and the Collaboration Award from the Women in the Arts & Media Coalition. She states that Shakespeare wrote King Lear during a plague, and it’s such a coincidence that she wrote Jane Anger throughout 2020 while sheltering in place as the U.S. raged with the Covid epidemic.

Urie counts D.C. among his favorite cities. “I’ve been fortunate to play Hamlet
and Ben Jonson at STC, and I’m incredibly excited to perform William the
Bard again here at his theatre’s namesake. Talene’s play is such a perfect
work to share with D.C.and the Beltway audiences. You’ll see why.
Audiences are going to love it! ”

A native of Houston, Urie states he did a lot of Shakespeare in high school but only became a staunch acolyte while at New York’s Julliard when he saw Lincoln Center Theatre’s 1998 production of Twelfth Night, directed by three-time Tony winner Nicholas Hytner and which starred, among other notables Helen Hunt, Paul Rudd, Kyra Sedgwich, Philip Bosco, and Bryan Murray. The stunning design was by seven-time Tony winner Bob Crowley. “That production had me in awe of Shakespeare!”

Urie has gone on to play quite a roster of Shakespeare roles: Hamlet, Mercutio (D.C. Folger), Roderigo, Saturninus, Flute, Boyette, Horatio (South Coast Repertory), Hastings, Benvolio, Demetrius, Chiron, and now the Bard himself.  “I’m fond of those roles, but especially appreciative of the Hamlet I did right here at STC in 2018.”

“Michael Urie is, as always, a triumph,” raved Vulture. “His Shakespeare consists of a deliberately limited set of ingredients — peevishness, sudden freak-outs, equally sudden flops into boneless ennui—which Urie assembles and reassembles into a banquet.”

Urie gained instant recognition and critical acclaim via his 2000 New York debut in The Temperamentals, the Jon Marans play that chronicled the founding of the Mattachine Society, the country’s first LGBT rights organization. His other big moment was his hilarious portrayal of Marc St. James on the ABC series Ugly Betty, opposite his beloved friend Vanessa Williams, who was so impressed with him and his comic timing in the series pilot that she campaigned to bring him on as a regular.

His Off Broadway highlights include the long-running one-man play Buyer & Cellar, Chicken & Biscuits,The Government Inspector, Torch Song (also on Broadway), and Angels in America. On Broadway: The Tony-nominated Grand Horizons and, among others, How to Succeed in Business…He is co-starring on Apple TV+ with Harrison Ford and Jason Segel in Shrinking.

“With its gleefully anachronistic tone, nod-and-wink meta-humor and raunchy antics, Jane Anger makes for brazen counterprogramming,” states Chayes, “especially as it comes between two incredibly detailed, amazing Shakespeare interpretations, Much Ado About Nothing, and precedes a production of King Lear (February). To have sandwiched between those a play where we can gleefully skewer Shakespeare is incredible.

“Jane Anger’s portrayal of Shakespeare stricken with writer’s block and a severe case of narcissism plays as particularly irreverent at a company adorned with his name. Jane’s a revolutionary feminist long before there was such a thing, bold and unafraid to speak truth to power. Her collision with Shakespeare himself brings comic pyrotechnics and incisive questions.”

“If you’re looking for something gloriously silly and gleefully entertaining to break the monotony of holiday shopping, this is it,” points out STC artistic director Simon Godwin.

Jane Anger … plays through January 8, 2023, at STC’s Klein Theatre, 450 7th Street NW, Washington. Tickets are $35 – $125. For more information and/or to purchase tickets, contact the box office (202-547-1122) or visit Shakespearetheatre.org/tickets-and-events/special-offers. Discounts are available for seniors, students, military, and patrons 35 and under – though this is definitely adult entertainment.