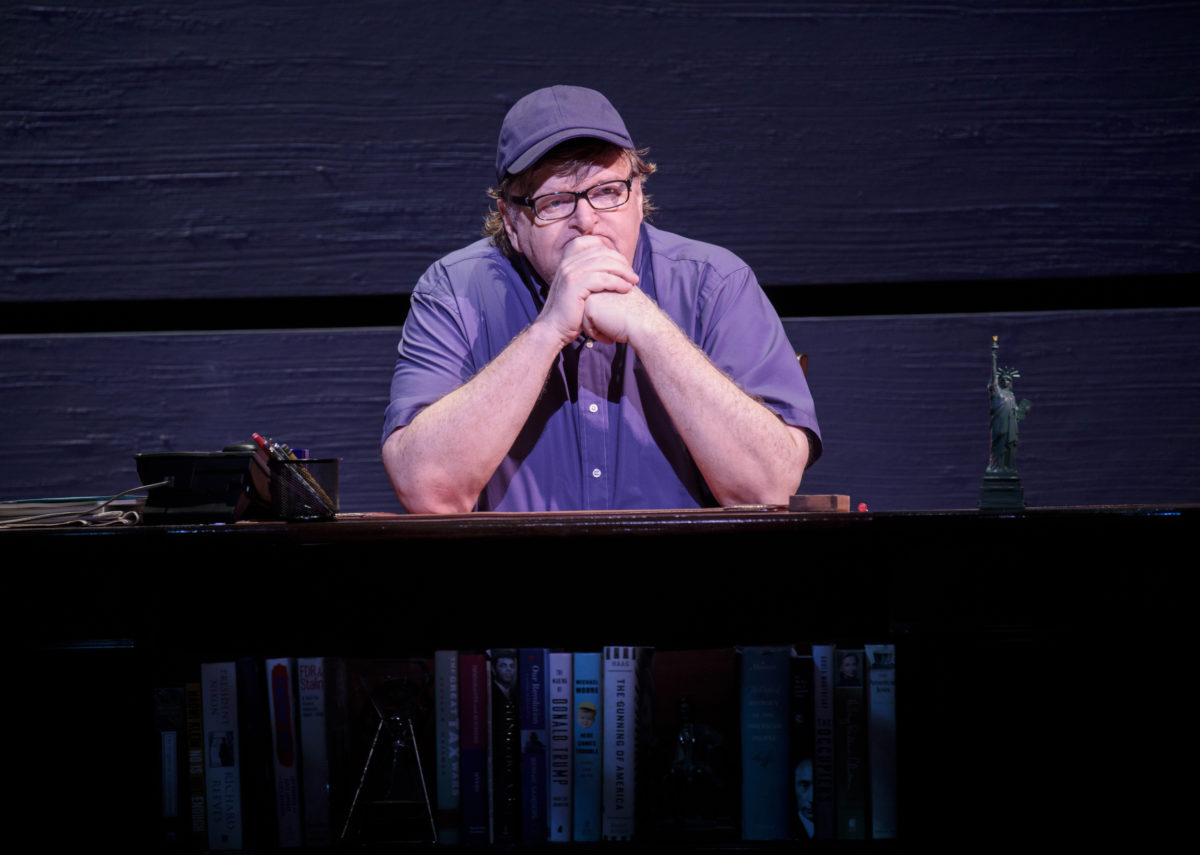 Presenting his platform for his 2020 Presidential run, Moore promises free HBO for all Americans, a ban on low flow showerheads, and two free joints, delivered weekly by the US postal service. Isn’t that something every American can understand just as easily as “You’re fired!”? Stirring things up for a change, Moore is not about to surrender; he will bring Donald Trump down.

That is why he has called us all here, to the Belasco Theatre, for a 12-step meeting. His higher power is Ruth Bader Ginsburg. And the addiction he’s working on is the drunken notion that Trump will be stopped without our having to do anything. While compassionate, his target is our fear of our taking active measures to defeat the 45th President — the apathy, lethargy, and spinelessness of liberal Americans, who allowed “this” to happen. His admonition, “Sober the (expletive) up!”

Describing our pathos, using his knowledge of the political scene, Moore presents a database of factoids about how the democrats lost the 2016 Presidential election. One glaring statistic, that Clinton lost the state of Michigan by just 2 votes per precinct, drives the point. Activism starts small, but it starts with US.

More importantly, he is probing, and down to earth in analyzing the issues facing our country. His genius comes out in the way he follows a thread of information as it connects with another, and attaches itself to the bigger picture. Working his way from the biopsy to the disease, his ability to conceptualize, and communicate in simple English, is inspiring to witness. And if it propels us to action, as the Q& A afterwards indicated, his show would have been civically worthwhile, too!

Of course, Moore is here to stir us up, to empower us, and to free us to all to play a role in changing the direction our country is taking.  His premise, that everyone should run for office is one he shores up with his own experiences, like getting his friends to vote him onto the Board of Education when he was in high school, so he could get their principal fired. What 18-year-old voter, wouldn’t go along with that? It’s easy.

Still, facing one’s fears is never easy. In the end, he faces his own – dancing. Like the buffed cops who step into their roles on the kick line, Michael Moore sends us into the night, inspired to stand up with courage.