January 1, 2023: No song has ever captured the feeling of sheer, outrageous, ebullient joy at having created a successful Broadway show as vividly as the late Stephen Sondheim’s “It’s a Hit!,” from Merrily We Roll Along, his 1981 musical, which, for years, was itself anything but. With a book based by George Furth on a 1934 play by George S. Kaufman and Moss Hart, which garnered only a modest 155 performances, the musical has long been a cult favorite of Sondheimaniacs. 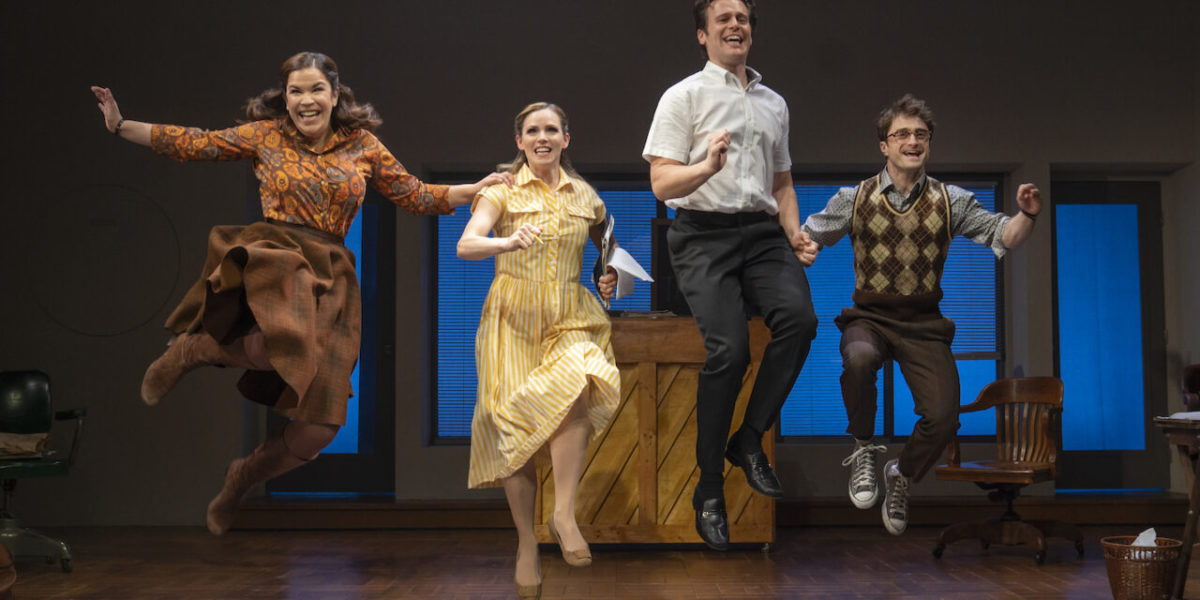 January 1, 2023: No song has ever captured the feeling of sheer, outrageous, ebullient joy at having created a successful Broadway show as vividly as the late Stephen Sondheim’s “It’s a Hit!,” from Merrily We Roll Along, his 1981 musical, which, for years, was itself anything but. With a book based by George Furth on a 1934 play by George S. Kaufman and Moss Hart, which garnered only a modest 155 performances, the musical has long been a cult favorite of Sondheimaniacs.

Despite the 16-performance failure of its original Broadway version (directed by Hal Prince), theatre makers have been searching for a key to make it a commercial success ever since. That includes two Off-Broadway revivals in 1994 and 2019, an Encores production in 2012, and multiple versions elsewhere, during which the show underwent considerable revisions in search of an El Dorado of popular appeal. The answer seems to have been found in London in 2012, when Merrily We Roll Along finally justified that optimistic song title and everything was thought to have merrily rolled into place.

That hit production, directed by Maria Friedman at the Menier Chocolate Factory, is the source of the current staging at Off Broadway’s New York Theatre Workshop, an instant sellout generating nearly universal raves and so much theatregoing excitement that it was rapidly decided to move it to Broadway with the leading players intact. That formidable group includes audience magnets Jonathan Groff, Lindsay Mendez, and Daniel Radcliffe at the top, with Krystal Joy Brown, Reg Rogers, and Katie Rose Clarke in support. It was raining lightly when I attended the matinee on the last day of 2022, but the line waiting in the drizzle for cancellations was the longest I’d seen for an Off-Broadway show in quite a while.

For all that, and I know I’m going to get whacked for this, I never found myself swept up in the euphoria one typically feels when in the presence of a genuine smash. There’s no doubt that Ms. Friedman’s staging is exuberantly dynamic, that the roles are notably well cast, that the ensemble is gifted, and that Sondheim’s songs display his typical genius for kaleidoscopic word play, complex choral effects, and novel melodic qualities. Yet, given our long familiarity with the Sondheim playlist, even if (like me) you recognize only a small number in this particular score, there are few musical surprises. In other words, you need to hear only one or two songs to know immediately who wrote them. Which is not to diminish the thoughtful power of first-rate numbers like “Old Friends,” or several others, “Not a Day Goes By” perhaps being the most familiar; it just seems, especially after the recent revival of Company—to which it bears distinct resemblances—to have a bit too much of a been there, done that vibe.

When the original play was produced, its use of reverse chronology to tell the story of how its playwright hero’s youthful idealism becomes tarnished—as his work becomes increasingly meretricious and his goals more materialistic—was considered revolutionary. This technique, now probably best known from Harold Pinter’s Betrayal, certainly helps to make its point by moving backward in time to illuminate the characters’ present day dilemmas. However, it takes two and a half hours to do so, gradually losing its punch the closer we get to the end (or the beginning). Because of the premise, covering 20 years (backwards from 1976 to 1957), there’s also too much dialogue and incident, the characters tend toward superficiality, the devices can border on cliché (those TV journalists!), and the acting frequently favors obviousness over subtlety. Much as Merrily We Roll Along is packed with highlight moments of staging, singing, and reflection, it occasionally drags. Given the current difficulties of drawing and maintaining an audience on Broadway, I can’t help but have doubts about this show’s viability there.

The plot, for which Kaufman and Hart’s character names have been changed, follows the reverse career trajectory of Hollywood film producer Franklin Shepard (Mr. Groff), originally a songwriter, by first showing him in 1976, celebrating his 40th birthday amid his fancy Hollywood friends and coworkers at his upscale LA home. We meet his old friend, Mary Flynn (Ms. Mendez), an acerbic, alcoholic theatre critic—Kaufman and Hart’s original, Julia Glenn, was thought to have been inspired by Dorothy Parker—distraught that Frank has shifted his priorities from music to making commercial movies. Horrors! On the other hand, Frank’s one-time lyricist, Charles Kringas (Mr. Radcliffe), has maintained his artistic integrity and become a Pulitzer-winning dramatist. Noble!

We also meet Frank’s ultra-glamorous wife, Gussie Carnegie (Ms. Brown), once a Broadway star and now a movie actress, angry at losing a part in Frank’s latest picture to a younger actress with whom Frank is carrying on. Before the party ends in an act of jealous violence, Frank has begun to acknowledge the loss of his youthful idealism, a process on which the show now focuses, bit by bit, going back in time.

Subsequent scenes move back to 1973, 1968, 1966, 1964, 1962, 1960, 1959, and 1957. We watch the friendship of Mary, Frank, and Charlie begin, grow, crack, and dissolve, along with professional, artistic, sexual, romantic, and marital developments, as their careers and relationships evolve following success writing hit Broadway musicals. In the final scene, we share the warm optimism of the young characters as they watch for Sputnik in the sky, their hopeful attitude toward the world before them, in which anything is possible, tainted by our bittersweet foreknowledge of what the future actually holds in store.

Soutra Gilmour’s set of a swanky home, expertly lit by Amith Chandrashaker, serves nicely, with minor alterations, for multiple other locales. I suspect it will become more elaborate on Broadway. Her costumes satisfactorily capture the changing years, with a few standouts, like those that help make the already gorgeous Ms. Brown even more so. She chooses to keep Mr. Groff in black slacks and white shirt throughout, while Mr. Radcliffe, looking decidedly seedy, has to wear spectacles, an unattractive, V-necked sweater, and shabby old sneakers that make him look like a 1930s newsie. Cookie Jordan’s wig designs are also very helpful, and Tim Jackson’s choreography—more musical movement than dance—adds just the right kick.

Messrs. Groff (Little Shop of Horrors) and Radcliffe (The Cripple of Inishmaan)once again demonstrate why they are among the most admired and versatile young actors in New York, each of them meeting their dramatic and musical responsibilities with technical and emotional panache. Radcliffe, by the way, stops the show with his rendition of the technically challenging “Franklin Shepard, Inc.” Ms. Mendez (Carousel) delivers another magnificent display of her vocal and histrionic gifts. Ms. Brown (Hamilton) is not only stunning, she can belt with the best of them, as in “Act Two Opening,” while Mr. Rogers does well as Broadway producer Joe Josephson. Finally Ms. Clarke is refreshingly good as Franklin’s faithful first wife, Beth, rendering the classic “Not a Day Goes By” with all the feeling it requires.

Book writer George Furth made many changes when adapting Kaufman and Hart’s original, among them turning the Franklin Shepard role, a playwright originally called Richard Niles, into a composer. With that in mind, I can’t resist closing with this comment by Herman Mankiewicz, on why some had trouble with the play: “Here’s this playwright who writes a play and it’s a big success. Then he writes another play and it’s a big hit, too. All his plays are big successes. All the actresses in them are in love with him, and he has a yacht and beautiful home in the country. He has a beautiful wife and two beautiful children, and he makes a million dollars. Now the problem the play propounds is this: How did the poor son of a bitch get in this jam?”