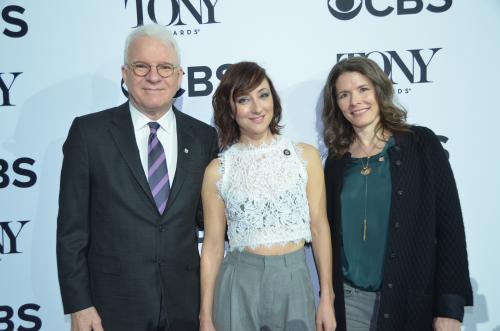 When the nominations were announced the day before, the sold out hit musical Hamilton, Lin-Manuel Miranda’s pop-culture phenomenon, dominated with a record breaking 16 nominations followed by Shuffle Along with 10 nominations and She Loves Me with 8. The revival of Eugene O’Neil’s Long Day’s Journey into Night was next with 7 nominations including Best Revival of a Play and a nod to Jessica Lange for Best Actress in a Play, as well as her co-stars Gabriel Byrne and Michael Shannon along with their director Jonathan Kent.

Hamilton will be an overwhelming favorite to snag the coveted Tony Award for Best Musical, however four other nominated musicals should benefit from being in the same category. They are Steve Martin and Edie Brickell’s Bright Star, Waitress with nominated music and lyrics by Sara Bareilles, Andrew Lloyd Webber’s School of Rock, which is an adaptation of the Jack Black film about a failed musician with nominated music by Webber and lyrics by Glenn Slater, and Shuffle Along, Or the Making of the Musical Sensation of 1921 and All That Followed with a nominated book and choreography by George C. Wolfe and Savion Glover respectively amongst its 10 nominations.

I had a brief and pleasant encounter with the charming Jessie Mueller, nominated for Best Performance by an Actress in a Leading Role in a Musical, who said “This is like the cherry on the cake. I hate to use a hokey metaphor, but this means a lot.”

After being introduced to Lin-Manuel Miranda by producer Roy Furman, I asked Mr. Miranda what all the nominations mean to him. He commented “I am grateful and happy for the recognition.” 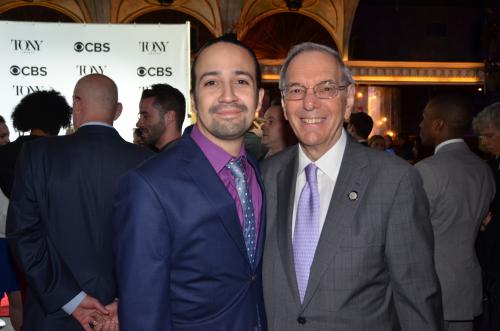 David Rockwell, the nominated Scenic Designer of a Musical for She Loves Me, said “This is like a dream come true. I have wanted to do this show for a long time, so this makes it six times more personal. “ 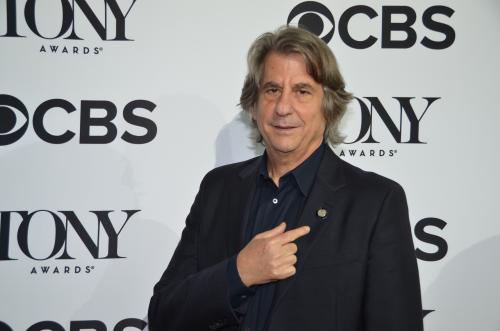 Brandon Victor Dixon, last nominated for a Tony in 2006 for creating the role of Harpo in The Color Purple, is the only nominated performer from Shuffle Along for Featured Role in a Musical as Eubie Blake said, “This is an inspiration, and I am grateful for this and the opportunity to work with inspirational and creative talents like George C. Wolfe and Savion Glover.”

Asked the same question Steve Martin said “This means the world.” And Carmen Cusack nominated for Best Performance by an Actress in a Leading Role in a Musical for Bright Star said “I’m still struggling to find words. The entire experience is overwhelming.”

Liesl Tommy nominated for Best Direction of a Play for Eclipsed, which is also nominated for best Play, shared some of her thoughts on bringing Danai Gurira’s drama about a group of Liberian women held captive by a warlord to life said “I knew the only way this would work was if the actresses worked together as an ensemble” To that end she had a sit down with the Oscar winning film star Lupita Nyong’o, who is nominated for Best Performance by an Actress in a Leading Role in a Play, and communicated her feelings. She said “Lupita is a smart women and the actresses succeeded in forming a tight bond. I am happy and grateful with my heart and soul.” 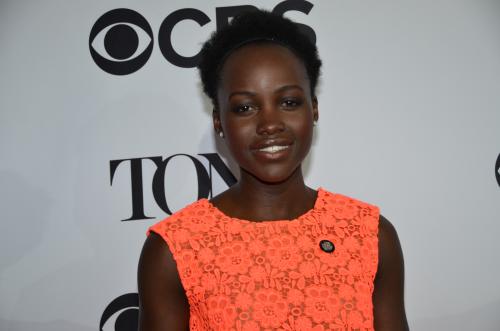 The Father by French playwright Florian Zeller, about a man struggling with dementia, and nominated for Best Play was produced by the Manhattan Theatre Club. Lynne Meadow and Barry Grove expressed their joy at the nomination for the play and Frank Langella’s nomination for Best Performance by an Actor in a Leading Role. Lynne Meadow said “This is gratifying to bring a new voice to American audiences. The play shows the point of view of the patient and his daughter.” She said “Frank Langella was my first choice for the role.” 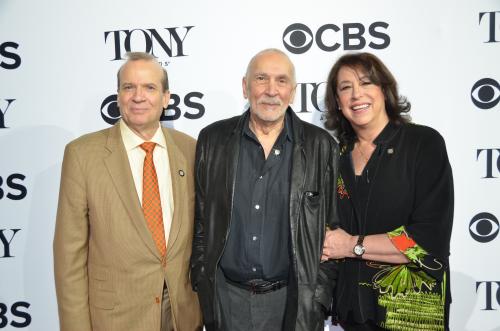 The Tony Awards will be broadcast live from the Beacon Theatre on CBS Sunday June 12 at 8pm in three hour telecast marking 70 years of Broadway excellence hosted by James Corden, the multi-talented English actor/comedian/producer/ writer/singer and talk show host. The show will feature live performances from several of the nominated musicals.