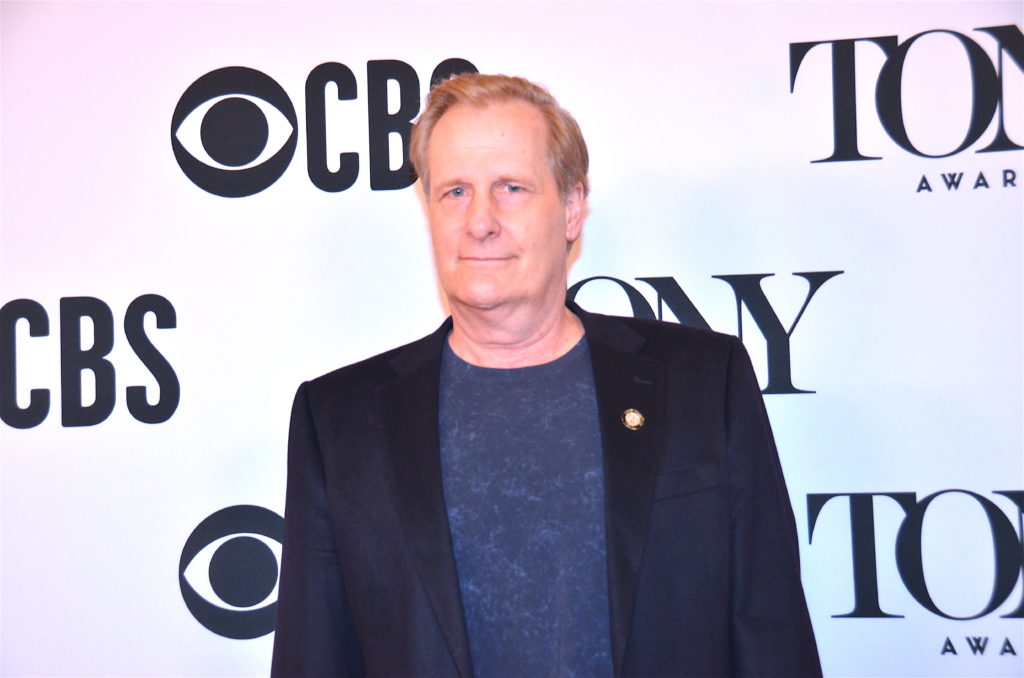 Here is what some of the them had to say about the honor, what inspires them, and where they were when they learned the news:

Jeff Daniels, nominated for best performance by an actor in a play for To Kill A Mockingbird, surprisingly said, “I wasn’t familiar with the story until about two and a half years ago when I got the part and become involved in the project. I play Atticus Finch, an attorney in Alabama, who defends a black man accused of rape. In the play he gets pulled into defending the man, which is different than the book and movie. As divided as our country is about race, Harper Lee’s story is perfect for now.”

Laurie Metcalf, nominated for best performance by an actress in a leading role in a play for Hillary and Clinton, said, “They didn’t want us to be an impression of Bill and Hilary, so that was freeing. The play is set during the 2008 campaign for the Democratic nomination for President at a moment when Hilary is torn between her husband and her campaign manager, when they are suggesting differing strategies to deal with the surging Barack Obama. The play puts this moment in time under a microscope, which would be my idea of Hell. I built the character from the script, which is about a couple being intimate, warts and all, a slice of them done with respect and admiration. I find the end very touching.”

Bob Martin, nominated for best book of a musical for The Prom and Brooks Ashmanskas, nominated for best actor in a musical The Prom. The two men came together bursting into the room with the spirit of the musical. Martin said, “The musical has been in development for 8 years and Ashmanskas has been with the show for a good deal of the time. His character was written for him. The story is about a lesbian, whose school will not allow her to go the senior prom with her girlfriend. Then some fading Broadway stars decide to go help, but instead make everything worse. This is a time in high school when you are on display. The musical satirizes both sides of the isle, but it is tougher on the liberals.” Then both shared stories about how the musical was affecting people and their lives. Martin said a girl came up to him after the show and said, “I’m in the closet and my mom is over there. I am going to come out to her, and this is going to make it much easier.” Another mother came up after a show and shared, “I was that mother in the show.”

Stephanie J. Block, nominated for best performance by an actress in a leading role in a musical for The Cher Show, shared how she discovered the Icon’s speaking voice after working with a dialect coach for over a year. One day while whitening her teeth with Crest press white strips, she was speaking to her husband from another room and he called back, “I think you’ve got it.” And she did. She had Cher’s voice. Now she had to recreate the physical sensation that produced the sound without the white strips. She said, “I have been with the show for over a year and a half, so I have had the luxury of time to build the character, which began as an impression, and then I kept going deeper and deeper. I started with the outside first, the walk and sound, and then moved to the inside. She is authentically herself, so this has been a fascinating and freeing process. Cher gave me some great advice, ‘Be a first rate you, not a second rate somebody else.’ At 46, playing Cher has helped me to embrace not only Cher, but myself. I don’t apologize, as much, anymore.” On some of her favorite moments in the musical: “When I am just in jeans, alone on stage, singing ‘The Way of Love’ and I love the moment in the Mohawk costume, when I don’t have to do anything.”

Bertie Carvel, nominated for best performance by an actor in a featured role in a play for Ink, said, “I portray Rupert Murdoch, so not being judgmental is key and imagination and empathy are necessary to bring truth to the art. The play is about what happens when you give people what they want and gets you to think about when someone disrupts the political landscape, so there is much in common with what’s happening today. The Sun was in your face, like a tabloid with depth.”J

Bartlett Sher, nominated for best direction of a play for To Kill A Mockingbird, said “The question was how to approach material that was already a book and a film. The answer is with love. Almost everyone comes to the play with existing knowledge, because most children had to read the classic in 8th grade. I don’t have a check-list. The show finds you and will surface.”

Warren Carlyle, nominated for best choreography for Kiss Me Kate. When the news of his nomination hit, he was in London working with Hugh Jackman on The Music Man, and Jackman, personally, arranged for Carlyle to be at the press junket. Speaking about Kate’s show- stopping number, “Too Darn Hot,” he said, “The concept was a jumbo jet taking off slowly, continuing to build and never pulling back with an energy build that ultimately explodes. I wanted the musical to be a Taming of the Shrew for today’s generation.”

Eddie Perfect,nominated for best original score for Beetlejuice, said “My task was to take characters that are already larger than life and then fill them out musically. The show, at its heart, is a musical comedy about death.”

Des McAnuff, nominated for best direction of a musical for Ain’t Too Proud – The Life and Times of the Temptations, said “The key to being an artist is to be a perpetual student. I am rediscovering the Temptations. I did Jersey Boys 15 years ago and I did 27 shows since then. I have had a confused career with lots of cross pollination. This show is not a jukebox musical it’s a history lesson.”

Harold Wheeler, nominated for best orchestrations for Ain’t Too Proud – The Life and Times of the Temptations, said, “Otis Redding asked him to do the orchestrations for the musical and they spoke thousands of times in the process.” When he was finished Wheeler showed Redding the work and asked, “Is there anything that bothers you? Because, if there is, I will explain the difference from a record and theater. I won’t change them, but I will show you what I had to do to make them work in context of the theater.”

Robert Horn, nominated for best book of a musical for Tootsie, said “I had to honor what was there, but make new references to stay relevant to the culture today. The desperation of the character, because he can’t get a job, makes the stakes high. We knew that Santino was a perfect fit at the first table read and wrote for him.”

Brandon Uranowitz, nominated for best supporting actor in a play for Burn This, on learning abut the nomination said, “I was home alone flying solo, and 3 friends were in the lobby of my building. As soon as my nomination was announced, they rang my bell and came up to my apartment with bagels and champagne. This is a project I have been dreaming of doing since college. It’s a water shed moment for me. Everything has led to this and everything in theater is fleeting, so I want to enjoy this as much as possible.”

Casey Nicholaw, nominated for best direction of a musical for The Prom, said “I started on this project seven years ago, and the hardest part was finding the right tone so that people could easily connect, because you have a town in the Midwest that is being invaded by Broadway stars. What’s so amazing about this musical is you hear from people that say this show has affected my life.”

William Ivey Long, nominated for best costume design of a musical for Beetlejuice and for Tootsie. This marks the theater icon’s 16th and 17th nomination, with 6 Tonys on the shelf. Long said, My challenge was making the costumes for Tootsie, based on the beloved 1982 film, hip and contemporary. The new musical takes place in 2019 and I didn’t try to copy the film, because it’s a different medium. I work to capture the essence of the original. Audiences are like dogs and children. They know if you’re not telling the truth.”

The Tony Awards, hosted by James Corden, will be broadcast live from Radio City Music Hall on CBS, on Sunday, June 9th from 8:00 – 11:00 pm.