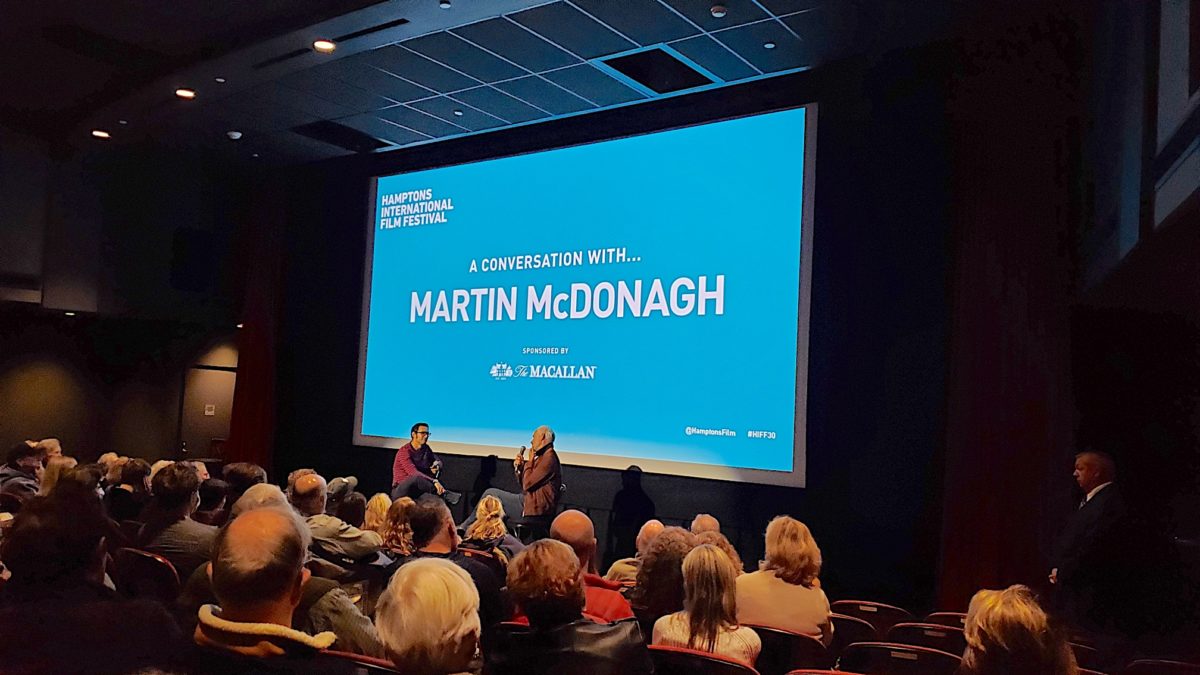 This year’s guest, Martin McDonagh, has a new film showing in the festival. He sat down for the conversation at the cinema in Sag Harbor with film critic Eric Kohn of the Indiewire for an in depth look at his films and process.

Coming from New York, where he was at Saturday Night Live the night before and up until 4am, he was, nonetheless, ready to roll and inspired to share his stories about film and theater. Ironically, the London born McDonagh, who was raised by Irish parents, wasn’t initially interested in Theater, where he found his earliest successes, after almost 8 years of toiling in television and film. He said those early works were not particularly good, because it takes almost 10 years to be accomplished. His plays include The Beauty Queen of Leenane, The Cripple of Inishmann, The Lieutenant of Inishmore, A Behanding in Spokane, and Hangmen, which was revived on Broadway this year. He has received four Tony Award nominations and five Olivier Award nominations, winning three of them, not to mention his BAFTA, Golden Globes, and other numerous awards.

McDonagh first came to HIFF in 2004 with his short film, Six Shooter, which went on to win the Academy Award that year for Best Live Action Short. His other films includ In Bruges, Seven Psychopaths, and probably his most commercially successful, Three Billboards Outside Ebbing Missouri. He writes and directs and now even produces because he likes to have the final say in everything. McDonagh has been influenced by a wide range of films, especially American movies of the 1970s, films of DeNiro and Scorsese, which led him to Orson Wells and the best of the foreign directors.

One element, which is always present, in McDonagh’s work is shock, but this is not planned or premeditated. Those unexpectedly dark and sinister moments, which have the power to take your breath away and leave you uncertain, if you should laugh or cry, come from the logic of his characters. The most shocking moments are rooted in the character’s truth, as they reveal themselves to him. And what they do can be disturbing.  McDonagh said, “Life is like that.”

He never knows where his stories are going or how they will end. The plot twists come out of the character development and since McDonagh does not know what his characters are going to do or say, he, too, is surprised. And he is, also, compelled to follow where their actions take his story. His process is fascinating. He becomes the characters, responding to the people and the situations in their life, as they unfold in the moment. The result is a release from his initial set-up based on the crazy weird logic of his characters.

McDonagh writes in longhand and when a script is finished, cast and ready to film, he likes to rehearse two to three weeks before production begins. His film budgets are modest, but not small, ranging from 15 to 20 million. The Banshees of Insisherin was on the higher end because of the foreign location.

The idea for The Banshees of Insisherin, a film that examines aspects of the human relationship amidst the beauty of Ireland,came to McDonagh three years ago. Set on a picturesque Island, off the coast of Ireland, and told with only a handful of characters, the story is about the break-up of a friendship between two men. McDonagh attempts to reveal the sadness of the break-up from both sides of the conflict as truthfully as possible, leaving only a small measure of hope. McDonagh feels all his films have a measure of hope, which, often, may be difficult to find. The sound and truth of his characters is his primary commitment, to paint the people truthfully.