January 17, 2023: The 37th Annual Tribute to Martin Luther King, on the morning of January 16th, 2023, at The Brooklyn Academy of Music delivered a wham bang wake up call. Contemporary gospel-style music performed by the youthful voices of the Harlem Sings Choir made the morning soulful. 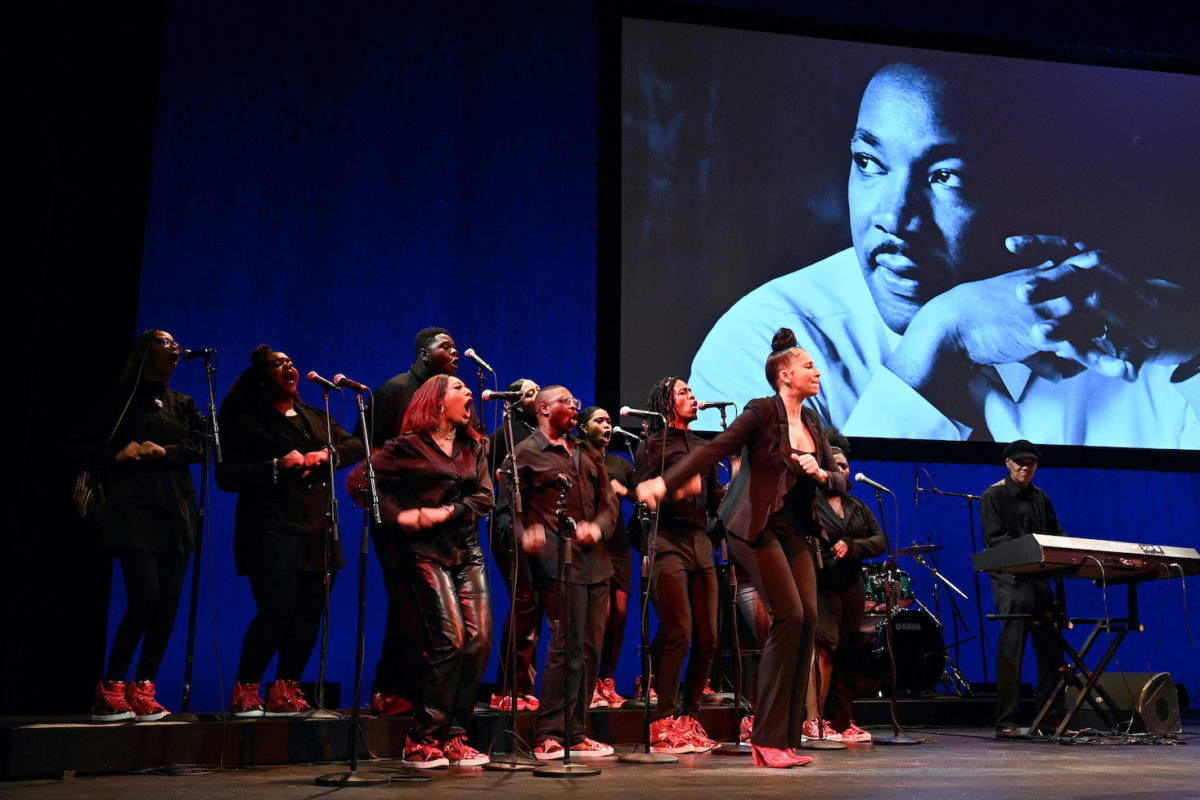 January 17, 2023: The 37th Annual Tribute to Martin Luther King, on the morning of January 16th, 2023, at The Brooklyn Academy of Music delivered a wham bang wake up call. Contemporary gospel-style music performed by the youthful voices of the Harlem Sings Choir made the morning soulful.

Clad in all-black with sparkling red sneakers, they sang about change, their commitment to “community”, and their gratitude to Dr. King for what he has given us.

Award-winning singer/musician, and activist Allison Russell, and her 3-woman band evoked the sound and sensibility of native voices. It’s as if Russell’s voice, and her music spring from some deeply rooted, invisible source. We hear a kind of tearing away, a cry suggesting aloneness, and the beauty of her incantations.

Singing, and dancing in deft, organic rhythms, Russell’s ululations pierce social barriers. When she sings that babies are “taken, sold, and sold again,” and about the dream of freedom, we feel her commitment to the land, to the soil of Democracy.

Civil rights leader Sherrilyn Ifill, addressed the theme of this year’s tribute – Defending Democracy. As Ifill opined, the battle has escalated, and we are experiencing a multitude of losses – overturning Roe v Wade, expanding gun rights, and thereby facilitating violence. “They are fighting to maintain white supremacy,” she said.

In her evocation of Martin Luther King’s legacy, she talked about his belief in power – not only dreams. That Dr. King preached the power of nonviolence, and believed that moral power would surface from it, is among his most abiding principles. This sense of mission was the focus of the morning’s tribute.

Reynoso spoke about King’s commitment to selflessness – his earnest belief that we must do more for one another. Joining the dialogue, and delving into the long line of 60’s civil rights leaders, House Minority Leader Hakeem Jeffries spoke to the history of the civil rights movement commenting ironically, that earlier activists did more with less. Without “even Twitter” they achieved their goals because “they had faith, and they had each other,” Jeffries declared emphatically.

His words echoed in Russell’s performance of her popular song, “You’re Not Alone”. “In the cradle of the circle …All the ones that came before you…Well, their strength is yours now…You’re not alone.”

Among the most articulate speakers, NYC council member from Brooklyn, Cyrstal Hudson, talked about Dr. King’s humanizing influence. He believed in radicalizing people, rather than leading us into despair. “Change, change, change,” was what he sought – “through continuous struggle,” Hudson affirmed.

While change is still a struggle, the morning’s pronouncements addressed our responsibility as citizens to protect our rights, and those of all people in our community.