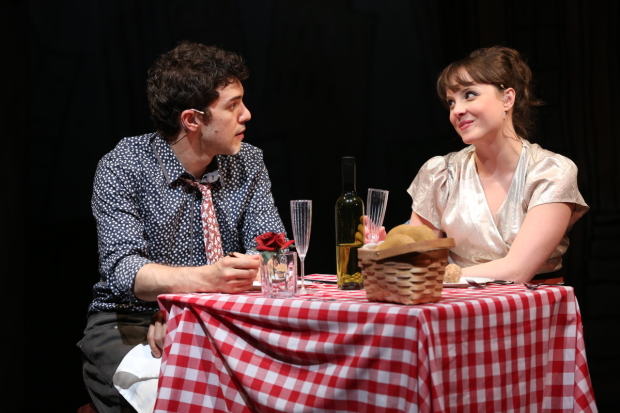 The show, smoothly directed and choreographed by Bill Castellino, is set in the East Village, where Harry (Lenny Wolpe) and his 30-year-old son, also named Harry (David Spadora), run a not very successful Italian restaurant. Harry Sr. keeps coming up with schemes to keep the restaurant going, like introducing an international cuisine that features a different country every night of the week. Harry Jr. wants to jump ship and become sous chef at a fancy uptown restaurant.

Not long after Harry Jr. gets the courage to tell his father about his plans, he meets Sherri (Morgan Cowling) and love strikes like a clap of thunder. Backed by her overly ambitious mother, Francine (Robin Skye), Sherri quickly insinuates herself into both Harrys’ lives. Will infatuation or common sense carry the day?

Marry Harry might be a pleasant, if somewhat unexceptional musical romance if not for the brilliant interpolation of the three Village Voices (Ben Chavez, Jesse Manocherian, Claire Saunders). This modern day Greek chorus both comments on and facilitates the action.

When the chorus first appears, they are dressed in louche Berlin cabaret black. But they soon shed these garments for wedding dresses (Francine and Sherri go shopping) or sous chefs coats and hats (Sherri and Harry Jr.’s first date). They also discreetly draw the curtain over Sherri and Harry Jr. at the end of that first date.

If Spadora and Cowling make an appealing couple, Wolpe and Skye make their parents easily recognizable to young and old. Wolpe is good-natured and old-fashioned, the father we all want, unless he actually is our father. Skye is pushy, shrill and status-conscious, the mother nobody wants, especially if she is our mother.

Martin and Biello have written a consistently upbeat and melodic score that mixes humor (“Nonnina’s Biscotti”) with romance (“You Opened a Door”). The songs require an emotional range and a comic timing the cast has mastered handily.

James Morgan has provided a pop-art set, reminiscent of Red Grooms’ work, that captures much of the quirkiness of New York City. The set also allows the chorus to appear in unexpected places.

For enthusiastic foodies and hopeless romantics, Marry Harry is delicious treat that’s good for the diet and the heart.