November 22, 2021: Before I say another word, let me spill out my gut reaction to the revival of Man of La Mancha that just opened at Plaza Broadway Long Island’s theatre in Elmont, Nassau County’s only Equity company. I have a few quibbles, as expected, but cumulatively, it’s a great show that entertains you, moves you, and makes you think about how to be a better person. The music remains marvelous, and the actor playing Cervantes/Don Quixote, Bruce Rebold, is superb. 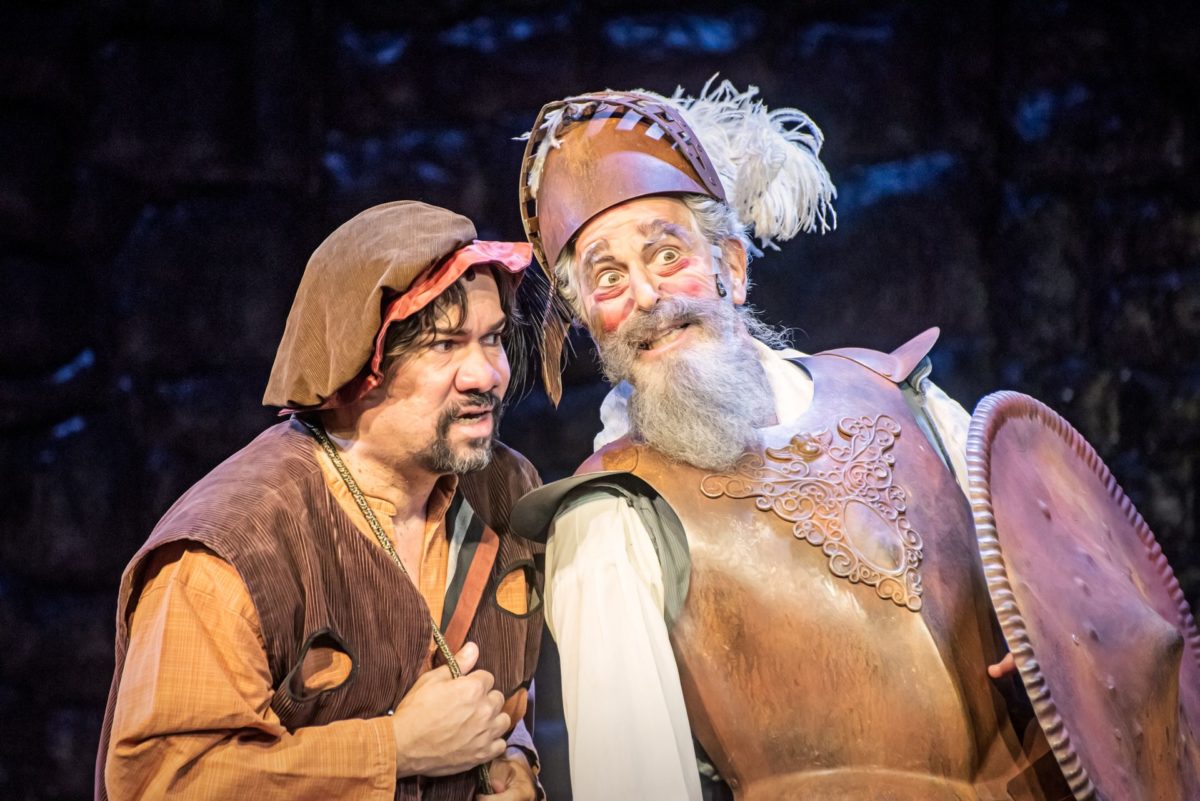 Bruce Rebold and Tony Castellanos as Quiixote and Sancho.

November 22, 2021: Before I say another word, let me spill out my gut reaction to the revival of Man of La Mancha that just opened at Plaza Broadway Long Island’s theatre in Elmont, Nassau County’s only Equity company. I have a few quibbles, as expected, but cumulatively, it’s a great show that entertains you, moves you, and makes you think about how to be a better person. The music remains marvelous, and the actor playing Cervantes/Don Quixote, Bruce Rebold, is superb.

Mr. Rebold is part of the reason I’m going to step back for a minute to share a few personal things that seeing Man of La Mancha brings up. If you want to skip to the review proper, it’s a few paragraphs down, where the italics stop.

I saw the original production, starring Richard Kiley, in 1964, when it played in a huge, temporary structure adjoining Greenwich Village’s Washington Square Park; this, as you probably know, was the forerunner of the Vivian Beaumont Theatre at Lincoln Center.

The young actress playing Antonia, who participates in the sprightly “I’m Only Thinking of Him,” and can be heard on the original cast album, was Mimi Turque. I’d briefly known her from when we both appeared in Brooklyn College’s 1959 production of Romeo andJuliet. She, a professional actress since early childhood (she appeared, believe it or not, in the original Carousel in 1946), played Juliet, beautifully. I, a mere freshman, was Romeo’s flunky, Balthasar, with one or two lines. Mimi, a senior, graduated soon after and we didn’t meet again for years.

Mimi, whose family name was Strongin (if you’re Googling the Carousel cast list), became Turque when she married Mick Turque, the production stage manager of Man of La Mancha. The show was directed by Albert (Albie) Marre, husband of Joan Diener, who played Aldonza. Years later, Mick became my professorial colleague at Brooklyn College, leading to my establishing a warm, long-lasting friendship with Mimi, which exists to this day. In the course of time, Mick passed away and Mimi married the widowed Albie Marre, who also has since left us. Thus Mimi retains an abiding connection to the show, which is constantly being produced somewhere in the world.

One of the more curious international connections this led to was when Man of La Mancha was playing on Broadway in 1970 and the management did an unusual bit of stunt casting for its latest leading man replacement. They chose Ichikawa Somegorō, a 28-year-old kabuki actor who knew only Japanese and had to learn the difficult role phonetically. Somegorō, as per the kabuki custom, later took his father’s more important name, Matsumoto Kōshirō, who, in turn, became Matsumoto Hakuō I. After his father died, Kōshirō became Hakuō II.

Over the past half century, Hakuō developed as one of Japan’s most versatile stars, concentrating not just on the traditional theatre of kabuki but Western classics, like Hamlet, and Western musical theatre, playing the leads in Fiddler on the Roof and The King and I, which he performed in the West End. He made a particular specialty of Man of La Mancha. Because Mimi and Mick—who was still in charge of the show backstage—had become his virtual caretakers while he was starring on Broadway, Mimi was invited to Japan a few years ago when Hakuō was scheduled to reach some world-record breaking performance number as the Knight of the Woeful Countenance.

One of my biggest regrets is that I, as a much-published scholar of kabuki—was not in touch with Mimi during the period when the then-Somegorō was living in New York. I would love to have had the chance to get to know him. But now I know another Man of La Mancha, Bruce Rebold, star of the current Long Island revival. Like my relationship with Mimi, that with Bruce had a long gap between its beginning and now.

Bruce was a premed student at Brooklyn College around the time that Somegorō was appearing on Broadway. He also got involved in the college’s theatre activities. He later informed me that he took one of my classes, although I remembered nothing of it. Our unexpected reunion happened several years ago when he spotted me at an event related to a Yiddish show he was in that I was covering at New York’s Museum of Jewish Heritage. Like Somegorō in Man of La Mancha, he learned all his Yiddish lines phonetically. He introduced himself to me and we began a friendship on Facebook. I also saw him in another Yiddish show.

And what had this handsome, graying, Jewish fellow from Brooklyn been doing all these years? Being a successful OB/GYN physician on Long Island! Moreover, he was filling his spare hours when he wasn’t delivering babies delivering musical theatre performances at local community and semiprofessional theatres.

Several newspaper articles about his unique mixture of medical scrubs and theatrical costumes have appeared over the years, so there’s nothing much I can add other than to note I was a little hesitant to see him as the star of such a difficult show. At the Folksbiene he’d been a member of the ensemble, polished, yes, but without the opportunities to sink or swim provided by playing a dual role like Cervantes/Don Quixote. Since I was going to write about it, I prayed that he’d be at least good enough so that judging wouldn’t require fudging.

Here’s where I switch to roman typeface and offer my verdict. Folks: Bruce Rebold is the real thing. Cervantes/Don Quixote is a major undertaking. It not only requires huge amounts of energy to fight, sing, and emote—except for a complex bit of musical staging, it’s not a dancing role—but the actor must dig into his soul to reach deep springs of feeling required by the big, famous songs. The moment Bruce, as I’ll call him, began to sing “Man of La Mancha” with his comic servant (the very good Tony Castellanos), who morphs into Don Quixote’s sidekick, Sancho, I knew I was in sure hands.

When he eventually reached the classic power ballad, “The Impossible Dream,” Bruce could do no wrong. This exquisite song, among the grandest of its sort in the entire Broadway canon, is led up to by a colloquy with the whorish Aldonza (Cristina María Castro), in which she points with rapier cynicism at the maggot-ridden world’s evil. In response, the eternally optimistic Don sings, in Bruce’s resonant, powerful baritone, of his quest, despite impossible odds, “To fight for the right, without question or pause . . . , To be willing to march into Hell, for a Heavenly cause.”

Every line’s interior meaning resonates as the song soars, to where, in Bruce’s vibrant rendition, you actually feel the pain of living in our world and hoping you, too, can bring to it the radiant goodness and hope for a better world Don Quixote embodies. It’s been a long time since I was so affected by such musical magic.

Bruce brings similar feeling to the nonmusical parts of his performance, capturing both Cervantes’s self-important theatricality as a striving poet, and the pathos and confusion of Don Quixote, on his mad, selfless mission to slay the demons that mar our existence. Given the moral and physical sickness afflicting today’s world, it’s impossible not to see the necessity of his vision, deluded as it may be, for our continued survival as a species.

Ms. Castro, who gives an equally powerful performance, comes into her own whenever she sings. At first, she seems too slender and girlish for the role of Aldonza, a crude spitfire who dismisses the men she cavorts with by spitting freely and claiming in the song “It’s All the Same” that one pair of male arms is no better than any other. Late in the show, beaten and bruised, she sings her passionate heart out in “Aldonza,” a dark number that Ms. Castro searingly brands on your heart.

Of the show’s plot I’ll note only that it’s set in a late sixteenth-century Spanish dungeon where author Miguel de Cervantes is thrown to await a trial by the feared Inquisition. While there, the dangerous inhabitants put him on trial themselves, and his defense is to provide scenes from his Don Quixote story, carried about in a large manuscript.

As he tells his tale, his fellow prisoners assume its characters. Much of it deals with their skeptical, mean-spirited reaction to Don Quixote’s saintly innocence, which prevents him from accepting the wickedness in others. Believing that men must treat women chivalrously, he treats Aldonza, the slut, as though she were the purest virgin, memorializing her in song as “Dulcinea,” a gesture she refuses to accept.

Dale Wasserman’s book, more moving than ever, is supported by a distinguished score of melodies and lyrics, many of which have permanently wormed their way into our ears over the decades. The Elmont company is blessed with an abundance of talented singers. For instance, Tony Castellanos brings sweet humor to songs like “I Like Him.” The nasty Muleteers (Luis Herrera, John Jeffords, Jorge Echevarria, Jason Yanto, and Matt Petromilli) join harmoniously on “Little Bird.” The lovely “The Psalm” is delicately sung by the Padre (Rodrigo Ignacio Cruz). And in “I’m Only Thinking of Him” (which segues into “We’re Only Thinking of Him”), the number immortalized by Ms. Turque Marre (with Robert Rounseville and Eleanore Knapp), Maria Tramontozzi does beautifully (with Mr. Cruz, Paulette Oliva, and Sam Brackley).

Kevin Harrington’s direction avoids gimmicks and offers a solidly traditional Man of La Mancha, getting expert performances down the line. Jeremy Smith’s dungeon setting, with its rear staircase that rises and lowers on chains, is satisfactory, but might look more impressive if Glen Davis’s sometimes sketchy lighting were more imaginative. Also, a couple of blackout transitions were notably clumsy when I attended; hopefully these will be smoothed out during the run.

Not having seen a live performance of Man of La Mancha since the original 1964 production, I was deeply impressed by how well the book and score continue to hold up. Of course, this is greatly helped by the presence of the charismatic Bruce Rebold in the present production. And there’s not a drop of fudge in that judgment.