March 28, 2022: Domestic abuse, at the center of John J. Caswell, Jr.’s “Man Cave,” is the enemy, and it’s punishable by death. At least Rosemary (Jacqueline Guillen) won’t settle for less. But her husband is a cop. No one will believe her story. 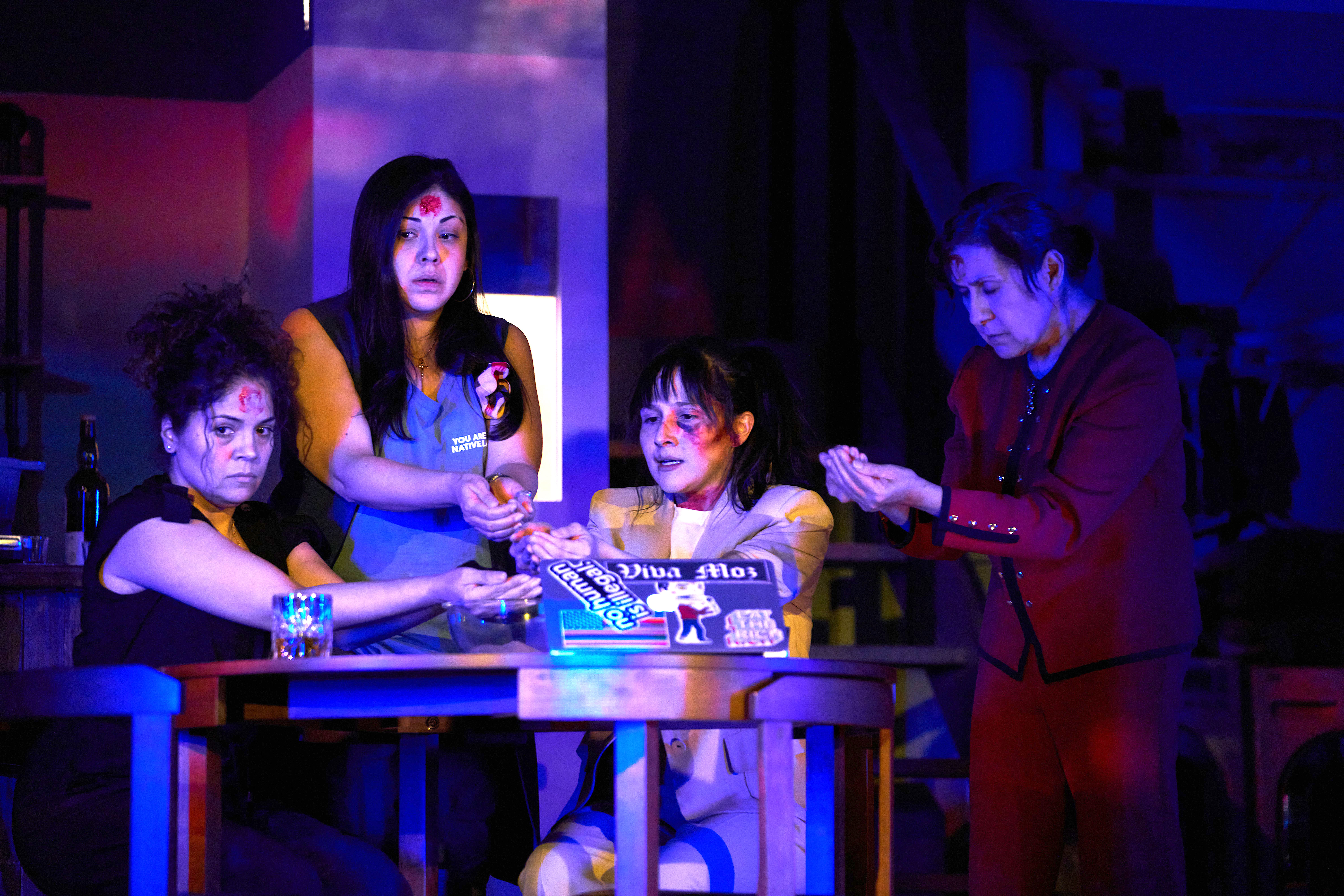 March 28, 2022: Domestic abuse, at the center of John J. Caswell, Jr.’s “Man Cave,” is the enemy, and it’s punishable by death. At least Rosemary (Jacqueline Guillen) won’t settle for less. But her husband is a cop. No one will believe her story.

Running off with her lesbian girlfriend, Lupita (Claudia Acosta), the two young women seek refuge from their friend, Imaculada (Annie Henk).  As the live-in maid to a right wing politician, she has sold her soul and her body to a man who is hiding a multitude of buried bodies under his home…a fortress really.

Whether or not those bodies have turned into the ghosts that Rosemary sees, it doesn’t matter. The ghosts she’s talking to are macabre, and ghoulish. They deliver strange extraterrestrial messages in the form of creaky sounds, forcefully shutting windows, and slamming doors. They’re the real thing…as far as ghosts go.

Set in the Arizona desert, each of the characters in this women’s tale are of Mexican heritage. They bring a delightful sense of magical realism to the play. Even more than Thelma and Louise, they prove themselves single minded and efficient at getting results.

As directed by Taylor Reynolds, the production is creepy and charming at the same time. Using the paranormal to cast light on the humanity of these women is an imaginative device that is played in a comedic way.

Later, when Rosemary’s mother Consuelo (Socorro Santiago) joins them, we learn more about dismembering evil. She brings first-hand experience with ancient cultural rites, the likes of Santeria and Yoruba. Such religions are based on developing personal relationships through sacrifice, initiation, and the use of mediums. To the audience, it looks like witchcraft.  But it enables the characters to alter their fate, and that of the evil cop haunting Rosemary.

Performing rituals like over-eager girl scouts on a camping adventure brings out the comedy. But it also brings out their compassion, their loyalty to one another and the genuine values they hold.

Otherworldly elements are found in other works by Caswell, including “Scene Partners,” about a septuagenarian who is a wannabe movie star. Contrary to expectations, the supernatural is a tool the playwright uses to unearth the humanity of his characters. It also holds suspense because it makes the narrative unpredictable.

While Reynolds keeps the action moving, Rosemary’s conversations with the ghost go rather slowly, and sometimes her speech gets garbled. Still, the actor brings her sarcasm, and her sense of urgency in portraying a strong woman, as she approaches her day of reckoning.

Both Imaculada and Lupita are transformed by the experience, bringing them to the realization that they also must find paths to free themselves from the rule of men. True to the play’s comedic underpinnings, they all land happily on terra firma.

Adam Rigg’s fascinating scenic design plays on the taxidermy on the wall, hiding the dead bodies behind. While performing their women’s rites, the moose head gets thrown from its perch. We’re left staring into the caldron that is behind it.

Creating the “Man Cave,” Rigg brings in earthy materials – dark wood, and leather. On the other side of the basement, however, are the womanlier objects – washing machine and dryer. Setting the entire basement into a 3-dimensional frame, makes us feel like we’re watching the story in wide screen, like a film.

Michaelf Costagliola’s sound designs are loud and unnerving. Atmospheric lighting by Lucrecia Briceno and strange projections by Gregg Bellon round out the ghost story.

While the narrative is reminiscent of women’s consciousness raising groups of the 70’s and 80’s, this gathering of truth seekers, makes for an especially glowing campfire.