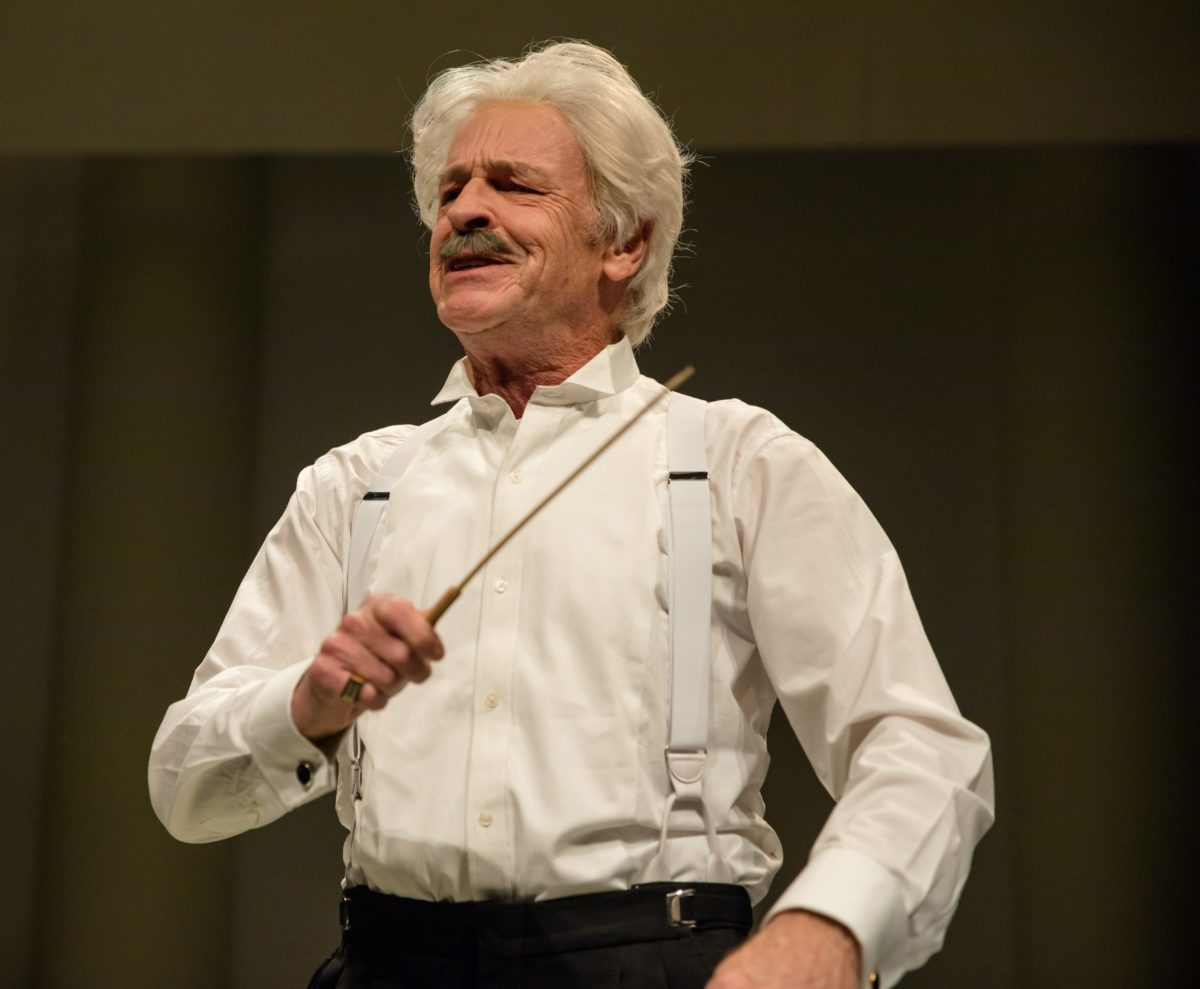 Set to an orchestral suite from Ottorino Respighi’s Antiche Danze ed Arie (Ancient Airs and Dances), a video projection (David Bengali) of a puppet-like sheet folds and unfolds, swirling infinitely. Meanwhile, the Maestro describes his creative process, about setting music in motion. “I have to think through the components of the work’s structure—the motivic unit within the phrase, the phrase within the period, the period within the section.”

Indeed, the dancing sheet, so to speak, translating the music into a softly flowing image, creates the experience of synesthesia, akin to Basil Twist’s Symphonie Fantastique. A series of pastoral and melodic images offer a welcome contrast to the historical footage of invasions, Nazi rallies, and the historical events surrounding Toscanini’s later life.

Set in 1938, the show opens on him, conducting the NBC Symphony Orchestra in a recording of Aida – the quintessential war romance. But, the very act of producing this recording, while not explored here, highlights the fact that radio, and recorded music had become popular for the first time, during WWII.

Indeed, the worldwide distribution of electronic recordings forged a unique relationship between warfare and music. And with centralized production, governments could also control the style of performance, and the content. Needless to say, all of this had far reaching effects then.

Here, the works of Wagner and Verdi, among other, mostly Italian composers, are performed by a quintet of piano and strings. Most impressively, Zhenni Li performs the piano with passionate, dramatic sensibility, and Ari Evan plays the cello with clarity and distinction. The violinists, Mari Lee, and Henry Wang, and Matthew Cohen, violaist carry the melodies richly. In Act II, a lone trumpet player, Maximilian Morel, arrives for a standup rendition of Gershwin’s Rhapsody in Blue.

About Toscanini, the autobiographical play gives context to his career. As the Italian Maestro, John Noble (Lord of the Rings) narrates his experience as a world-famous conductor who his thrown out of his beloved Italy for his opposition to Mussolini, and the Nazi war effort.

To this end, Noble expresses, the characteristic traits of the famous conductor – his passionate temperament, uncompromising standards, and his infatuation with a younger woman 30 years his junior. He was no angel, and he led a passionate life.

Far from traditional storytelling, the production, helmed by Donald T. Sanders, invites us to feel the music, the war, the man.