Based on a Shady Lady lecture by Edith de Belleville.

February 10, 2022: Françoise de Rochechouart’s path to becoming the favorite of Louis IV The Sun King, was paved with opportunity. Hers was one of the most well regarded noble families in France. Madame de Rochechouart acted as lady in waiting to Anna of Austria (Louis IVs’ mother and the Regent). Francoise was convent educated and very genteel. At 20, she became maid-of-honor to the king’s sister-in-law. Feeling her name was commonplace, Francoise changed it to Athénaïs. At 23, a suitable marriage was arranged with the Marquis de Montespan. Barely nine months later, their first child was born among gossip. Another would follow. Our host points out it was unwise to grow close to progeny who were more than likely to die young. The new mother was uninvolved. 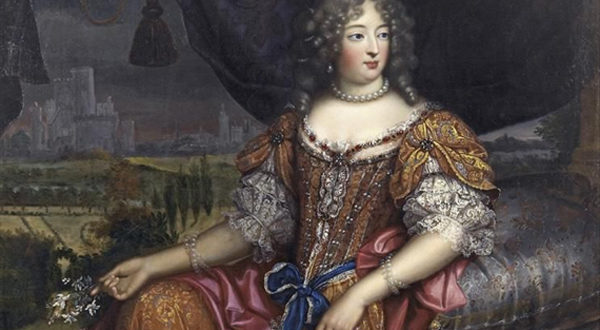 Based on a Shady Lady lecture by Edith de Belleville.

February 10, 2022: Françoise de Rochechouart’s path to becoming the favorite of Louis IV The Sun King, was paved with opportunity. Hers was one of the most well regarded noble families in France. Madame de Rochechouart acted as lady in waiting to Anna of Austria (Louis IVs’ mother and the Regent). Francoise was convent educated and very genteel. At 20, she became maid-of-honor to the king’s sister-in-law. Feeling her name was commonplace, Francoise changed it to Athénaïs. At 23, a suitable marriage was arranged with the Marquis de Montespan. Barely nine months later, their first child was born among gossip. Another would follow. Our host points out it was unwise to grow close to progeny who were more than likely to die young. The new mother was uninvolved.

The Montespans lived in a small house near the Louvre which allowed Madame to attend court and carry out her duties. “Blonde, blue-eyed, and curvy, but not too much,” then attributes of universal beauty, she was widely praised. Athénaïs’ marriage began happily enough, but the marquis had a roving eye, gambled, and spent his wife’s money. His practical, ambitious wife began to focus on a greater prize, the king. Her next position would bring the girl in close proximity. She became lady-in-waiting to Louis’ wife, Marie Therese of Spain. (The queen had been a political match. She’s said to have lacked the wit to keep up.)

Louis IV (1638-1715), the longest running ruler in European history, assumed the throne at age five. He was raised on the divine right to rule. During tenure, he built a strong central government.The king was an athlete and a dancer. In fact, he performed 80 roles in 40 major ballets. His extravagant support/patronage of the arts is as well documented as the profligate spending that brought him down. The king was also, we’re told, quite shy. He secured a succession of virgins without much effort. No one lasted very long.

Athénaïs wormed her way into the confidence of Louis’ current favorite/mistress of five years, Louise de la Valliere. Louise loved the king, but she was fragile and somewhat naïve. Her successor, on the other hand, arrived confident, charming, and, de Belleville adds, had good teeth, an anomaly at the time. She was witty and something of a Scheherazade, both highly valued at court, and, here’s the clincher, not a virgin. Apparently De Montespan held out for years, presenting a pious front. She wanted more than sex. Louis was unaccustomed to resistance. In late 1666, both his wife and Louise were pregnant at the same time. The lonely king turned to Madame de Montespan. Her sexual hold was powerful. It’s said Louis would often ‘start’ even before an entourage exited.

All this occurred during The Great Century of France, its Golden Age. Advancement came not only with the seven lively and scientific arts then lead by men, but also first stirrings of feminism. Romance novelist Madeleine de Scudery championed courtly platonic love and the rights of women to chose their own husbands and shape their own lives. Active in a literary movement called Les Precieuses, the authoress declared she’d never get married because women who were slaves to their fathers only became slaves to their husbands. Madame de Montespan was aware of these new ideas. Perhaps they inspired her.

Our host gives us a glimpse of 17th century fashion and make-up. “Women had to be very white showing they didn’t work, especially in the fields.” Foundation covering face, neck, hands, arms, and décolleté was made from white lead and later applied thickly so as to also hide wrinkles. One can only imagine the discomfort and toll on skin.  Red was then added on lips and cheeks of women and men alike.

De Belleville then regales her audience with the art of beauty spots, les mouches. Where one placed the spot was a code. The corner of the left eye meant passion; just below the corner of the left side of one’s mouth, discretion; one’s left cheek gallant/flirtatious. Beside the right side of the mouth, it indicated a coquette and on the nose in the market. There was also a code for fans indicating availability or its lack. Drawing the fan across one’s cheek meant ‘I love you’, while twirling it in the left hand signaled ‘We’re being watched.’ One had to be well schooled.

Athénaïs’ hold on the king increased. She built up his confidence. “Behind every great man is a woman,” de Belleville quotes. Changes in character/behavior were recognized and documented even at the time. (Louise couldn’t compete.) In turn, Louis gave her more than jewels. Having set her up in an apartment next to his own, replete with a separate entrance, he then built his lover Le Trianon on the grounds of Versailles.

It was traditional for the king to spend nights with his wife or in his own bedroom, but days were fancy free. “She was spoiled. It’s said at one point his mistress set a bear loose inside so that everything would be destroyed and she had to redecorate.” The new favorite had seven children in ten years. Four grew to adulthood. A woman of great taste, she’s credited with a great deal of the aesthetics of Versailles.

Little by little, the king resumed being unfaithful. Athénaïs was a lot to handle. She acquired enemies at court. Still our heroine knew where her bread was buttered. She saw to it that he legitimized her children. A special law was created to facilitate this. Paperwork shows no mother’s name. (The practice also occurred in England.) The children could then be given titles and would be married to secure appropriate alliances.

Children on premises required a nanny. There are, the host declares, three rules for seducing a king: 1. Master the Art of Conversation. 2. Reinvent yourself. 3. Beware the nanny. This one, Madame de Maintenon, was Athénaïs’ opposite- discreet, quiet, calm, and a brunette. Having decided his mistress was “too much,” the king turned to someone more restful.

Scandal arose with The Affair des Poisons, when Athénaïs was caught with either something she thought was an aphrodisiac or poison depending on whose story one credits. “Most people said she had to leave Versailles because of it.” Based on her own research, De Belleville believes she was innocent.

The ersatz ménage a trios wasn’t maintained for long. Seventeen year-old Angelique, the Dutchess of Fontanges, had caught Louis’ eye. Curiously, Athénaïs had put Angelique in the king’s bed thinking the teenager would become her puppet. Instead Louis fell in love. The usurper, however, conveniently died just a few years later. Echoes of the scandal did not. Athénaïs was exiled and took refuge in an abbey.

Louis IV promptly married Madame de Maintenon in a Morganatic wedding. (Marriage between people of unequal social rank, which in the context of royalty prevents the passage of the husband’s titles and privileges to the wife and any children born of the marriage.)

Athénaïs de Montespan died at the age of 65 while taking the waters at Bourbon-l’Archambault. The king refused to let her children wear mourning for her.

An entertaining series called Versailles, set during the reign of Louis XIV and its construction can be found on Netflix.

Edith de Bellevillle is a charming lecturer with great empathy for her subjects. Pictorial accompaniment is excellent. I look forward to future lectures. As she had a finite amount of time, I embellished on her talk with salient and/or colorful details.

Parisian native Edith de Belleville was an attorney at law for many years, but her passion for Paris and its history led her back to university (at the age of 50) to get her official tour guide license. Deeply inspired by Parisian women of the past, Edith decided to write a book, in French, entitled The Beautiful Rebels of Paris (Belles et Rebelles, Editions du 81). Alas not yet translated into English.

Learn about the fascinating women of the past—shady ladies, nasty women, fashion icons—in  fun and revealing tours of the world’s great cities and museums