September 16, 2022: “I’m more interested in what a costume is about, rather than how it’s made. I don’t need precise lines. I want the story…I’m an audience-oriented designer.” Machine Dazzle 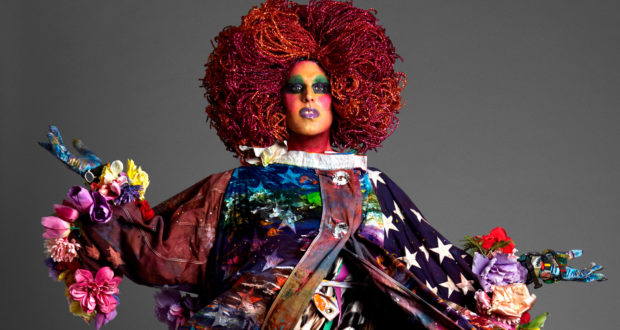 September 16, 2022: “I’m more interested in what a costume is about, rather than how it’s made. I don’t need precise lines. I want the story…I’m an audience-oriented designer.” Machine Dazzle

Machine Dazzle, formerly Matthew Fowler, is a maximalist designer of costume and set (as well as a performer) who “counters the prejudices of high culture regarding spectacle, extravagance, and the overly decorated as vapid or meaningless… (embracing) queer liberation that affirms hybridity over purity, challenges cultural hierarchies separating high from low, and celebrates different kinds of bodies.” (Quotation from the exhibition signage.) Translation: the flamboyant, utterly groundbreaking artist doesn’t believe in established tradition/appropriateness or limitation.

A 6’5” gentle, thoughtful person with a halo of curls and a twinkle in his gimlet eye, Dazzle arrived in New York from Houston, Texas  in 1994 via the University of Colorado, Boulder where he studied art. Two other UC alumni living here were members of the Dazzle Dancers founded by writer/performer Mike Albo. During the day the newbe held a multitude of jobs. At night he went clubbing and/or performed in the troop.

Museum signage describes the Dancers as “a performance group best characterized as Solid Gold Dancers meets radical cultural liberation…known for their cheeky sense of humor mixed with a propensity to get naked.” Machine began to make their costumes. His reputation grew. There were other commissions. The Dazzle Dancers performed during the exhibition opening, at first wearing long, colorful Arabian veils and swinging fringe, then nude. Movement was well coordinated fun, part tribal, part uninhibited rave. Everyone’s phone cameras came out. No one hesitated. It was celebratory.

Packed among Fowler’s  “things” (one never knows what one might need) when he arrived here was a large bag of milk bottle tops that said HOMO, for homogenized. One of his first local creations was an eye catching skirt constructed out of these. His outrageous Halloween Parade concoctions are legendary.

Early on, connecting with like-minded community, Dazzle and the equally inventive (hard to imagine this possible) actor, singer, writer, director Taylor Mac found themselves kindred souls. The two collaborated on The Lily’s Revenge (2009), Walk Across America For Mother Earth (2012), the Pulitzer Prize-Nominated A 24-Decade History of Popular Music (2016-present), and, most recently The Hang, a musical of Socrates and his downfall that plays out with contemporary parallels. (By Mac and Matt Ray.)

An Apple and Costumes

Though the exuberant Walk was play length with limited characters, Lily was five hours of an uprooted flower on a journey of self discovery. All of HERE (the theater) looked like a giant animated garden on steroids. Puppets joined 40 actors, dancers, and musicians. Experimental visuals were wonderful. The 24 hour History, eliminating a musician every 60 minutes, revealed 24 changes, each making a sociological statement. (Some are exhibited.) Dazzle has also worked with Julie Atlas Muz, Justin Vivian Bond, Chris Tanner, Bombay Ricky, Opera’s Philadelphia Dito and Spiegleword, among others.

In a first time solo exhibition of Machine Dazzle, the museum shows more than 80 of his creations for stage, film, spectacles, and street theater, plus material samples, ephemera, photography, and performance video on floors four and five as well as a glimpse of a temporary workshop on six. Give yourself lots of time. This is a riot of color, texture and unexpected combination. “Explanation” for such as  the 24 Decade extravaganza give one a glimpse into the way his mind works. It’s FUN, but also masterful.

The source of moniker Machine Dazzle is in dispute. Signage declares it’s “an unlikely juxtaposition of the word for an apparatus powered by an engine and the verb meaning ‘to take one’s breath away’ or to ‘temporarily leave one blinded’ (in a good way.)” Others say Fowler was “a dancing machine.” A company member in my elevator commented the artist created in a frenzy- like a machine. Dazzle, of course, comes from the artist’s membership in the Dazzle Dancers.

Opening photo by Gregory Kramer by Permission of MAD