May 1, 2022: Tomorrow and tomorrow and tomorrow creeps in this petty pace from day to day to the last syllable of recorded time and still I await a production of Shakespeare’s Macbeth that truly captures its weird world of witches, war, and wickedness. The tragedy was seen locally during the last decade in several forms, including a version expressed through the actions of a pack of teenage girls. There was also a recent movie, imperfect but interesting, starring Denzel Washington and Frances McDormand. 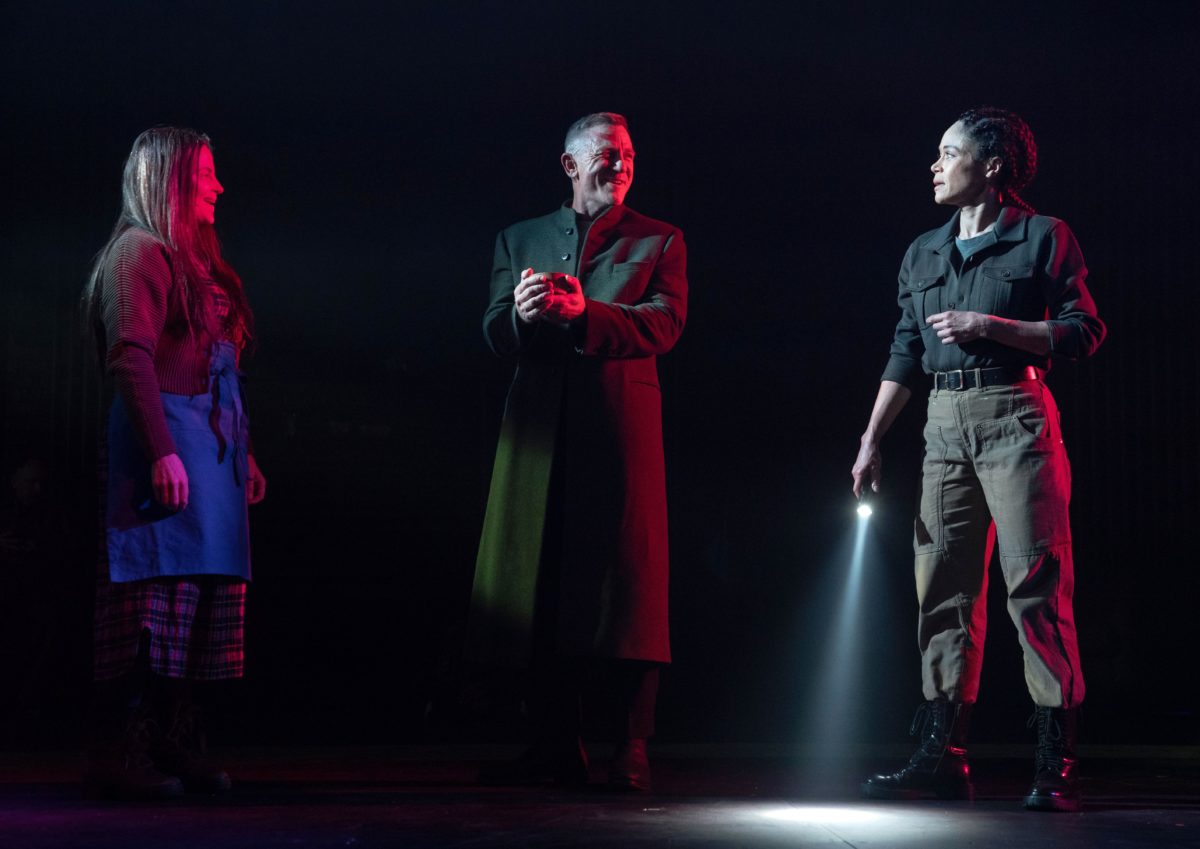 May 1, 2022: Tomorrow and tomorrow and tomorrow creeps in this petty pace from day to day to the last syllable of recorded time and still I await a production of Shakespeare’s Macbeth that truly captures its weird world of witches, war, and wickedness. The tragedy was seen locally during the last decade in several forms, including a version expressed through the actions of a pack of teenage girls. There was also a recent movie, imperfect but interesting, starring Denzel Washington and Frances McDormand.

Macbeth is now on Broadway in a WTF? production directed by Sam Gold. Starring are the ultra-bankable British movie star Daniel Craig (Bond, James Bond, for those who live on Mars) and the rising Ethiopian-Irish actress Ruth Negga, who provided a widely lauded (not by me) Hamlet in pre-pandemic Brooklyn.

If you’re an aficionado of stage lighting, however, this will be the Macbeth you’ve been waiting for. Aside from the natural wattage of Mr. Craig and Ms. Negga, Mr. Gold’s idiosyncratic staging would be little more than eye of newt without the remarkable tricks designer Jane Cox creates with color and shadow, pinpoint spots, strobes, crisscrossed beams, lightning flashes, and all the other wizardry of her magical lighting console.

For the rest: ugh. If you resisted—as did I—Mr. Gold’s stripped-down, eccentric King Lear of three years ago, starring the then 82-year-old Glenda Jackson, you’ll likely react similarly to his Macbeth, which follows the same pathway to perdition. Even if you’re thinking, “If it were done when ’tis done, then ’twere well It were done quickly,” you’ll be disappointed, since it runs two and a half restless hours. (Worse, the eight o’clock show I attended experienced a delay in opening the doors; when I arrived at 7:45, the line extended two full blocks. This forced the curtain back to 8:22 p.m., with the end coming around 10:50 p.m.)

As the audience takes its seats, the witches are seen milling around a table bearing the ingredients for one of their magical concoctions (from which the entire cast later gets to sip), suggesting they’re more likely in someone’s kitchen than on a blasted heath. Behind them looms set designer Christine Jones’s simulation of yet another of those supposedly bare stages, brick upstage wall and all, which have become a boring scenic cliché.

Then, instead of “When shall we three meet again,” an actor (Michael Patrick Thornton, who plays Lennox) in a wheelchair rolls on to deliver a tongue-in-cheek account of the meaning of witchcraft in Shakespeare’s day; he actually asks us to say the play’s famously taboo title three times, something most were reluctant to do. This japery adds several unnecessary minutes to the already lengthy production, of course, but it’s only the beginning of the numerous annoyances that this way come in Gold’s gimmick-burdened mounting.

Dramaturgs Michael Sexton and Ayanna Thompson offer a program note to prepare us for the experience:

This production, like the theater of Shakespeare’s time, is one of minimal scenery and maximum fluidity and speed. There are no major scene changes, and the actors play multiple roles. This simplicity and flexibility, in which the play’s language carries most of the narrative and expressive weight, enables a high level of imaginative participation. As is true of many of Shakespeare’s plays, this form also nicely suits the portrayal of a world in which people’s motives, loyalties and true selves are shifting, unstable and unclear.

All well and good, but it doesn’t explain why so many actors—costumed by Suttirat Larlarb in a uninteresting mishmash of modern clothes—are indistinguishable from role to role; Maria Dizzia, for instance, looks pretty much the same as a Witch, Lady Macduff, and the Doctor. Or why it’s occasionally necessary to insert modern dialogue in a character’s mouth just for the sake of a laugh. Or why actors must rush about so often with hand-held smoke machines creating foggy arabesques around the action. Or why a dramatic moment is followed by Macbeth exiting into the wings to grab a cold can of beer, reenter, pop it open, and guzzle its contents. Or why he must shine a blinding green light in our eyes when Birnam Wood is on the move. Or why the final duel is now a mixed-martial arts combat—staged by David Leong—with Macduff (Che Ayande, in for Grantham Coleman at the performance I viewed). Or why it all ends with the entire cast sitting on the floor, backs against the upstage wall, now situated downstage, eating stew as someone sings a folk song. It’s not “Kumbaya,”but it might as well be.

Some of the more grotesque situations seem extraneous, like the early scene in which a dead soldier is strung up by his feet so that he hangs upside down, allowing his throat to be cut for blood to mingle in a witches’ potion. Other dire moments encourage laughter when they should inspire frissons. For example, King Duncan (Paul Lazar), played as a fat-suited doofus, lies sleeping on his back, his belly protruding, when Macbeth shoves his dagger into it, causing blood to spurt. Then, the actor rolls off the table, removes his gory fat-suit (just like Mrs. Doubtfire two blocks away), and walks downstage in his boxers to play the Porter in front of the formal curtain. That appurtenance has descended, perhaps, to remind us, redundantly, that we’re in a theatre. And should the audience actually chuckle during the banquet scene, where Banquo’s ghost appears? Or how about Lady Macbeth’s addressing “Out, damn spot” to a dirty floor she tries to scrub?

The cast, as is now de rigueur in classics (and many new plays), is racially and gender-diverse. Banquo, played by the talented Amber Gray (Hadestown), is no longer a male warrior, but a woman. This, she says in a Playbill article, was a decision made to give a new twist to the witches’ prophecy, “Thou shalt get kings, though thou be none.” Not an overwhelming insight, you must admit. I’m not sure what gender Malcolm is supposed to be now, but he’s played by Asia Kate Dillon, the non-binary actor so icily distinctive as Taylor Mason on TV’s “Billions”; they are wasted here in a thankless role.

Mr. Craig and Ms. Negga both offer clearly articulated but superficial performances. They make a striking couple, the graying Mr. Craig as impressively fit as 007, the doe-eyed Ms. Negga, her hair fashionably permed, beautifully sylph-like. Nevertheless, under Mr. Gold’s self-conscious helming, their work is dull, neither getting very deep under the skin of their characters’ ambitions and agonies, nor developing a particularly engaging relationship. The same can be said, in fact, for the entire cast, whose performances, even when externally passionate, are full of sound and fury, signifying nothing.

I’ve seen numerous Macbeths across the years, but that didn’t prevent me from having trouble deciphering certain moments in this staging. I can’t imagine what someone who’s never seen or read the play could possibly get here, except an excuse to catch up on their sleep. Shakespearean storytelling not being Mr. Gold’s best suit, it’s hard to figure out precisely what he hoped to illuminate about Macbeth with his precious tinkering.

Gold has been something of a Broadway golden boy in recent years, with several quality productions to his name. However, when it comes to Shakespeare, one must concede that all that glisters is not Gold.