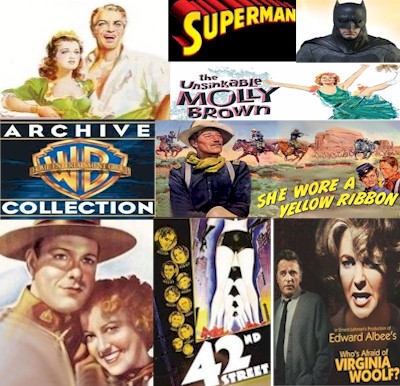 Library Journal estimates there are 2,000-plus M-O-D [Manufactured-on-Demand] titles available – many never released on Blu-ray, a number not previously released on disc. There are new titles released weekly. There’s original package art, but don’t expect booklets or bonus material. There can be trailers and cartoons. Widescreen movies are shown in their proper aspect ratio and formatted for 16X9 TV screens. Closed-captions and subtitles are rare except on films recently released.

Some resurfacing titles have been “lost” forever, so the world of M-O-D can be a virtual film buffet. Initially, the offerings were outdated “off-the-shelf” items.  Prices for these DVD-R discs burned to order are reasonable. More often than not you can hit upon a sale. The studio site archives usually have enough information so you know what you’re buying. Items often ship within three days.

Since Warner Bros. pioneered M-O-D seven years ago, more or less to do something with the huge hunk of M-G-M library they purchased when M-G-M, as those of a certain age remember it, ceased to exist, their www.wbshop.com can claim the old boast of having more stars there are in the heavens The Archive has grown from a few “deep catalog” titles that Home Entertainment didn’t deem economically sound for mass distribution to more than 1,500 titles. However, WB, famed for their dedication to film restoration, began remastering M-O-D titles for the DVD and Blue-ray HD age.

To visit the online catalog, visit the Warner Archive Collection at www.wbshop.com. The site address says “shop,” and there’s plenty of film-related memorabilia (Batman, Harry Potter, The Hobbit, Lord of the Rings, Superman, even the upcoming Suicide Squad). For M-O-D selections, click on Warner Archive.

The Collection covers a vast array of tastes. There’re lots of titles you may wonder “Why” about, but for every one of those there are Batman, Superman, film noir galore [such as The Big Sleep and Out of the Past], and vintage Astaire and Rogers musicals and other gems [such as 42nd Street, Kismet, Cole Porter’s Silk Stockings, and the newly-available The Unsinkable Molly Brown (starring Oscar and Golden Globe nominee Debbie Reynolds in a rousing performance).

There’s no shortage of megastars — Bogie and Bacall, Cagney, Davis, Hepburn, Grant , Taylor, and extraordinarily popular M-G-M singing lovers who really disliked each other, Jeanette MacDonald and Nelson Eddy in a two volume/ eight film collection [which includes Rose Marie and Naughty Marietta); or top directors – and Hitchcock thrillers [Suspicion, Rebecca, Strangers on a Train, and The Wrong Man], and John Ford’s post Pearl Harbor saga They Were Expendable (starring John Wayne and Robert Montgomery — in a 1080 p HD transfer).

There’s a helpful Search option, with many of the M-O-D selections available in Blu-ray. After a thorough search, here are unique options:

Cinema Exiles: From Hitler to Hollywood (Turner/PBS; 2009; 90 minutes) – From 1933 and 1939, over 800 Jewish members of the German film industry fled the Nazis and for the U.S. and Hollywood. Soon they had a massive impact on American cinema in comedy, drama, horror, and, especially, film noir. Narrated by Sigourney Weaver and told through film clips, interviews, photographs, and rare archival footage including home movies, Cinema’s Exiles explores directors Fritz Lang, Ernst Lubitsch, Billy Wilder, and Fred Zinnemann, actors such as Garbo and Peter Lorre, and composers Miklos Rozsa, Max Steiner, Dimitri Tiomkin, and Franz Waxman. Once in Hollywood, these raised money so others could escape. The German expressionists gave rise film noir. There’re clips from such enduring cinema as The Big Heat, Bride of Frankenstein, High Noon, Ninotchka, Sunset Boulevard, and The Wolf Man. Actors recreate some voices, but those heard as themselves are Dietrich, Deanna Durbin, Charles Laughton, Heddy Lamarr, Lorre, Lubitsch, Ann Sheridan, and Wilder.

Six by Sondheim (HBO; 2013; 86 minutes) – A quite candid look at Sondheim, as revealed through the performance of six of his songs, and by the man whose ground-breaking work redefined musical theater  – one that leads to a deeper understanding of him. “Everybody has problems,” he says. “Nobody goes through life unscathed. If you write about those things, you’re going to touch people.” Directed by James Lapine, the film weaves Sondheim interviews with those of Yvonne de Carlo, Dean Jones, Larry Kert, Ethel Merman, Mandy Patinkin, and Bernadette Peters. Darren Criss, America Ferrera, and Audra McDonald sing classic tunes, including “Being Alive,” “I’m Still Here,” “Opening Doors,” “Send in the Clowns,” and “Something’s Coming.”

To Have and Have Not(WB; 1943; 100 minutes) – Howard Hawks’ masterpiece, loosely adapted from Hemingway novel with an assist from Faulkner, remastered for its Blu-ray debut adds even more sizzle to Bogie and Bacall’s first pairing. Bacall, still in her teens, as lounge singer and French resistance sympathizer, sets off sirens with famed “whistle” line; but Bogie matches bravado scene after scene as she wraps him around her little finger. He segues from pickpocket in WWII Vichy France to smuggler to hero as he transports a fugitive on the run from Nazis. Walter Brennan, Hoagy Carmichael, and Dolores Moran co-star. The uncredited score is by legendary Franz Waxman 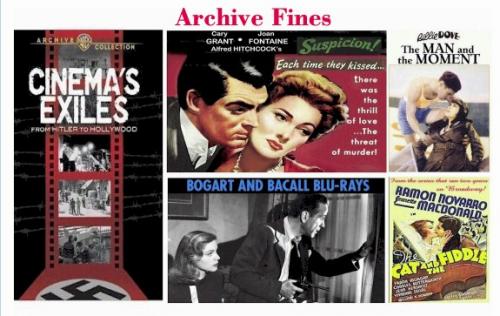 Who’s Afraid of Virginia Woolf (WB; 1966; 131 minutes) – Blu-ray debut of Albee’s bitter tale of aging couple on the rocks in more ways than one who use a young couple to fuel emotional pain against each other. Not for the faint of heart. Directed by Oscar-nominated Mike Nichols. Stars Oscar-winning Elizabeth Taylor in daring high drama, Richard Burton (giving as good as he gets), George Segal, and Oscar-winning Sandy Dennis in her shining hour. Film, Burton, Segal, and Nichols were Oscar-nominated; film, stars, Nichols, were Golden Globe-nominated.

The Green Slime (Japan, U.S., Italy; Toei Studios/M-G-M;1968; 90 minutes)– original widescreen format; digitally remastered – Even judged against low standards, it doesn’t get any cheesier than this – but it’s so bad, it’s good. Directed by Kinji Fukasaku, who inspired Quentin Tarantino and Robert Rodriguez’s schlockiness, it’s a campy Sci-Fi story of astronauts disembarking from space station to nip a giant asteroid in the bud. They return with gooey green mess that has mind of its own. Robert Horton and Richard Jaeckel headline.

The Archive is a treasure trove of long-forgotten and some long-thought lost silents, films caught in the transition from silent to sound, and early talkies:

The Merry Widow(M-G-M;1934; 89 minutes) –  Newly remastered –  Lehar operetta gets Ernst Lubitsch’s sophisticated, frothy touch in this story of  a kingdom in jeopardy of losing its biggest tax payer, who resettles in Parisian splendor to marry. Count Danilo has other plans for her. Jeannette MacDonald and Maurice Chevalier had a blast making this in the pre-Hays Code days before filmmakers were stymied. Samson Raphaelson (The Jazz Singer, The Shop Around the Corner [source forBock/Harnick She Loves Me], andSuspicion) and Ernest Vajda (Chocolate Soldier, Marie Antoinette; later a Broadway playwright) loaded script with earthy entendre. Edward Everett Horton and Una Merkel romp it up as the king and queen. There are other Merry Widows worth mentioning and available at Warner Archive: Erich von Stroheim’s 1925 silent take, starring Mae Murray and dashing silent idol John Gilbert; and the studio’s lavish 1952 Technicolor opus starring Lana Turner – yes, that’s right – and Fernando Lamas.

The Man and the Moment (WB; 1929; 75 minutes) – Thought long lost. Silent giants Rod La Rocque and Billie Dove star in this risqué comedy – a beautifully restored example of how silents made the transition to sound by synching dialogue, music, and sound effects to the Vitaphone discs [pre-sound on film]. Thin plot has millionaire pursued by goldigger put her off by marriage of convenience. Yes, of course love blooms. Gwen Lee costars.

The Archive has a virtual feast of films of late silent film idol Ramon Novarro, rival to Valentino and Fairbanks. The silents, especially Ben-Hur (1925), were his heyday, but he made an easy transition into sound. Did you know he could sing? His name was so big that he continued working into his late 60s and brutal murder in 1968. Watching these films, it’s amazing he, like Valentino, was considered the virile male who made women – and some men – swoon. However, to say the least, Novarro had gusto in spades.

Devil-May Care (1929; 97 minutes) – His all-talking debut, a romantic musical (M-G-M’s earliest) Napoleonic adventure about how solder eludes the firing squad and find his heart captured by a lovely Royalist who double crosses him right into the arms of her cousin. Dorothy Jordan and Marion Harris are the dames. Film featuring a two-color Technicolor ballet sequence scored by future Oscar-winning composer Dimitri Tiomkin.

Other worthy Novarro escapades: In Gay Madrid(1930; 82 minutes) – Singing again (tunes by Xavier Cugat), the idol charms his way into women’s hearts as Spanish playboy; Son of India (1931; 73 minutes) – An accused diamond thief is exonerated by an American to whom he pledges eternal debt, then segueing 10 years later, with his one of India’s wealthiest men, he proposes to the man’s sister, but the family cannot accept him; Laughing Boy (1934; 79 minutes) – comic romp with Novarro as a singing Navajo who romances Mexican spitfire Lupe Velez in film loosely based on the novel by Pulitzer Prize winner Oliver La Farge; and, among many others, The Cat and the Fiddle, (1934; 88 minutes) – has Novarro paired with Jeanette MacDonald as struggling composers and live-in companions singing tunes from the Kern-Harbaugh musical comedy – including “The Night Was Made for Love.”