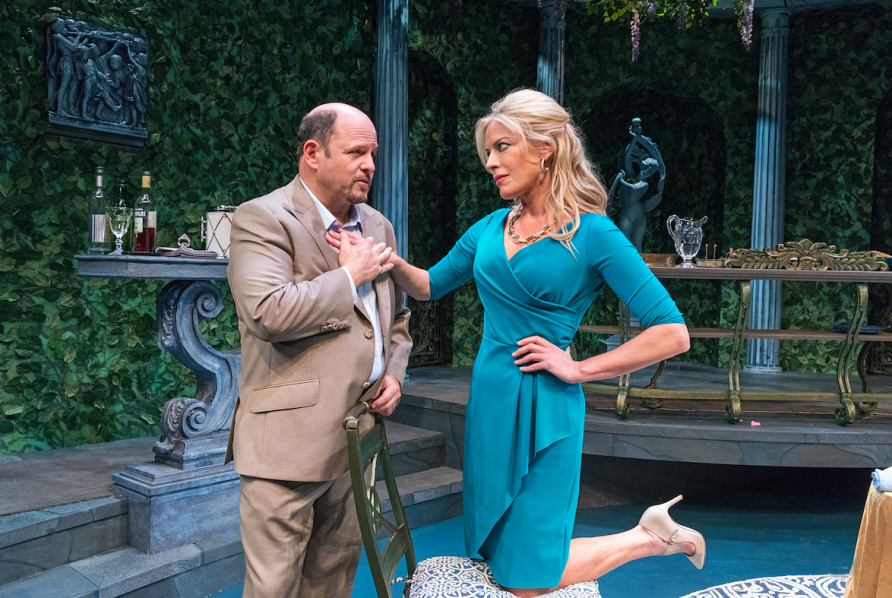 Butterfly chronicles the truth-based case of French diplomat Rene Gallimard, imprisoned for espionage committed with his Chinese mistress whom he did not know was really a man. John Dexter’s Kabuki-and-Noh-influenced original 1988 Broadway production was a smash hit, running 777 performances, a rare feat for a nonmusical show. The news that Julie Taymor, one of the most imaginative directors of the modern theater, would be working her magic on a new version, was a thrilling prospect. The result is occasionally striking but ultimately disappointing from the director of The Lion King and a dazzling Midsummer Night’s Dream. As she did with her Spider-Man: Turn Off the Dark disaster, Taymor focuses on visuals and neglects the human connections.

The opening is gripping. Clive Owen as Gallimard is crouching in a prison cell made of two panels with a single light bulb dangling over head. (Donald Holder’s stark lighting creates an appropriately bleak picture.) The same basic image is repeated with Owen in various poses of despair. Finally, a tiny white butterfly puppet symbolizing his vanished love flutters just out of his reach. This vividly conveys the basic story in economic and poetic terms. But the subsequent staging consist mostly of actors running on and off, rearranging set designer Paul Steinberg’s bland screens. There is brief excitement during the Chinese opera segments (Ma Chong provided the intricate choreography) and when Owen’s Gallimard demands Jin Ha as Song Liling strip for him. Owen strikes out at the highly artificial set pieces, screaming he is tired of exaggerated theatricality (I felt the same way by this time late in the first act.) Too bad there is little spark between Owen who is miscast as the fumbling diplomat, and Ha who is intriguingly feminine in his gender-bending role. The ruggedly handsome Owen is just not right for the inept, self-conscious Gallimard. The character is supposed to be hopeless with women until he meets the idealized Song who is not even a “real” female. In the original, John Lithgow exquisitely conveyed the Frenchman’s foolish fascination with an illusion while Owen doesn’t fully commit to Gallimard’s obsession. He doesn’t even don a wig in the final moment of ironically transforming into a geisha.

Further muddying the waters, Hwang has updated his script with graphic descriptions of Song’s sexual deception and details about his/her gender identity based on revelations about the real figures involved. With today’s higher awareness of transgender issues, you would think these alterations would make the play more relevant, but they only serve to make it confusing. The first version was infused with mystery and sexual longing but both playwright and director have clipped the play’s wings, leaving us with an earthbound Butterfly.

John Patrick Shanley’s The Portuguese Kid doesn’t soar either, but the playwright’s trademark wit and a crackerjack cast at least get it off the ground. Jason Alexander provides a variation on his schlubby George Constanza character from Seinfeld with Barry Dragonetti, a scrambling Rhode Island lawyer caught in a love-hate tug-of-war with Sherie Rene Scott’s ferocious Atalanta Lagana, a man-eating two-time widow. As he did in his Oscar-winning screenplay for Moonstruck and such plays as Danny and the Deep Blue Sea and Italian-American Reconciliation, Shanley charts the explosive elemental conflict between man and woman. (The strange title refers to a teenage hood who attempted to rob a panicked Barry. Atalanta thwarted the crook and Barry has never been able to forgive her for emasculating him.)

There are uproarious laughs and sharp characterizations, briskly directed by Shanley, but the predictable plot runs out of steam before the 90 minute running time. A bit too neatly, Barry and Atalanta have taken up with much younger partners who have been previously involved with each other. I’ll give you three guesses as to who ends up with who. Despite the familiarity of the premise, Kid is an enjoyable, if forgettable comedy. Alexander and Scott clash with relish and Aimee Carrero and Pico Alexander provide spunk and spark are their new flames. But the show is nearly stolen by Mary Testa as Barry’s harridan of a mother. This Broadway veteran is a force of maternal nature, dominating the action in her few scenes.

More successful than either of these mismatched love fights is Anna Ziegler’s The Last Match which portrays a different kind of rivalry, but one that is just as binding. Two tennis champs—Tim, an American legend considering retirement and Sergei, a Russian-born hot shot on the raise—face off in the climactic final of the US Open. Theatrically depicting the thrill of athleticism can be difficult. Lucas Hnath scored with the fascinating Red Speedo which featured a real swimming pool onstage. However, Eric Simonson’s odes to baseball (Bronx Bombers), basketball (Magic/Bird), and football (Lombardi) failed to rack up many winning points, but not conveying the intense physical exuberance of their respective games. Ziegler employs an expected choice of depicting the protagonists’ highly-touted courtside encounter onstage (Tim Mackabee created the effective stadium set) and intercutting it with flashbacks featuring the players’ love interests. Ziegler’s incisive, spare dialogue and Gaye Taylor Unchurch’s inventive staging manage to give a sense of the ecstatic blood-rush of competition and how it drives these two men.

Wilson Bethel captures Tim’s charismatic confidence without being arrogant and Alex Mickiewicz’s takes full advantage of the juicier challenge of combining Sergei’s Slavic temper with his devastating insecurity. Zoe Winters manages to give a shine to Mallory, Tim’s wife, who could have fallen into a melancholy trap since she is called upon to fall apart often. Natalia Payne is zesty, nasty, and delightfully resilient as Galina, Sergei’s brutally pragmatic girlfriend. Mackabee’s set includes two gigantic scoreboards on either side of the stage and we follow the points just as eagerly as if we were at the real match. For these three productions, love in tennis beats love off the courts.