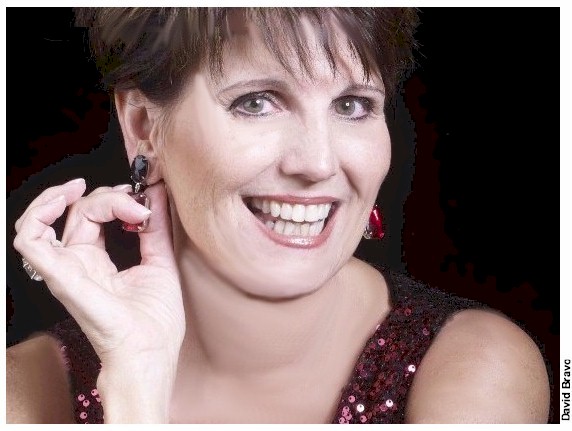 Lucie calls the show “a celebration of my life onstage” as she explores her theater roots, “looking back at some of the roles I’ve created on stages throughout the world.”

The concert offers a behind-the-scenes look at the backstage magic in her amazingly diversified five-decade career with “anecdotes and cherished memories about my personal journey, co-stars, directors, and musical collaborators.” Along the way, she says, she’ll perform treasures from some of Broadway’s greatest shows and what it took to create them.”

Lucie became a beloved household name when she co-starred opposite her mother, legendary comedy icon Lucille Ball, in recurring roles on The Lucy Show, beginning in 1962 at the ripple old age of 11, and six seasons of Here’s Lucy (1968-1974). She also co-starred in the 1991 CBS series Sons & Daughters. One of her most cherished film roles was appearing opposite Neil Diamond and Sir Laurence Olivier in 1980 remake of The Jazz Singer, which in 1927 ushered in movies’ sound era.

Though a popular TV staple, also with her 1985 half-hour series The Lucie Arnaz Show where she portrayed psychologist/advice columnist Dr. Jane Lucas, who takes calls on her radio show, she had a burning love for live theater. She had her first theatrical experience at 14 as the Cheshire Cat in Alice in Wonderland. Lucie’s last Broadway appearance was in the 2013 Pippin revival, when she joined the cast in 2014 as “Grandma” Berthe, hanging high above the stage doing a trapeze routine.”

Other Broadway appearances include They’re Playing Our Song, Lost in Yonkers, and Dirty Rotten Scoundrels. She co-starred in the first national tours of Seesaw, Whose Life Is It Anyway?, Social Security, My One And Only, and Pippin. She appeared regionally in Vanities and Master Class as well as numerous stock productions. She appeared on the West End in The Witches of Eastwick. For the West Coast production of They’re Playing Our Song, Lucie won the Los Angeles Drama Critic’s Award.

Lucie teaches song performance master classes, and has dipped her hand into directing. Along with brother Desi, she manages Desilu, Too LLC.

On the 1981 Oscars, Lucie opened the show headlining a chorus of 22 hoofers in a song and dance “Hurray for Hollywood” tribute.  She’s also performed at the White House; and, in a twist of fate, just happened to be visiting the White House when President Obama opened the door for relations with Cuba, the homeland of her father, legendary TV producer as well as comedy icon Desi.

During her 37 years as a New York resident, Lucie was a trustee of the American Theatre Wing, co-presenter of the annual Tony Awards, for 15 years beginning in 1999.  As a resident of Palm Springs, she’s lent her name to the annual Lucie Arnaz Awards, which “support, sustain, grow, and inspire quality performing arts experiences” for Riverside and San Bernardino high schoolers.

Lucie and husband actor Larry Luckinbill “manage five children between us (our three and his two).”

Tickets for Lucie Arnaz, I Got the Job! Songs from My Musical Past, are $40 and available at the Tickets link at www.birdlandjazz.com. For more information on Lucie Arnaz, visit www.luciearnaz.com.