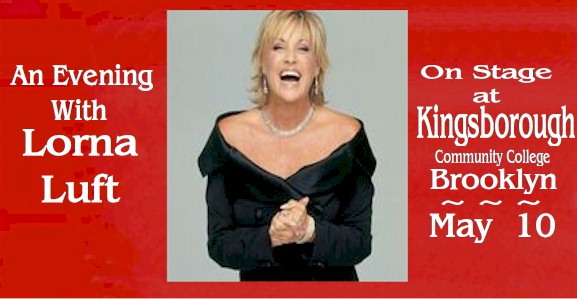 Critics have labeled Lorna Luft one of our “most vibrant, versatile, and exciting artists.” Her show business genes have taken her to virtually every arena of entertainment: the world’s most prestigious stages, including Broadway, the West End, Carnegie Hall, the Hollywood Bowl, London Palladium, Paris’ L’Olympia; TV; film, and top cabarets and supper clubs.

The daughter of Garland and husband Sid Luft and half-sister of Liza Minnelli calls her new show “a concert of poignant songs from my heritage. It’s been a dynamic and emotional journey. Music and entertainment have always been integral parts of my life. I proudly carry the torch in honor of mama. She always kidded me about preferring the loud songs. She knew this gal was a belter.”

Endless books have been written about her mother, but, states Luft, “Not one of the authors ever came to our home, they didn’t know mama.” She observes that from childhood into her late teens “there were unknowns, challenges, and lots of travel – not always because I wanted to. There were 17 schools in 17 cities. I got very good in geography, but couldn’t spell geography. But wherever we settled, mama was not only a wonderful mother, but also a wonderful human being. She loved to laugh. I can still hear that great laugh. She was witty, kind, and smart. No surprise there! Look who she worked with and how she was able to hold her own. She was the whole package.

“We were always singing,” she adds. “You never knew who’d pop by [maybe her godfather, Frank Sinatra, “a devoted, life-long friend of mama’s”]. At parties, there was no stopping mama. No one ever had to beg her to sing. She loved doing it. Since childhood, she’d been programmed to perform at the drop of a hat. She was this little thing, but absolutely amazing, a dynamo. Sometimes, I’d step back and think ‘Where’s that voice coming from?’”

Losing her mother at 16 was a devastating blow, “but I remember her every time I enter a store and see her as Dorothy on a greeting card, hear her songs on the radio, hear the recordings, and see her movies.”

Friends urged her to sing her mother’s songs, “but I ran. I was desperate to take my own footsteps. At that stage in my life, I didn’t have the strength and ability to give those tunes what they deserved. It was scary. I had to be strong and emotionally ready, and I wasn’t. Fortunately, when I got into my 40s, I could say ‘I can do this. Everyone and their brother have recorded the songs. Why not me?’ Now, I can look at the photographs, the movies, listen to the albums, and not be sad. I began to fully understand this woman who was my mother and my relationship with her. It was a process I had to go through. I can’t escape my legacy. Mama will always be with me. She’s on my shoulder every single day, watching over me.”

Luft segued from belting around the house to making her TV debut at age 11 on her mother’s series, The Judy Garland Show. Her solo debut was in Atlantic City at the famed Steel Pier, sharing billing with Wanda, the Diving Horse. In 1967, with her brother Joey, she shared the bill with her mother on Broadway in a fabled month-long engagement, Judy Garland: “At Home at the Palace” (Theatre). In December, 1968, she took over the role of Fran Kubelik in the Tony-nominated Burt Bacharach/Hal David/Neil Simon musical Promises, Promises. She starred in the national tour of They’re Playing Our Song. In December 1982, she appeared Off Broadway as Peppermint Patty in Snoopy; and the following year starred opposite Farrah Fawcett, when she replaced Ellen Barkin, in the searing and controversial drama Extremities. She’s been a perennial in stock and regionals.

In the U.K., she appeared in Manchester  in a stage adaptation of The Wizard Of Oz, portraying the Wicked Witch of the West. She toured in the revues The Magical World of Musicals and Songs My Mother Taught Me, which she’s taken throughout the U.S. and world.

On film, Luft had roles in Grease 2 andthe 1984 Where the Boys Are. She’s is no stranger to TV, where she’s guested and had recurring roles on countless programs including opposite long-time family friend Angela Lansbury on Murder, She Wrote.

What many don’t know or have forgotten is that Luft is a New York Times best-selling author: Me and My Shadows: A Family Memoir. She’s also a co-producer of the Emmy- and Golden Globe-nominated TV adaptation, starring Judy Davis as Judy Garland.In the beautifully-realized 2018 A Star Is Born: Judy Garland and the Film that Got Away (Running Press), she and co-author Jeffrey Vance follow the path of A Star is Born. They begin with the 1932 What Price Hollywood that led to the 1937 early Technicolor classic A Star Is Born, starring Janet Gaynor and Frederick March;to behind-the-scenes of the making of the 1954 musical, co-starring James Mason and directed by George Cukor with a screenplay adapted from the 1937 picture by Broadway’s Moss Hart (My Fair Lady); and to the 1976 rock remake starring Streisand and Kris Kristofferson and the tensions and discord between Streisand and director Frank Pierson and the resulting media firestorm.

As Luft vividly recounts, the 1954 film was not without problems during shooting, but what’s considered “close to a masterpiece” resulted. Garland and Mason captured Oscar and Golden Globe nominations. Along with dozens of color and B&W photos, there are two standout sequences in the book. One, Garland, hospitalized, awaiting the eminent birth of her son, is watching the Oscar telecast with her room packed with TV technicians waiting for her to be announced Best Actress [the Vegas odds were on her] and then, when Grace Kelly’s name was called, how she was suddenly and unceremoniously deserted with only Lauren Bacall by her side.

The other is the saga of how WB co-studio head Harry Warner in New York bowed to theatre exhibitors demand that the film be notoriously slashed from just over three hours to just over two-and-a-half. The result destroyed early continuity through the first and second acts. The effort to score more screenings per day backfired and, after the initial rollout with gala premieres in Hollywood and New York, box office dropped. The film was one of Garland’s greatest achievements, and one of her greatest disappointments. The search for the missing footage for a 1983 restoration had all the ingredients of a detective story.

Also, poignant in the book is Luft’s tell-it-like-it-was take on Garland’s tumultuous life – the triumphs, decline, comebacks, and her death.

Luft is celebrating the 23rd anniversary of her marriage toFreeman, whom she met in 1992 in the U.K. when they toured in the revue, Hollywood & Broadway. Luft says of him, “He’s the half that makes me whole.” Luft has two adult children from a previous marriage, Jesse, who’s a stockbroker, and Vanessa, a chef.

If you haven’t already realized that the indefatigability of Judy Garland rubbed off on Luft, stay tuned.

In 2012, she was diagnosed with had breast cancer. “I was in total denial,” she admits, “but my close friend Barry Manilow connected me with a specialist and, after reviewing tests and the results of a biopsy, I was given good news.” She opted for a lumpectomy, chemotherapy, and radiation. She resumed her career, but in 2015 the cancer reemerged. Surgery followed. Then, last year, Luft collapsed following a performance in London. A brain tumor was discovered. Surgery was successful.

If anyone can sing Sondheim’s song for Carlotta in Follies, “I’m Still Here,” it’s certainly Lorna Luft. She’s still here, ready and raring to go and anxious to spend an evening of song and storytelling with you.

An Evening with Lora Luft is being presented in association with the Courier News Group, Gay City News, and the Brooklyn Daily Eagle. Remaining tickets are $34 and $39 and available at the On Stage box office (10 A.M. – 5 P.M., through – Friday), by phone at (718) 368-5596, and online at www.OnStageAtKingsborough.org. For seat locations, and directions by car and metro, visit the website.