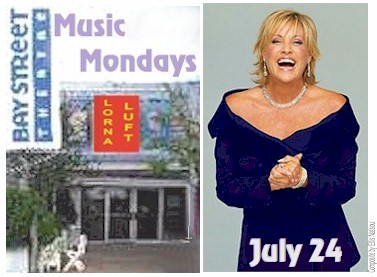 The one-night-only concert is being presented for the theatre’s cabaret series in association with the Sag Harbor Center for the Arts.

Lorna Luft’s career has encompassed virtually every arena of entertainment. She’s a celebrated concert, stage, film, and TV, bestselling author, recording artist, Emmy-nominated producer, and humanitarian. It’s been said that she “triumphs in every medium with critics labeling her one of the most versatile and exciting artists on stage today.”

For those in the know, that isn’t a surprise: Lorna is the daughter of show business icon Judy Garland, with husband/producer Sid Luft. She possesses “stellar entertainment genes.”

Her show business legacy has been featured on the world’s most prestigious stages, including Broadway, the West End, Carnegie Hall, London Palladium, Paris L’Olympia, and she’s headlined top cabarets. She is, of course, the step-sister of the equally legendary Liza Minnelli.

“Music and entertainment have always been integral parts of my life,” Luft explains. “I proudly carry the torch in honor of Mama. She always kidded me about preferring the loud songs. She knew this gal was a belter.”

At age 11, displaying gutsy props, she made her professional debut on TV’s The Judy Garland Show dueting with the one-and-only JG. Her solo debut was in Atlantic City on a newer iteration of the famed Steel Pier, sharing billing with Wanda, the Diving Horse.

Luft can never be accused of sitting back on her laurels. At 16, she shared the bill with JG on Broadway in a fabled month-long engagement at the Palace. Three years later, she took over the role of Fran Kubelik in 1971’s Bacharach, David, and Simon’s Tony-nominated Promises, Promises. She starred in the 1981 national tour of Hamlisch, Sager, and Simon’s They’re Playing Our Song, the 1992 tour of Loesser, Swerling, and Burrows’ Guys and Dolls, and U.S. and U.K. tours of Irving Berlin’s White Christmas [including New Jersey’s Papermill Playhouse].

In 1982, she appeared Off Broadway as Peppermint Patty in Hackady and Grossman’s Snoopy; and starred opposite Farrah Fawcett when she replaced Ellen Barkin in William Mastrosimone’s searing drama Extremities. She’s been a perennial in stock and regionals.

On film, Luft had roles in Grease 2 and the 1984 Where the Boys Are. She’s is no stranger to TV, where she’s guested on countless programs and had the recurring role of Patti Bristol on Murder, She Wrote; co-starred as nurse Libby Kegler on the Trapper John, M.D. series; and, more recently, provided the voice for Joanne on the series Rick & Steve, the Happiest Gay Couple in All the World. Her 1998 best-selling family memoir Me and My Shadows became an acclaimed Emmy-winning miniseries.

She and husband [over 20 years]/music director Colin Freeman have taken Luft’s autobiographical Songs My Mother Taught Me around the country and world [Australia, China, Ireland, and the U.K.]. They met in 1992, in the U.K. when she was appearing in the revue, Hollywood & Broadway. Luft says of him, “He’s the half that makes me whole.” [Luft has two adult children from a previous marriage, Jesse, who’s a stockbroker, and Vanessa, a chef.]

Luft observes that in the early years there were unknowns, challenges, and lots of travel – “not always because I wanted to. There were 17 schools in 17 cities. I got very good in geography, but couldn’t spell geography.”

But wherever the family settled, Luft adamantly affirms that Judy Garland was not only a wonderful mother “but also a wonderful human being. Mama loved to laugh and she had a great laugh I can still hear. She was witty, kind, and smart. I mean, look who she worked with as a youngster and how she was able to hold her own. She was the whole package. A lot of that had to rub off!”

Luft vivid memories of the show business Who’s Who passing through their homes [her godfather was none other than Ol’ Blue Eyes, a devoted life-long friend of JG’s]. “We were always singing,” says Luft. “You never knew who’d pop by. At parties, there was no stopping Mama. No one ever had to beg her to sing. She loved doing it. Since childhood, she’d been programmed to perform at the drop of a hat. She was amazing, and she was this little thing. Sometimes, I’d step back and think ‘Where’s that voice coming from?’”

Losing her mother at 16 was a devastating blow. “But Mama’s never gone away,” she explains, “and she’ll always be with me. I remember her every time I enter a store and see her as Dorothy on a greeting card, hear her songs on the radio, see her movies on TV.”

Luft is blunt about teen years and segueing into adulthood. “I was living here, and there was Studio 54, where I became a regular. I dyed my hair purple, sang with Debbie Harry, and played a little too much with the players.”

Friends urged her to sing her mother’s songs, “but I ran. I was desperate to take my own footsteps. At that stage in my life, I didn’t have the strength and ability to give mama’s songs what they deserved. It was scary. I had to be strong and emotionally ready, and I wasn’t.

“Fortunately,” she states, “when I got into my 40s, I could say ‘I can do this. Everyone and their brother have recorded the songs. Why not me?’ Now, I can look at the photographs, the movies, listen to the albums, and not be sad. I began to fully understand this woman who was my mother and my relationship with her. It was a process I had to go through. I can’t escape my legacy. Mama’s on my shoulder every single day, watching over me.”

Lorna Luft: The Songs My Mother Taught Me, co-produced by Barry Manilow and Freeman, is available from First Night Records.

Bay Street Theater and Sag Harbor Center for the Arts is a year-round, not-for-profit professional theatre and community cultural center “which endeavors to innovate, educate, and entertain. It serves as a social and cultural gathering place, educational resource, and a home for artists.” Music Mondays is sponsored in part by Grenning Gallery.