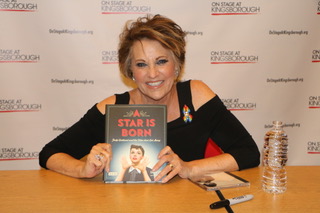 Since then, she has had dozens of starring and guest-starring roles on film and television, ranging from Grease 2 and Where the Boys Are ’84 to the series “Murder She Wrote” and “Sean Saves the World.” Lorna was co-executive producer of Life with Judy Garland, the 5 time Emmy award-winning miniseries based on her best-selling memoir, Me and My Shadows.

For the past several years, Lorna has been starring in American and British productions of Irving Berlin’s White Christmas. Last Friday night Lorna brought her show to On Stage at Kingsborough and shared  her unique perspective born from a lifetime in entertainment, Lorna Luft sang favorites from the Great American Songbook that were associated with family members(mother Judy Garland and sister Liza Minnelli)  and family friends. In between songs Lorna told wonderful stories of the great composes that she and her family called friends.

Lorna talked about her latest book “ A Star is Born”. It’s  the back story of making of the iconic film. One of the stories Lorna recounted from the book was  the great disappointment  her parents experienced after the release of the film. After  two weeks   in the theaters   the studio pulled the film  and  recut it. The film was a collaboration of her parents and were  so proud of the result only to have their vision for the film ruined.

Having battle major health issues Lorna has not been impaired and  gave a strong performance. After the show she greeted her fans and signed books and thrilled them with allowing  selfies  to  be taken with anyone that asked.