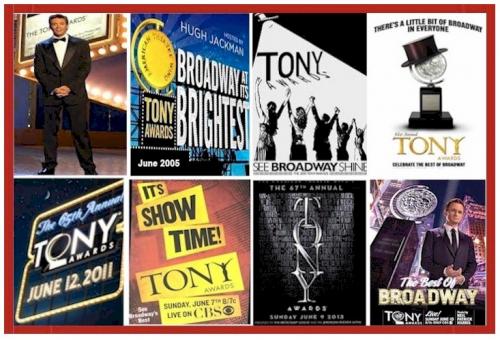 Looking back over the last 70 years, mainly through a lot of research since there were a couple of early decades I wasn’t able to cover, change has been vast – in the recent landmark productions such as Hamilton, and such shows as Bring in ‘da Noise, Bring in‘da Funk (1996), and Spring Awakening (2006) and this season’s first Broadway revival, Passing Strange (2008), and American Idiot (2010). Even off-beat work you’d only see Off Broadway has made it to the main stem, such as last season’s Hedwig and the Angry Inch.

“You’ve come a long way, baby” might be the anthem for the 2015-2016, to borrow a slogan of a product hyped to women beginning in 1968. Now, women have long played a vital role in theater/Broadway, and not just in, say, costume design. Before Tony Awards namesake Antoinette Perry became an immensely successful producer/director beginning in the late 20s, there were the pioneering producer/director Margaret Anglin and writers such as actress/playwright/director Rachel Crothers, and later, Edna Ferber, Zona Gale, Clare Booth, and Mary Chase.

Susan Stroman, Kathleen Marshall, and Diane Paulus have carried the torch forward. However, this season the glass ceiling was really broken with the creatives of Waitress. The show’s book is by Jessie Nelson, based on the film by Adrienne Shelly, and has a score by Sara Bareilles, with music supervision by Nadia DiGiallonardo, arrangements and orchestrations by Bareilles and DiGiallonardo, and choreography by Lorin Latarro.

In the era of lifestyle changes, which have certainly affected the way the population views TV, with all its adjuncts, the American Theatre Wing and Broadway League, co-presenters of the Tonys, have a loyal partner in CBS and  Leslie Moonves, its president and CEO. The network has carried the Tonys since 1978 in the face of ratings that have rarely been blockbuster .

“The Tony Awards, which are the embodiment of live theater in America,” says Moonves, “have a rich tradition on CBS. We’re delighted this spectacular show is on our network. The Tonys represent what we represent, the best quality entertainment. As long as I’m here, the Tonys will be here.”

It might have something to do with Moonves being a former actor and for 11 years a Broadway GM. He even produced. Once. Off Off-Broadway. “And though I’ve made my bones in television, the Tonys keeps me attached to something I love — the theater.”

The Tony creative teams have returned the favor by winning a plethora of Emmy Awards for excellence.

Memories, More than a Few 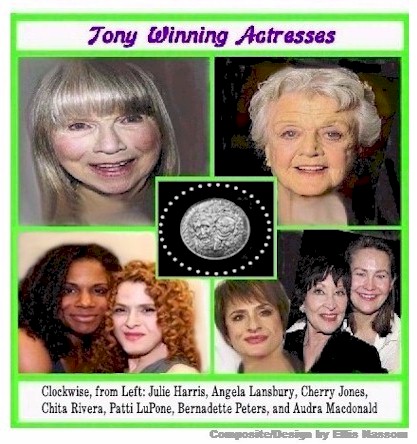 Holding the most nominations in the musical category are Hamilton (2016) with 16 nods; tying with The Book of Mormon. In second place are The Producers, (2001) and Billy Elliot (2009) with 15 each. The Producers is the most-winning show, triumphing in 12 categories including Best Musical; with Book of Mormon a close second with 11 wins, including Best Musical. The late, beloved Julie Harris racked up 11 nominations and six wins. Audra Macdonald and Angela Lansbury are tied in the win department with five each. Macdonald has eight nominations; Miss Lansbury, seven. Chita Rivera has 10 nominations and two wins.

The Prince of Broadway

Harold Prince has earned more Tony Awards than anyone else (21 awards), including eight for directing, eight for producing, two as producer of the year’s Best Musical, and three special Tonys. 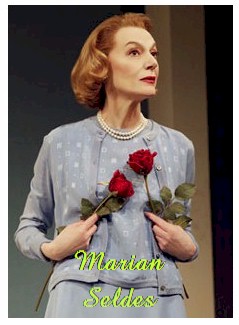 Marian Seldes, who passed in 2014, was Tony-nominated five times, winning in 1976 as Featured Actress in A Delicate Balance. “I experienced the same thrill each time, even when I didn’t win,” she stated in her famed stage whisper. “I never thought of losing as losing. It’s possibly a cliché, but it’s thrilling to be nominated, to get the recognition for your work when you’ve spent your life in the theater. To be nominated, to be singled out is meaningful. When I started out, I never thought about winning anything. What is wonderful when you are nominated is that it brings you together with people you love and admire and some you’ve never met – and some to whom you feel like a fan. Being included with such warmth and positive feeling is glorious. You remember it always.” She took a pause, sipped tea from a delicate China cup, then added, “Of course, winning is nice!”

She considered it “good fortune” to have played in the works of Tennessee Williams, Peter Shaffer, Edward Albee, Neil Simon and Terrence McNally. “And I could go on,” she quips. “

She’s performed with John Gielgud in Albee’s Tiny Alice, where she stood by for Irene Worth; also Crime and Punishment; and, at a mere 18 years of age, Medea. Then with Hume Cronyn and Jessica Tandy, in Albee’s A Delicate Balance; a young Audrey Hepburn in Ondine; Gladys Cooper, Siobhán McKenna, and Fritz Weaver in The Chalk Garden; Tallulah Bankhead and Ruth Ford, and Tab Hunter, the short-lived revival of Williams’ The Milk Train Doesn’t Stop Here Anymore ; and John Wood [and later John Cullum] and Frances Sternhagen, Deathtrap.

What kept her working all these years? “I don’t play anything as usual, as expected, in a stereotyped way. If you’re in a recurring TV role, you constantly replay the part, but if you do plays you don’t play the same part over and over. That’s the magic of life in the theater, certainly with the living playwrights I’ve worked with. They don’t repeat themselves.”

Of Tennessee Williams, she stated: “If he was a shy man – and, indeed, he was when we first met, he was so convivial. I admired his hearty laugh and not taking himself seriously. Tennessee was easy to be around, lovely to be around. You never felt his ego. What I found surprising for so brilliant a writer was how depreciating he was of his gifts. He did have a way with words, and he also created some of the very best female roles ever.”

From M-G-M Musicals and Back to Broadway

Movie musicals legend Ann Miller made her Broadway debut in the short-lived George White’s Scandals in 1939, then was off to Hollywood. She returned to the boards in 1969 to become the fourth to follow her long-time friend Tony-winning Angela Lansbury in Mame. “My Tony moment came in 1980, when I was nominated for Sugar Babies. That was the year of Evita, so I didn’t have high hopes; but, as they say in Hollywood, it was a thrill to be nominated! Especially for something I’ve loved doing all my life – tap dancing.”

She made a splash at the 2001 Tonys, in a skin-tight red gown slit “up to here” exposing her still-gorgeous right leg, when she came in tribute to the revival of 42nd Street. She dripped with diamonds. “I was awestruck seeing the cast tap down the aisles of the Music Hall and onto that great stage. I was so proud of Randy Skinner, who was nominated for choreography, and how far he’d come working with my old friend Gower Champion on all the tap routines [along with Karin Baker]. I’d admired his work for a long while. He was going to be one of my Sugar Babies boys, but that didn’t work out. But we did a tour of Anything Goes and had a blast. He was our dance captain and one of Reno’s boys. We never lost touch.”

Saved by a Dancer’s Discipline to Perform Again

Chita Rivera says her refusal to think negatively helped her through her worst crisis. In a 1986 automobile accident, her left leg was crushed. The prognosis wasn’t good, but Rivera was determined she’d dance again.

“When I saw the x-rays,” she states, “I realized I had work to do; but dancers don’t know anything else. Thank God for the discipline. Pity wasn’t a word in my vocabulary. I’ve never been one who does anything half-way.”

Amazingly, she was released three weeks later, albeit with 18 screws in her leg. “From day one,” Rivera notes, “I did exactly what I was told. I could feel my leg mending.” Eleven months later, she had enough mobility to make her realize she could still have a career. “I wasn’t happy with my dancing, but I was on my feet!”

She did a couple of “shakedown” engagements before signing on for the 1988 tour of Can Can. “How crazy was that?” she screamed. “Of all shows! But I didn’t miss a kick!” Rivera says she’s happy the accident didn’t happen when she was younger, as she may not have been as strong. “Every day, I pinch myself for my blessings. I’m the luckiest woman in the world!”

On her daily TV show, Rosie O’Donnell fiercely promoted Broadway. It was a natural for her to be selected as host of 1997 Tonys. To say the road to the telecast was rocky between she and executive producer Gary Smith is to err on the polite. Says Smith, “We came to fisticuffs. The problem was that I was in charge, and she wanted to be. She knew more than I knew. We never patched things up. I tried.” The next year, he was out. Co-producer Walter Miller became executive producer, with O’Donnell as producer. During the commercial breaks, O’Donnell was merciless to her Grease producers, Fran and Barry Weissler. Audience members were dumbstruck at her crude humor, which didn’t get a lot of laughs. The Weisslers were big and getting bigger.

O’Donnell passed on hosting in 1999, but was back in 2000 as co-executive producer and co-hosting with Nathan Lane. Once again, she needled the Weisslers, coming down so hard you knew they had to be thick-skinned. Aren’t all producers? However, the question that haunted many in the audience, so used to seeing O’Donnell in pants suits, was who convinced her to wear a couture, but nonetheless ill-fitting, black gown which did nothing for her figure. One reporter wrote that he came across as Morticia from The Addams Family.

Stars, stars, and more stars that what you can expect! There’ll be performances from the 2016 Tony-nominated Best Musicals and Best Revivals. The telecast will feature a not-to-be missed performance by Gloria Estefan and the cast of On Your Feet! The Story of Emilio and Gloria Estefan.

Tony nominees on hand to entertain will be Laura Benanti, Zachary Levi and Jane Krakowski , She Loves Me; Alex Brightman and cast of School of Rock; Danielle Brooks, Cynthia Erivo, and cast of The Color Purple; Danny Burstein and cast of Fiddler on the Roof;Carmen Cusack and cast of Bright Star; Brandon Victor Dixon and Adrienne Warren, and cast of Shuffle Along, Or The Making of the Musical Sensation of 1921 and All That Followed; Lin-Manuel Miranda, Phillipa Soo, Leslie Odom Jr., Renée Elise Goldsberry, Christopher Jackson, and Daveed Diggs, and cast of Hamilton; Jessie Mueller, Christopher Fitzgerald, and  and the cast of Waitress: and cast membersof Spring Awakening.

The 70th Annual Tony Awards begin at 5:30 P.M. on www.TonyAwards.com with live Red Carpet coverage, followed by the Behind-the-Scenes Show complementing the telecast, airing live on CBS from 8 P.M/7c (delayed PT) – 11 P.M, from the Beacon Theatre. Hosting will be Tony winner James Corden and host of CBS’ Late, Late Show, who’ll certainly bring along his favorite catch phrases —  The incredible! The beautiful! The magnificent! The sensational!

Check www.TonyAwards.com, hosted by IBM, where you’ll find a roster of the nominees and nominated shows, a ballot for voting, video vignettes with nominees and past winners, and interactive features such as mobile alerts, Tony trivia, an archive of nominees/winners, and a profile of Antoinette Perry, namesake of the Awards. You can watch the Tony Awards online with CBS All Access.