What do the Rolling Stones, Sting, Willie Nelson, Bob Marley, The Temptations,  Motorhead, Kenny Rogers, and the Dalai Lama have in common? They played the historic, Art Deco 2,894-seat Beacon Theatre. Thanks to Radio City’s New York Spectacular, the Tonys are moving on up – to the Upper West Side, to join that iconic list.

The excitement’s building. Harry Winston and Tiffany’s have raided their vaults for diamond loan outs. Rentals of black tie have been exhausted. Designers have fitted their gowns. Nerves are at the breaking point, but the champagne’s iced and gift bags are stuffed with luxury items. The only downer is that with the Beacon being two-thirds the size of Radio City Music Hall, a lot of fans who wanted to be there – no matter the sky-high price, won’t even get to sit in the balcony. That’s where many sponsors and cast members of nominated shows will be. 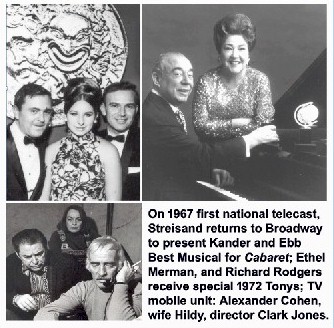 The 70th Anniversary Tonys is a far cry from the Awards’ humble beginnings. At the first ceremony, in April, 1947, a banquet at the Waldorf-Astoria, producer Brock Pemberton first used the word Tony for the prizes. There were no mounted silver medallions with the masks of comedy and tragedy on one side and a small engraving of Antoinette Perry on the other. Winners received a scroll – and, for the women, an engraved compact; for the men, an engraved cigarette lighter.

From the first national Tony Awards telecast in 1967 right through last year’s presentation, there’ve been so many memorable moments, sadly too many to list.

Memories, More Than a Few

One sensational moment came in 1983 at the Uris Theatre in an all-star salute to the Gershwins [for whom the theatre was renamed at broadcast’s end] that featured Ginger Rogers, Jack Lemmon, Diahann Carroll and, among others, Dorothy Loudon. 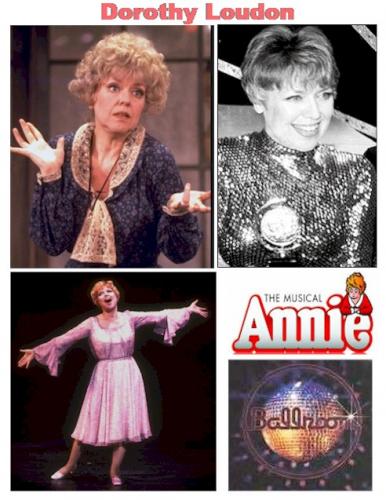 The Gal Who Knew How to Stop a Show

Miss Loudon who had a delicious, devilish sense of humor could be quite bawdy. She began her Broadway careerin 1962 and was vastly popular as one of the gals who was just one of the boys. Very simply, she was an adored journeyman actress. When she made her spectacular 1983 entrance, the house erupted in applause. The response threw Miss Loudon for a split second, but conductor Elliott Lawrence kept the music going. As she began, in that famous growl of a belt, an obscure Gershwin/ Herbert Stohart song from 1925’s Song of the Flame, “Vodka,” the response approached pandemonium. Miss Loudon said, “I couldn’t believe what I was hearing. I was on Cloud Nine and could have floated offstage!”

Then there were the twin showstoppers at 1984’s Tony tribute to Broadway’s tunesmiths. Miss Loudon entered the Gershwin stage in a white gown dotted with rhinestones and a mink-trimmed plunging neckline. It was worthy of Catharine the Great! And she wore a tiara. Standing atop a silver Rolls Royce, she was serenaded by Robert Preston, Tony Randall, Tony Roberts, Robert Guillaume, Larry Kert and a male chorus – all in red riding outfits in tribute to Mame, revived that summer with Miss Lansbury returning in the lead.

Miss Loudon didn’t sing, but her ad libs were priceless: “Don’t look in your program! It’s me! Oh, Jerry [Herman], think of me for the sequel! I was thinking of keeping the gown, but I got one just like it at home. So I’m gonna keep the car! And the boys.” Moments later, she brought the house down again with a rendition of “Broadway Baby” from Follies.

By the time she won a 1997 Tony for Annie and was nominated in 1998 for Ballroom, she was a candidate for sainthood. Miss Loudon left the stage she so loved in 2003 as the pure definition of Broadway pizzazz. 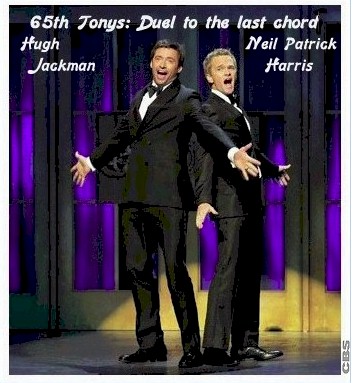 The 65th Tonys (2011) were hosted for the second time, by Neil Patrick Harris, were an avant garde production number, “Broadway Isn’t Just for Gays Anymore” and when he introduced three-time Tony host Hugh Jackman for their  battle-of-the- hosts medley of show tunes that included Irving Berlin’s “Anything You Can Do (I Can Do Better” from Annie Get Your Gun. It was also the season for The Book of Mormon to break the all-time number of Tony wins, The Scottsboro Boys, and marked Harry Potter’s Daniel Radcliffe return to Broadway in How to Succeed … It was also the telecast whereCBS kept both hands on the Bleep Button in case Chris Rock, starring in The Motherf**ker with the Hat, let loose with a litany of four, five and 13-letter words. 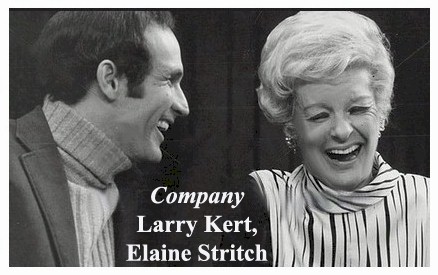 The Understudy Gets the Nomination

Amazingly, in addition to never being inducted into the Theatre Hall of Fame, Larry Kert wasn’t nominated for a 1958 Tony for his Tony in West Side Story. However, he holds the distinction of being the only cast replacement to be Tony-nominated in 1971 for Best Actor, Musical for his Bobby in the original Company. He won that honor over opening night star Dean Jones, who two weeks into the run and after recording the cast album, pulled out for reasons still unknown [though many were given].

The Tony Administration Committee ruled that not enough nominators caught Jones, whose reviews as Bobby could have established him as a major Broadway player after such Disney fare as That Darn Cat! and The Love Bug.

“It was a crowning glory moment,” said Kert, who died in 1991, three days after the Tonys. “Hal Prince and the entire company of West Side Story were puzzled how leading lady Carol Lawrence was nominated in the Featured category. To this day, I can’t fathom why Chita [Rivera] was overlooked – as I was. So, being nominated for Company was sweet, indeed.”

Speaking of WSS, it was nominated for six Tonys, including Best Musical – losing to Meredith Wilson’s Music Man; stunning even Mr. Wilson. It won for Jerome Robbins’ choreography and Set Design. However, in what appeared to be a purposeful snub, only Wilson was nominated in the score category. He won!

[In yet another nominating committee mindboggler, Barbara Cook, The Music Man’s co-star, was nominated in the Featured category.]

Ms. was president of the American Theatre Wing, which was co-founded by Antoinette Perry, for 32 years. The Wing now co-presents the Tony Awards with the Broadway League. Mr. spent 37 years on the Tony Awards – eventually becoming a producer and multi-Emmy Award winner before stepping in to fill the position of Wing of president. Both have vivid memories.

She cherished Anne Bancroft’s win at the 1958 Tonys, for Best Actress, Play, for Two for the Seesaw. “Anne excitedly ran the gauntlet of tables and chairs in the ballroom to the stage to breathlessly take her Tony from the hands of Laurence Olivier. She looked into Larry’s gorgeous eyes and sighed, ‘I wish you came with it!’ It brought down the house.” 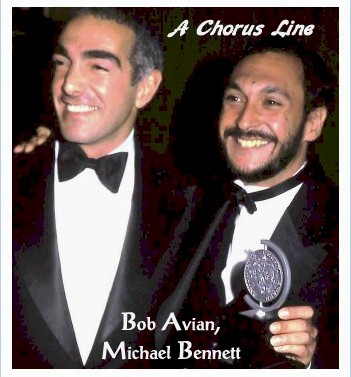 The 1976 Tonys was the year of A Chorus Line [12 nominations in 10 categories and nine wins including Best Director]. “When Michael Bennett and Bob Avian’s names were announced as winners for choreography,” recalled Mrs. Stevenson, “Michael bounded out of his seat and kissed his partner. That was a first, and for the rest of the evening the floodgates were open and everyone was kissing!!”

Somlyo reported one of the funniest moments came in 1967 on the first national telecast, hosted by Marty Martin and Robert Preston. “It was a star-studded evening with Lauren Bacall, Kirk Douglas, Zero Mostel, and Barbra Streisand presenting. Flashers were in the news. We were a class event with Alex [producer Alexander Cohen] dictating everyone wear black tie – stars, ticket takers, ushers, TV crew, stagehands. But…

“Barbara Harris was accepting for The Apple Tree, and from out of nowhere this man ran down the aisle, jumped onstage, and planted a kiss on her.” Then, sprinted like a panther into the Shubert Theatre wings. Harris, a nervous wreck even in calm circumstances, was visibly shaken. Jerry Adler [later an actor: The Sopranos, The Good Wife] was stage manager and Alex yelled ‘Stop that man! ‘ Jerry said, ‘Who?’ Alex replied, ‘The guy in the tuxedo!’ ‘All the men are wearing tuxes,’ exclaimed Adler. [The man infiltrated the proceedings as an ABC-TV crew member.] The following year, Alex rescinded the decree that everyone had to wear black tie.” 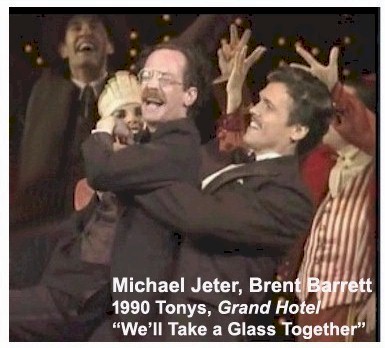 They agree that their single, most moving Tony memory was in 1990 when the late Michael Jeter won Featured Actor, Musical, for Grand Hotel. “It was an emotional moment,” said Ms. Stevenson, “as this tiny man leaped to the stage and stood there so humble. He said, ‘I was an alcoholic. I was a drug abuser. I was the lowest thing you can imagine. But I came back to win this, and if I can do it anybody can.’ You could hear a pin drop. He was clutching his Tony as if he’d never let it go.” Said the late Mr. Somlyo, “Whenever I see that moment, it brings tears to my eyes. What that man accomplished, speaking from the heart. It was much more effective than reading prepared remarks or a long list of thank yous.”

The Man Known to Speak His Mind

In 1984, two years before long time executive producer Alexander Cohen stepped down [that’s the way it was reported, but there was ill will on his part] as executive producer of the Tonys, he’d had two sleepless days of prep and rehearsal. His immense dislike for tough New York Times critic Frank Rich, dubbed The Butcher of Broadway for his scathing reviews, was legend. As an ashen Cohen exited the stage door of the Gershwin Theatre after the dress, a Times reporter yelled, “How about a scoop, Mr. Cohen?” Well, droned Mr. Cohen  loudly as he passed, “In case you’re wondering, this year’s theme is F**k you, Frank Rich!'”

On the 70th Anniversary of the Tony Awards: A Look Back – Part Two; What to Expect on Sunday on the Tonys