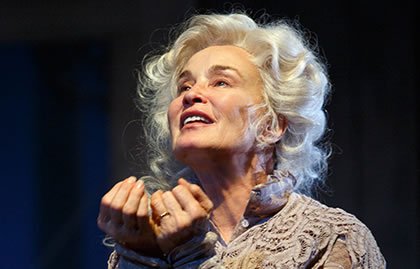 A piercing profile of O’Neill’s own family, Long Day’s Journey is meant to be a quartet of agony, but Lange’s high-strung playing of Mary’s drug-addicted pain turns it into a concerto with the other three Tyrones on second fiddle. It’s still a moving, vital production but not the full symphony of sorrow O’Neill intended. Platt’s Evan is meant to be the center of the show and he delivers the necessary ache and yearning.

In Journey, each of the four Tyrones plays out their toxic relationship with the past in a single day in 1912 at their gloomy summer cottage. Tom Pye’s set features a low ceiling tilted at a menacing angle to signify the clan’s sense of inescapable misery while Natasha Katz’s lighting provides the right ghostly atmosphere. Father James is a famous actor handcuffed to regret because his Shakespearean ambitions were crushed by the easy lure of a lucrative melodrama (O’Neill’s real father starred in the kitsch-y Count of Monte Cristo for many seasons.) Partially because of James’ stinginess, mother Mary became dependent on morphine and is in relapse after a brief clean period. Sons Jamie and Edmund have their own demons of alcoholism and tuberculosis respectively.

Lange’s physical life is so precise you can feel the pangs of Mary’s withdrawal and the cherished release into her drug-induced dream world far from the miserable guilt of her marriage. This comes as something of a surprise because Lange’s previous Broadway attempts at great-lady roles were either too small—Blanche in A Streetcar Named Desire—or overblown—-Amanda in The Glass Menagerie. Perhaps it’s because she played the O’Neill role on the London stage in 2000, but the Oscar winner’s stage craft has caught up with her film brilliance.

Gabriel Bryne’s James is too subdued and John Gallagher, Jr.’s Edmund comes across as whiny rather than tormented. Michael Shannon’s quirky Jamie is frighteningly oft-kilter and arresting, but he doesn’t have enough stage time to equal Lange’s impact. Colby Minifie provides welcome comic relief as the such maid Cathleen.

Despite the imbalance, Kent’s production is haunting and intimate. He often has the characters come to extreme edge of the stage practically throwing their desperate plights into the audience’s collective lap.

Dear Evan Hansen also deals with families in pain. The title character is an isolated teen outsider with a long-absent father and an overworked mother. At Evan’s school, another suffering kid, rebellious Connor Murphy, falls over the edge of despair and commits suicide. Through an accidental meeting between the two, Evan becomes involved in an elaborate internet hoax convincing the world and Connor’s grieving family that the boys were best friends when in fact, they didn’t even know each other. But his new status as encouraging pal of the dead kid makes Evan into a media hero, a substitute son for the Murphys and boyfriend to Connor’s sister Zoe. Should he tell the truth and go back to being a nobody?

That’s the crux of this jarring, small-scale gem, directed with his usual fluid grace by Michael Grief (aided by Peter Nigrini’s impressive video designs recreating the universe of the Internet.) Steven Levenson’s compassionate and witty book goes far beyond Afterschool Special cliches and the songs by Benj Pasek and Justing Paul run the gamut from riotous comedy to wrenching ballads to piercing character portraits. As mentioned earlier, young Ben Platt is stunning as the shy Evan, making the young man’s urgent need for companionship so real you can feel his pain (just as Jessica Lange makes you feel Mary’s morphine cravings.) The rest of the ensemble is equally moving, especially Rachel Bay Jones as Evan’s well-meaning but bewildered mother and Laura Dreyfuss as the angry, needy Zoe.

Jesse Tyler Ferguson of TV’s Modern Family, makes an attempt at a bravura performance in the revival of Becky Mode’s solo play Fully Committed. But his energetic if narrow limning of 40 characters led me to admire him for trying such a monumental task rather becoming absorbed in the crazed action. Originally presented Off-Broadway in 1999, the show employs one actor to play the stressed phone-reservation worker at a posh Manhattan eatery, his co-workers, his family, and all the demanding clients at the other end of the line. Ferguson can be endearing and amusing, but he has a limited range of funny voices and mannerisms which lose their freshness well before the 90-minute running time. Much like the show’s trendy restaurant which features ridiculously expensive dishes dusted with edible dirt, this Fully Committed is a cute little show but not worth the Broadway prices. 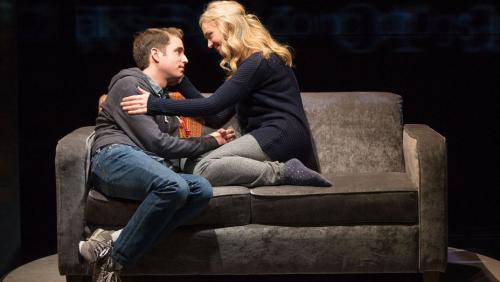 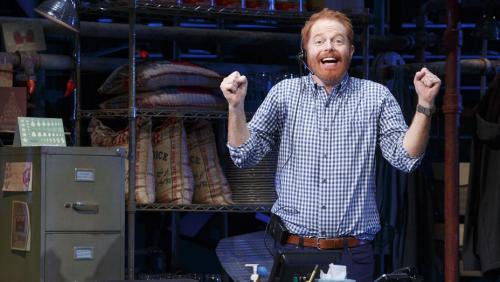 Originally Published on May 14, 2016 in ArtsinNY.com