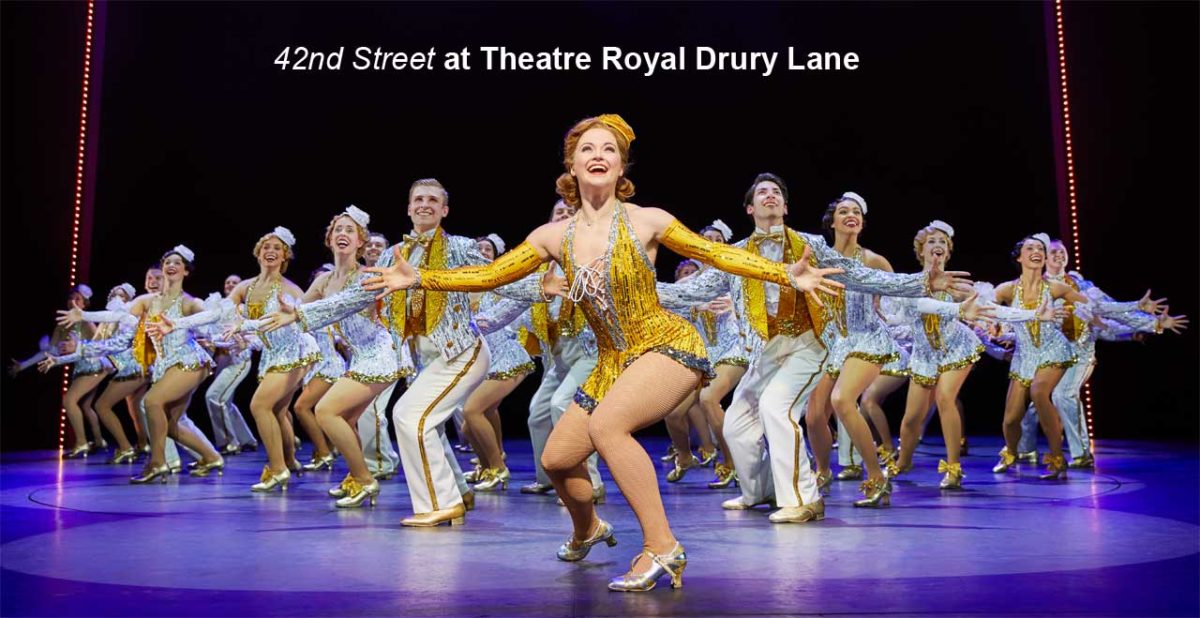 Opening Night was a benefit for the Duchess’ charity, Each [East Anglia’s Children’s Hospice, which supports families/children with life-threatening conditions across Cambridgeshire and three other areas]; and she was the guest of honor in the Royal Box. At the curtain, the Duchess was presented with a pair of tap shoes. Among the celebrities in attendance was Oscar winner Morgan Freeman.

choreography by Busby Berkeley. The plot is set against a producer’s comeback effort at the height of the 30s Depression with a big musical, which on the eve of its opening loses its leading lady to an unfortunate accident. With no time to spare and as it appears the show will close, the ingénue steps in, goes out, and, yes, returns a star.

Its score of Tin Pan Alley hits include “About a Quarter to Nine,” “Boulevard of Broken Dreams,” “Dames,” “Getting Out of Town,” “I Only Have  Eyes for You,”  “You’re Getting to Be a Habit with Me,” “With Plenty of Money and You,” and showstoppers “42nd Street,” “Lullaby of Broadway,” “Shuffle Off to Buffalo,” and “We’re in the Money.”

There’s a stage-filling cast of 55 plus, which includes the largest dance ensemble ever, and orchestra of 20 plus.

The musical is headlined by two-time Grammy winner Sheena Easton –

Directing is Mark Bramble, with choreography by Randy Skinner. Todd Ellison is music supervisor, with music direction by the lively veteran Jae Alexander. Sets are by Douglas Schmidt. There’s Champion’s choreography and new choreography by four-time Tony and three Drama Desk-nominee Skinner, who with Karin Baker, was Champion’s tap associate on the Tony-winning 1980 Broadway original. Skinner was choreographer for the Tony and DD-winning 2001 Broadway revival, as well as national tours and international productions.

“Opening Night was thrilling for the cast to hear the audience response after weeks and weeks of drilling,” Skinner says. “It’s been wonderful to watch as they absorbed this style of dancing. They’re certainly being rewarded by the overwhelming audience response and supportive reviews.”

He and Bramble have long been associated with 42nd Street productions worldwide and have high praise for Easton and tapper extraordinaire Halse.

“How appropriate for a pop diva to be portraying a Broadway diva,” says Skinner of Easton. “She’s incredible and seems born to the stage. [Easton took a long leave from show business to raise her children.] Mark and I knew she had that great belt, but her strong soprano was a surprise.”

Halse is “one of the finest dancers I’ve come across,” he adds, “and quite a quick study, which has made working with her such a joy. She can do anything! I know we’ll be seeing a lot more of her.”

The Telegraph headlined their review: “Achingly beautiful revival of an American classic.” Their Dominic Cavendish gave it five stars, writing it was a “stampeding frenzy of a tightly-drilled army of hoofers in the grandest, most palatial theatre in town.” He called the tap beat “an extraordinary, spine-tingling sound.” He added, “David Merrick . . . said he was after the ‘biggest musical since the Second World War.’ And size is absolutely everything in this shiny, streamlined homage to a vanished world of razzmatazz . . . It’s miles apart from Hamilton in terms of diversity . . . almost the un-reinvention of the musical.”

He had special praise for Skinner’s staging of a Berkeley-esque number “that sets a circle of prone, scantily-clad chorines on a revolve beneath a giant mirror, splaying and closing their legs as they turn: an absurd, tasteful floral arrangement of fleshy suggestiveness.”

The Times’ Ann Treneman, bestowing another five stars, noted, “The show begins with the conductor Jae Alexander rising out of the pit, turning and shooting us a big fat smile, as the curtain rises an inch or two to reveal a row of shoes, all in Popsicle pastels, tapping up a storm. Think a stenographer after 42 coffees. And they are all in perfect harmony. This is an old-fashioned glamour musical that keeps on giving when others would have called it quits.”

In his five-star Express review, Neil Norman called 42nd Street the 30s equivalent of the blockbuster movie: “It’s designed to blow you away. Its key ingredients may seem like clichés but this is the musical that invented them: the Busby Berkeley dance routines performed by scores of girls in feathers, sequins and not much else, the backstage backstabbing, the desperation of the chorus girls and boys in the Great Depression when to be out of a job meant not just hardship but destitution

. . . The show offers more spectacle than Cecil B. DeMille and so much glitz you’ll need to wear sunglasses. This is old-fashioned entertainment on an epic scale. ”

Skinner said the timing couldn’t be better for a show like 42nd Street. “With all the turmoil and uncertainty in the world, this is a show where people can sit back and relish in the energy and joy radiating from the stage – and not just from Douglas Schmidt’s fabulous recreation of the New York Theatre District of old.”

He adds, “Because I have tapped my entire career, I have to remind myself how powerful it is to see our company of 40 dancers in Roger Kirk’s stunning array of gorgeous costumes taking over the entire stage and tapping on giant coins and up and down staircases.”

There have been several attempts to bring this elaborate revival of 42nd Street to London. “There was always the problem of not finding a theatre that could accommodate the size of the production. How extremely ideal it is to be able to return to the show’s original West End home. The Drury Lane is perfect. The stage is so much larger than any on Broadway. The depth and wing and fly space are unbelievable.”

Skinner relates that he’s had a great time visiting the Drury Lane’s art and mural-covered hallways, Royal Circle anterooms, and the Royal Box. “Such history!” he says.

He’s reunited on the show with longtime associate choreographer Kelli Barclay (White Christmas, State Fair, Ain’t Broadway Grand); and a creative that Broadway musicals don’t have, the resident choreographer, young, tall Simon Adkins (Bob Crewe in Jersey Boys; Wicked; The Producers; and Don Lockwood in Singin’ in the Rain; so many more).

“My job is to work closely with our associate director Stephen Whitson and do what Kelli would be doing if she was allowed (under British Equity rules) to stay over here,” he points out.

“Simon and I had never met,” laughs Barclay, “but I feel I’ve known him my entire life – in my heart. He knows the territory from the incredible number of shows he’s done.”As it turns out, he’d done a production of 42nd Street and was adept at tap.

“When Simon auditioned,” states Skinner, “Kelli called my attention to him. When I watched him, I immediately sensed there was a maturity about him in addition to his excellent dance technique. I pulled him aside to see if he’d be interested in being considered for resident choreographer. He was. The next day, I had him assist. He met every challenge. Simon’s doing a terrific job watching over and maintaining the dancers and all that goes along with a musical this size.”

Dance comes naturally for Adkins because his mother was a dance teacher. “So, I’ve been dancing since about age three and acting, singing, and all sorts of dance competitions and shows from there! At university, I took math, biology, and geography to make sure I had something to fall back on. Straight out of college, though, I got my first Equity show, Chicago, and have been fortunate to be in a number of American musicals, some of which played right here. So, the Drury Lane’s like a second home.”

Barclay was in awe of the huge Drury Lane auditorium, and wondered how the show would play. No worries. She notes, “This production has been designed with a slightly raked stage that makes you feel close no matter where you are; and it’s done to a degree that doesn’t make it difficult on the dancers.”