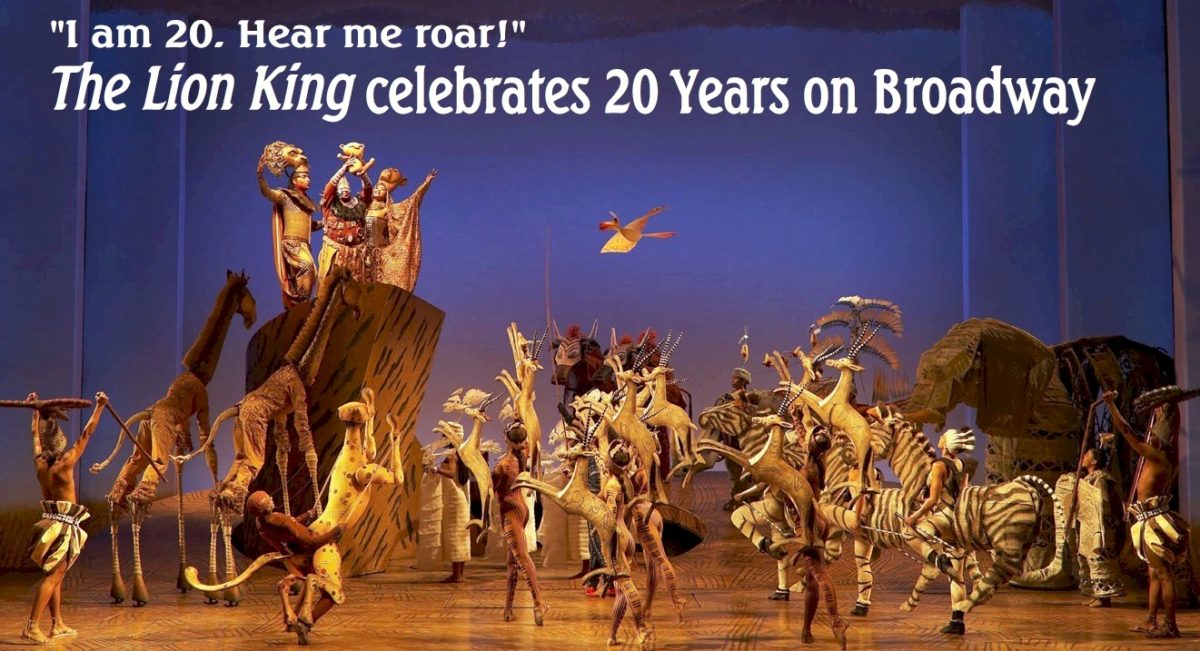 Props must go to costume designer and mask co-designer Julie Taymor, who became the first woman in Broadway history to win the Tony for Best Director, Musical. Taymor stays in frequent touch with the show and has a team in place to keep it fresh and has supervised productions worldwide. Before the official anniversary, however, there’ll be a gala performance with many original cast members and creatives on hand on November 5. Already there’s a caricature of the Rafiki character, originated by Tony-nominee Tsidii Le Loka, on Sardi’s walls of fame, Currently playing that prized role, long a favorite with audiences, is Tshidi Manye.

There’s also going to be an unheard of special gift to lucky Lion King lovers: a free — that’s right: FREE – performance on November 15. The Lion King is the third longest running musical in Broadway history – just behind Chicago and the champ The Phantom of the Opera. The production has been seen by over 90 million in 19 countries — on every continent except Antarctica.

The show’s award room is crammed with honors from around the world. Here, it garnered six Tonys, including Best Musical, and, among numerous other honors, the New York Drama Critics Award, Best Musical. The Grammy-winning cast CD is certified Platinum. In the U.K., TLK won the Evening Standard Award for Theatrical Event of the Year and Olivier Awards for choreography and costume design.

TLK’s music is a fusion of Western popular music and distinctive sounds and rhythms of Africa. The majority of the Tony-winning score is by Sirs Elton John and Tim Rice. Contributing additional music is Hans Zimmer, who wrote the movie score. Songs include: “Can You Feel the Love Tonight?” [Oscar, Best Song], “Circle of Life,” the vastly popular “Hakuna Matata,” “I Just Can’t Wait to Be King,” “They Live in You,” and the haunting ballad “Shadowland.” Clement Ishmael is music supervisor.

The book has been adapted by Roger Allers, who co-directed Disney’s animated feature, and Irene Mecchi, who co-wrote the screenplay. Choreography is by   Jamaican modern dance master Garth Fagan, founder and artistic director of his own dance company.

Since the musical’s 1997  Broadway  premiere,  24  productions  have  been  mounted  around  the world. There’ve been several national tours. The 25th global production and first international tour premieres in Manila next March. Worldwide grosses exceed that of any film, Broadway show or other entertainment title in box office history. TLK is still a solid hit on London’s West End. Among cities with current productions on the boards are Hamburg, Madrid, Mexico City, Shanghai, and Tokyo.

Some interesting trivia: There’s a menagerie of more than 230 giant puppets, representing  antelope, baboons, birds, elephants, giraffe, hyenas, lions, meerkat, and warthogs. Tallest, of course, are the 18-foot giraffes; the biggest: the elephant, who stands only five feet shorter.

To make Lion King painstakingly accurate, hair and make-up designer Michael Ward drew inspiration for his colorful work by researching various African tribes. One of the behind-the-scenes craftspersons is make-up supervisor Elizabeth Cohen, who has her share of stories when things don’t go as planned. “It’s our job to get it right,” says Cohen, “but there’re always things you’re not prepared for.”

Like the time a former Nala, then played by Kissy Simmons, complained of illness. “We only had one cover for her and she was very pregnant.” Backstage crews, like Boy Scouts, learn to be prepared. During intermission, Cohen and her make-up team pulled the cover from the ensemble to get her ready. But you can’t keep a trouper down and Simmons bravely raised her head and said, “I’m okay. I can go on.” And out she went, just in time for her big solo. However, even the applause was not a cure-all.

When Simmons exited, she informed the stage manager she couldn’t continue. “Of course,” says Cohen, “We had to discreetly pluck our cover off stage and quickly transform her into Nala.” The hair and sound folks went to work. Wardrobe supervisor Kjeld Andersen scrambled to put together a costume. They had her in the wings within seconds of Nala’s next entrance.” reports Cohen. “When she appeared,” laughs Cohen, “the audience had to wonder how Nala had gone from tall and statuesque to short and pregnant.”

With little make-up or touching up to do in Act Two, Cohen’s friends often ask why she stays on site until the curtain. She laughs, “That story explains why!”

It would be an understatement to say it takes a village to put on each performance of The Lion King – for instance, there are 142 people directly involved. These include 51 cast members – eight of whom are South African, 24 musicians, wardrobe staff of 19, a three-person hair and make-up department – not to mention a physical therapist, the stage and puppet crew, and five stage managers to keep check on everything.

Taymor, with  designer Michael Curry, hand-sculpted and painted the masks appearing in the iconic “Circle of Life” opening, which, with the help of their department of mask makers, sculptors, puppeteers, and artisans, took 17,000 hours to build.

In celebration of TLK’s 20th, the show is giving away every ticket via a free lottery to the 8 P.M. performance Wednesday, November 15th.

“Though it’s been seen around the world, The Lion King was born in New York City,” says Disney Theatrical president and producer Thomas Schumacher. “This free performance is our chance to thank New York City for 20 years of loving support. It’s our hope that audiences who could otherwise not experience Julie Taymor’s glorious vision will join us to toast the musical born here in our hometown.”

“The Lion King has been delighting Broadway audiences for 20 years,” states Julie Menin, NYC Commissioner of Media and Entertainment. “We are proud to be the home of this landmark show and congratulate the production on this milestone. The free ticket lottery to be held in Times Square and libraries throughout the five boroughs will give hundreds of New Yorkers a chance to see this wonderful show.”

On Sunday, November 12th, enter The Lion King lottery via a celebratory event in Times Square. Thanks to a partnership with the Mayor’s Office of Media and Entertainment, you can also enter at New York Public Library, Queens Public Library, and Brooklyn Public Library.  No purchase of any kind is necessary, but only one entry per person. Participants must be at least 18 years old. Entrants must be 18 or over to enter. Visit www.lionking.com/20 for the official rules, library lottery locations, and more information. The lottery is powered by Broadway Direct, and entries will only be accepted in person.

On November 12, from 10 A.M. – 6 P.M. in the Times Square plaza between 45th and 46th Streets, attendees will be able to enter the lottery and enjoy Lion King-themed activities — including a sharable photo opportunity inspired by the show’s iconic ‘Circle of Life’ moment on Pride Rock, autographs with cast members, and an up-close look at the show’s masks and puppets.

In addition, Snapchat users can unlock a custom Lion King lens (Broadway’s first ever) within the Snapchat app using a unique Snapcode. Once unlocked, users will be able to virtually “try on” Simba and Nala masks through Augmented Reality technology. For download information, visit the above site.

Photos by Brinkhoff-Mogenburg and Joan Marcus