November 30, 2022: The world’s foremost, all-male comic ballet company delighting the savvy and novices alike will be in residence at The Joyce Theater December 20 through January 8.  Who are they, how did the company happen? Are gallons of borscht required for upkeep? 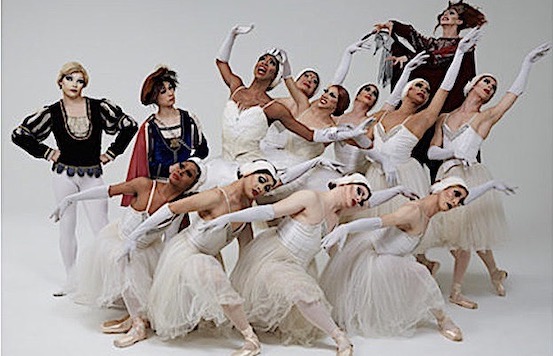 November 30, 2022: The world’s foremost, all-male comic ballet company delighting the savvy and novices alike will be in residence at The Joyce Theater December 20 through January 8.  Who are they, how did the company happen? Are gallons of borscht required for upkeep?

In 16th Century Italy ballet dancers were all men. Catherine di Medici brought the burgeoning art to France where aristocratic amateurs performed at the court of Louis XIV. It was Louis who established the first ballet school to create technique that would transform it into formal discipline. By the late 1600s, female ballerinas created the sylph image we see today.

Classical ballet, also called romantic ballet, system of dance based on formalized movements and positions of the arms, feet, and body designed to enable the dancer to move with the greatest possible agility, control, speed, lightness, and grace. (Britannica)

Fast forward to Charles Ludlam’s Ridiculous Theatre Company whose Trocadero Gloxinia Ballet Company burst on the scene in 1972 performing at venues like La Mama and Cubiculo. Gloxinia was apparently autocratically run. They took their clowning seriously.

Three members of the company broke off to establish the more flamboyantly camp Ballets Trockadero de Monte Carlo: Natch Taylor (Alexis Ivanovitch Lermontov and Syzina Lafuzziovitch), Anthony Bassae (Tamara Karpova) – “What we do must go beyond the illusion of female impersonation. It must work theatrically in terms of dance. But it must be fun!” – and Peter Anastos (Olga Tchikabournskaya) – “A lot of mukety-muck dance establishment didn’t necessarily like us. They thought what we were doing was terrible, insulting, and wrong, but we were celebrating ballet.”

Italicized biographies are of company members.

Olga Supphozova made her first public appearance in a KGB lineup under dubious circumstances. After a seven-year-to-life hiatus, she now returns to her adoring fans. When questioned about her forced sabbatical, Olga’s only comment was “I did it for Art’s sake.” Art said nothing however.

Yuri Smirnov – At the age of sixteen, Yuri ran away from home and joined the Kirov Opera because he thought Borodin was a prescription barbiturate. Luckily for the Trockadero, he soon discovered that he didn’t know his arias from his elbow and decided to become a ballet star instead.

Rarely does anything as broad as slapstick make its way to the stage though the visibly molting Dying Swan (after being chased by an errant spotlight) comes subtly close. Territorial annoyance, embarrassment after a missed step, collision, or continuance after the corps has moved on is some of the tomfoolery woven into exacting choreography. Storytelling remains sacrosanct. What the Trocks do was thought impossible before them.

Five years after the Stonewall Riots and first gay pride parade, with the community demanding parity and visibility, Ballets Trockadero, the all male troupe performing en travesty and en pointe, appeared at a loft in the meatpacking district. Arlene Croce of The New Yorker wrote the company was “dead on target and hilarious…It’s so damned all-seeing that I don’t think anything in ballet can be safe from it for long.” By 1977, the company had been presented on Broadway and national television.

Helen Highwaters has defected to America three times and been promptly returned on each occasion — for “artistic reasons.” Recently discovered “en omelette” at the Easter Egg Hunt in Washington, D.C., she was hired by the Trockadero, where her inexplicable rise to stardom answers the musical question: Who put the bop in the bop-shibop shibop?

Classical companies today require not only training but certain aesthetics. Few dancers in companies like American Ballet Theatre and The New York Ballet change facial expression. The preposterous Trocks have no such limitations. In this troupe female characters often push the men around. (Dancers get to play both male and female roles.) Expectations are usurped.

Artistic Director Tory Dobrin accidentally started dancing when a Los Angeles earthquake brought two high schools together and there wasn’t enough room in a required PE class. Fortuitously his teacher was Martha Graham trained. Dobrin was supported by his parents and lucky to be living in a hip, non-judgmental community. The dancer’s journey took him from West Hollywood to Paris, L.A. at 18, Texas (where he did some pointe work with teachers from Ballets Russes), then New York.

Maria Clubfoot – Last of the great Native American ballerinas: Larkin, Tallchief (Maria and Marjorie), Clubfoot. Maria, pride of the Luni Tribe, began her training with the Wounded Knee Ballet and blazed a dance warpath with her literal “Slaughter on 10th Avenue,” universally acclaimed and banned for Clubfoot’s use of traditional Indian weaponry.

Meanwhile directors of the Trocks grew at odds. Peter (Anastos) “wanted it to be funny with jokes inside choreography,” while Anthony (Bassae) said, “No, just do the steps-characterization is important.” Both left for alternative pastures.

In 1980, never having seen the company perform, Dobrin auditioned and was accepted. I ask how long it took him to adapt to their absurdity. “Quickly,” he smiles. The new member learned multiplee ballets in two weeks touring South America with artistic director Natch Taylor and the Trocks.  It was a time of military upheaval. Their invitation might’ve been a gesture of protest. Auspiciously the government didn’t realize what they were. Audiences were welcoming.

Boris Dumbkopf has been with the greatest ballerinas of our time; he has even danced with some of them. One of the first defective Russian male stars, he left the motherland for purely capitalistic reasons.

Watching Russian ballet videos gave Dobrin a good handle on the appeal of excess. “Maya Plisetskaya’s The Little Humpbacked Horse is wonderful, so full of characterization and personality,” he recalls. “We no longer saw that in American companies. Dance lovers missed the focus on personalities.”

“Guys who joined were often afraid of pointe. Nowadays everyone’s comfortable with it by the time they audition. It takes about six months to a year before I stop worrying about whether someone will develop tendinitis.” The company was receiving too little direction, there were people mugging. Health and safety seemed of secondary concern. On top of this, AIDS decimated the troupe. Yet Dobrin got hooked and stayed.

What about those small-minded people who objected to you? I ask. “During the eighties, they picketed, but we didn’t see or hear it…In Mexico City when Mt.  St. Helens erupted, someone stood up from the audience and accused us of being the cause…We played the Alhambra in Spain to a formal audience who, I think, expected Monte Carlo Ballet. Many of them left, but the next night we had a great audience… The worst were the New York critics and the dance world! The director of The Harkness Ballet School where I was teaching told me the Trocks would ruin my career. Only Jennifer Dunning and Arlene Croce supported us.”

Ludmilla Beaulemova – famed country and western ballerina and formerly prima ballerina of the grand Ole Opry, recently defected from that company when they moved to their new Nashville home. The rift was caused by their refusal to stage the ballet with which her name has become synonymous, I Never Promised You a Rose Adagio.

Work disappeared. The National Endowment for the Arts was in crisis. Threatened with possibly having to disband the company, Dobrin stepped in for a departing booker at Sheldon Soffer Management. It turned out he was really good at the job. The Trocks reassembled as a chamber company and held their ground as he learned what presenters wanted of them. (He also danced!) Slowly they built back up.

“When Natch left, the company was still like a mom and pop store. I started moving into the artistic side, running it with Eugene McDougle and Mike Gonzales.” A contract in Japan successive summers provided funds to work elsewhere. (He’s “enthralled with Kabuki.”)

Dobrin says his biggest challenge is being flexible and maintaining a positive outlook in trying situations. Things happen on the road. They were in Bilbao and booked to open a festival in Budapest when the volcano erupted. Without flights, the Trocks rented a bus traveling 30 hours over two days to arrive on time. Facing a massive storm in New York, the company spent twelve hours at the airport before getting out to the Spoleto Festival. They travel with everything, nothing is separately sent – just in case. Dobrin expects the worst, prepares and adjusts accordingly.

Jacques d’Aniels was originally trained as an astronaut before entering the world of ballet. Strong but flexible, good natured but dedicated, sensible but not give to unbelievable flights of fantastic behavior, Mr. d’Aniels is an expert on recovering from ballet injuries (including the dread “Pavlova’s clavicle”).

About five years ago, the Trocks hired a development director to secure grants. For those of you able to donate, they are a worthy not-for-profit. Some of the dancers have drag backgrounds. Some have married within the company (none at the moment). Guests are an extreme rarity as sensibilities need to be learned. I ask about the artistic director’s bucket list of ballets. These COST. He’d love to stage Balanchine’s Western Symphony, but the foundation said no to the choreographer. A more positive response has been garnered from the Agnes de Mille Foundation. Stay tuned and “Keep on Trockin!”

Recommended: The 2017 documentary Rebels en Pointe which can be viewed on Prime Video.

The Trocks remain committed to supporting, mentoring, and inspiring the next generation of LGBTQ performers and arts appreciators, supporting the LGBTQ elderly and LGBTQ youth through the proliferation of dance engagement activities with its community partners in New York City, and serving as an integral link to the history and traditions of LGBTQ performance.

As part of that commitment, the Company’s NYC Dance Engagement Initiative offers low- or no-cost workshops in ballet, comedy, creative process, drag and more for vulnerable LGBTQ elderly and youth in conjunction with partnerships with SAGE, Greenwich House, and Ali Forney Center.