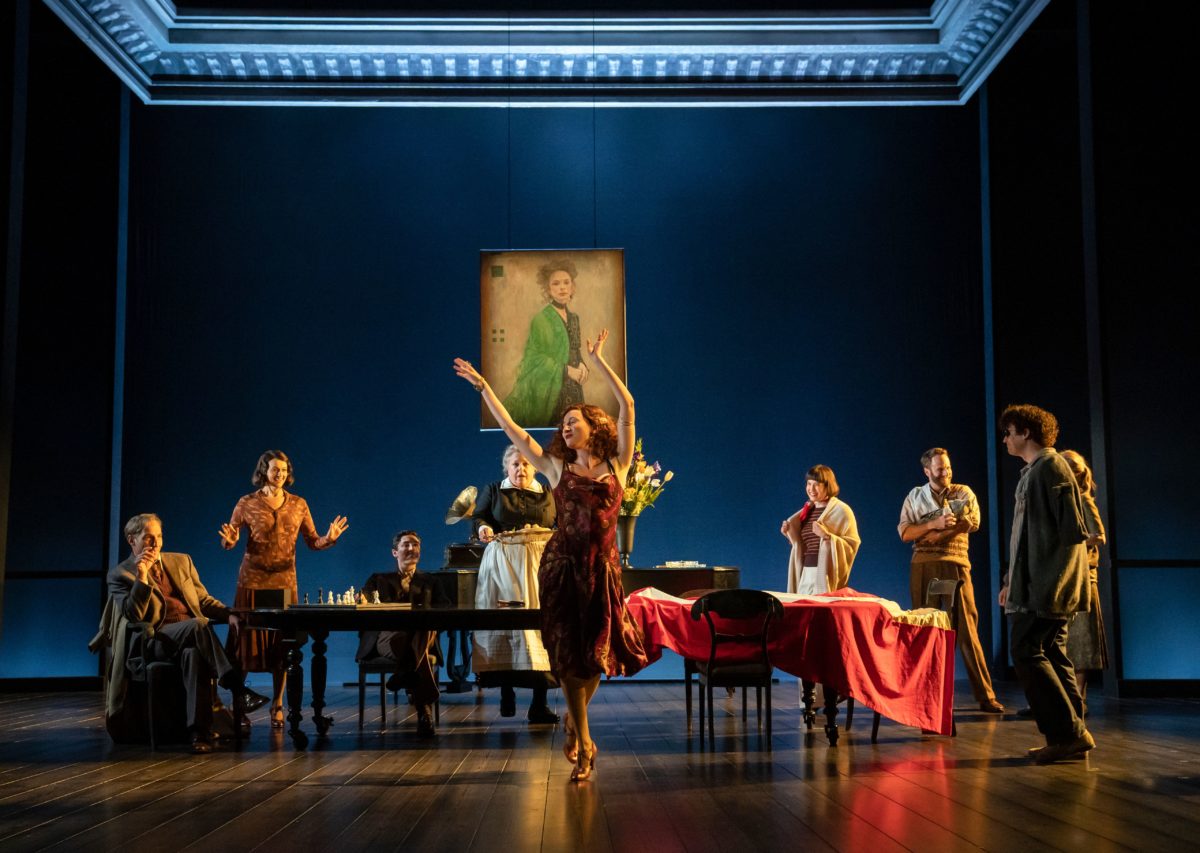 The Broadway Company of “Leopoldstadt”.

Set mainly in the same large room of a Viennese home, in scenes taking place in 1899, 1900, 1924, 1938, and 1955, and employing a massive cast of 38, it dramatizes the fate of two wealthy, highly educated, richly cultured, related Jewish families—named Merz and Jakobowitz—as they struggle to balance their dignity and traditions on the tightrope of an anti-Semitic world. Ultimately, for all their accommodations, including conversions to Catholicism and interfaith marriages, they cannot avoid the imminent horrors, although a small number manage to escape.

Large-scale scenes go by in which the stage is filled with fathers, mothers, grandparents, husbands, wives, children, cousins, nephews, nieces, uncles, and aunts, and potential lovers. First we see them in the height of their assimilated fin de siècle prosperity (celebrating Christmas, no less), then in their responses to post-World War I Austrian politics, and, finally, cowering before a particularly cruel Nazi official (a believably hateful Corey Brill) on Kristallnacht. After viewing the gradual dissolution of their position and wealth, it is hard for our stomachs not to churn at the overwhelming sense of loss in the final, post-World War II scene when only three people—one the Stoppard-based character—appear in the now stripped-bare room.

There have been, of course, many plays presenting, with epic sweep, the story of a particular group, and its descendants, across the years. Most recently we had The Lehman Brothers Trilogy, which, using only three actors, needed three plays taking nearly four hours to tell its story. In Leopoldstadt, despite its over three dozen actors, the history is condensed to an intermissionless two hours and ten minutes (a preshow bathroom visit will be mandatory for many).

Stoppard manages to give most of those assembled significant dramatic material to chew on, thereby presenting their individual stories in a way that reveals them—even if more in outline than three dimensions—as human beings to whom we can relate, while also illuminating issues of anti-Semitism. The plethora of characters, however, does create the dilemma of trying to keep track of who’s who and how they’re related to one another.

The most fleshed-out subplot involves the affair of the elegant Gretl (British actress Faye Castelow, of the original cast, superb), Catholic wife of clothing manufacturer Hermann (David Krumholtz), a large portrait of whom dominates the upstage wall much of the time. Her lover is a smarmily dashing Gentile army officer, Fritz (Arty Froushan, perfectly condescending). This incites a possible duel between husband and lover, albeit not over the affair but what Hermann perceives as an insult to his wife. The point being made is that the officer, much as he might otherwise engage Hermann with pistols, is prevented by his military code from having such an encounter with a Jew.

If you’ve viewed the Ken Burns documentary series on “The U.S. and the Holocaust” you’ll find it helpful in absorbing the rather abundant historical explanations disguised as dialogue. These regard not only the position of the Jews in early twentieth-century Europe, but the political background to the rise of dangerous nationalism and, by extension, Nazism. Those for whom these history lessons are unfamiliar may be hard pressed to appreciate much of them, delivered as they often are in rapid, impassioned arguments.

One of the more immediate discussions occurs in 1899 when Ludwig (an intense Brandon Uranowitz), a number theorist, argues for the necessity of a Jewish state while Hermann advocates for the gradual assimilation of Jews into Viennese society. The latter, he’s certain, is achievable despite the constraints on Austrian Jews denoted by Ludwig. We recognize, of course, the irony behind the debate.

Such arguments, carried out between emotionally committed participants, sometimes seem more the result of well-researched preparations than organically natural conversations. Nevertheless, being by Stoppard, who knows how to throw a joke in when needed, they’re always compelling. This may partly be because the actors, despite being mostly American, use high British accents, which sometimes gives their speeches a feeling of rhetorical artificiality. Seth Numrich, for example, playing Hermann’s angry son, Jacob, who lost his arm and an eye in the war, rants too much, although he’s far better when playing English journalist Percy Chamberlain, stepfather of Leopold, the Stoppard avatar.

Sir Tom Stoppard, born Tomáš Sträussler in 1937, comes from Czechoslovakia, not Austria, which is only one of the many ways in which Leopold is a fictional character and not a biographical one. Leo is nevertheless an excellent vessel for revealing Stoppard’s own experience as someone who has so successfully blended into largely non-Jewish society that they have lost touch with both their Judaic roots and their not so distant familial past.

In the play’s most moving scene, set in 1955, Leo (Mr. Froushan), a young British writer, comes face to face with this dilemma when, in the now empty space once filled with music, art, laughter, and intellect, he meets two relatives, Rosa (Jenna Augen) and Nathan (Mr. Uranowitz). The first was able to leave Austria for New York before the war, the second is a Holocaust survivor. Each was present—as was young Leo—in this room as children. Leo’s incremental awareness of being there, and his recognition of the past, provides the play’s most cathartic moment, partly because of Mr. Froushan’s touching performance, so utterly different from his portrayal of the arrogant Fritz.

Mr. Marber’s staging uses the large company to paint masterful pictures of a family descending from gilded age prosperity to Nazi-dominated abasement to postwar desolation. He’s helped enormously by Richard Hudson’s evocative set of a once elaborate Viennese apartment, framed overhead by gorgeous molding. The period-perfect costuming of Brigitte Rieffenstuel, the exquisite lighting of Neil Austin, especially during the wonderfully candlelit enactment of a Passover Seder, and the sound design of Adam Cork add priceless touches to the presentation, as do Isaac Madge’s black and white projections of period stills and videos.

Leopoldstadt helps start Broadway’s new season off with a first-class drama it will be hard for its successors to top.