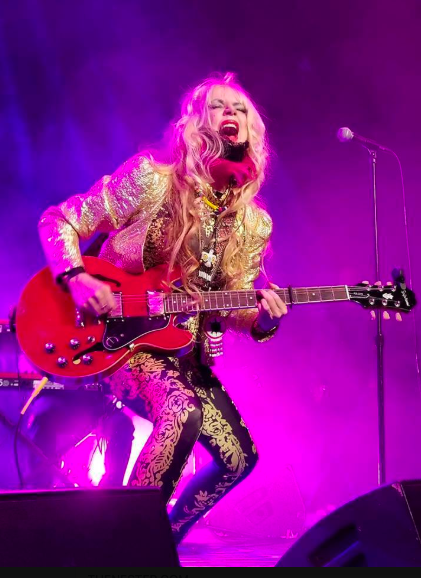 The January 11 sold out show at Union Transfer on Spring Garden St. in Philadelphia was the grand finale of Philly Loves Bowie Week and featured 25 of Bowie’s best songs, covering the legendary artist’s material from “Space Oddity” to “Lazarus.”

David Bowie would have been proud to see his former opening act goddess and friend Phoebe Legere performing and paying tribute to his greatest hits. Strutting her uber-cool and mega-talented rock persona in a dazzling gold suit, Phoebe Legere played her red semi-hollow Gibson guitar in a style reminiscent of Mick Ronson’s finest licks.

The fanatical crowd enthusiastically cheered as Legere took the stage and duplicated Ronson’s mythical high-octane grit and incredible tone on the opening groove to Bowie’s beloved “Ziggy Stardust.” The gutsy, glam and sterling set was the highlight of the evening.

The concert was the culmination of the Philly Loves Bowie Week held each week since Bowie died in 2016. It was then that Doobies Bar and Club owner Patti Brett, the self-professed number one Philadelphia Bowie fan, decided to create a tribute to the star.

Brett enlisted the support of Philly DJ Robert Drake and the Philly Loves Bowie Week began in January 2017, complete with a proclamation from Mayor Jim Kenney.

Legere has conquered major stages everywhere including Lincoln Center and Carnegie Hall. She starred the movie classic “Toxic Avenger” and has appeared on every major television network. Legere invented an alternative fuel vehicle, called The Shamancycle, has released 17 albums, and produced and directed her music videos.

Her video “Marilyn Monroe,” created as companion to her major college hit record happened to catch the eye of David Bowie; Bowie was so taken by it that he asked her to open for him on his 1990 Sound + Vision Tour.

“My phone rang and this guy on the other end asks to speak with Phoebe Legere,” she said. “I said, ‘This is she,’ and he replied, ‘This is David Bowie.’  I was doubtful and nearly hung up. But it was Bowie, and he asked me to open for his tour.

“I learned so much from watching him night after night; David was a true professional in every sense of the word. He was the sort of man who would come into the holding areas before each show and offer encouragement, or have a drink once the show was over.

“Just a very nice man, and I enjoyed my time with him.”

“I’m very excited to be part of this,” said Legere. She took the stage with a cast that included Ava Cherry (who sang on Bowie’s Young Americans album in the ’70s and also toured with him), Jeffrey Gaines, Ari Rubin and Michael Baker. Legere’s incredible four-octave vocal range dazzled and her abilities as a multi-instrumentalist–accordion, piano and guitar–completely captivated the roaring and delighted crowd.

When not touring, painting or writing new material, Legere is a community activist and involved in multiple charities, one of which is her own Foundation for New American Art, whose mission is to “bring art and music to under-served children.”

“I’m doing shows every Saturday beginning in March with the Lower East Side Children’s Chorus. There is dancing and singing and I’ll be trying to give these children joy through music. I am the conductor and music director and just love it.”

Somewhere out there, David Bowie is smiling and applauding his co-legend Phoebe Legere.

For more about Legere, visit phoebelegere.com.

ALL RIGHTS GRANTED TO THEATERLIFE.com

Jared Klein is a rock writer and critic living in London. His features on musicians, concerts and art world personalities have appeared in a wide variety of publications including Stamp the Wax, Culture and Fact.