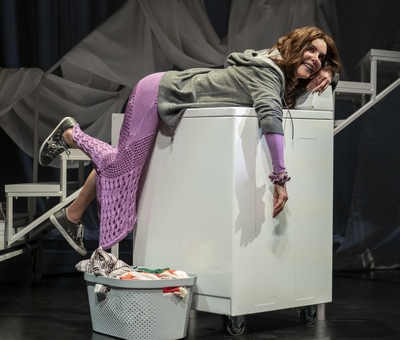 Indeed, her tale of serial monogamy begins with the washing machine she masturbated on as a child. Discovering how to turn on the spin cycle was an epiphany. Finding the right husband was more challenging. As she tells us later in the 90-minute performance piece, “good sex isn’t about what’s between your legs. It’s between your ears.”

As is her wont, Robbins’ autobiographical solo show is light hearted, and entertaining. Her ability to vehiculate in spite of obstacles, health scares, bad relationships, and nasty men make her an endearing presence, and one with whom we can readily identify.

Woven into her recollections, are recognizable patterns of abuse, such as many women talk about these days. In her case, a manipulative father who made her afraid of men, while making her feel that she could never manage without one, spurred the inner turmoil.

Still, her comedy is fueled by the men who come and go quickly, and in the play, seamlessly. From Siler, who remains chaste, to Ronald who proves himself in a way washing machines never do. Onto Edward for further explorations, before landing the Doctor who was born with one testicle, etc., etc., etc.

On the subject of herself, Robbins is obviously loquacious, but she is not narcissistic. Reflecting on her teenage years, she recalls her inner doubts, “Am I actually pretty? Somewhere inside, I don’t quite believe it,” she opines.

And while her career as an actor is extensive – playing roles in soaps, primetime television, films, and musical theater, she is also understated about her accomplishments. Her most ambitious job, she informs us, was parenting. After all her own parents were controlling puppeteers, and she was not going to be like them.

That Robbins is as lovable for her mistakes and dalliances, as she is for her loyalties and sense of commitment, makes her story fun without intimidation. She dresses simply, in lavender workout clothes, and a long sweater. They’re easy to move in when demonstrating orgasms of the washing machine-worthy variety.

And Jane Shaw’s set design creates an open, multi-tiered playing area with a sleek silver stairway, and chandeliers made from household glassware.

Director, Karen Carpenter brings out Robbins on stage ease, and charm. The actress isn’t seeped in feminism, but she gives sexual autonomy a meaningful plug.