Kurios: Cabinet of Curiosities not only channels Fellini and films such as those early Méliès Brothers cinematic fantasies, Fritz Lang’s 1927 silent masterpiece Metropolis, The Wizard of Oz,  and The Time Machine, but also draws inspiration from the Industrial and staid Victorian Ages.

“Those were times of invention and innovation,” says writer/director Michel Laprise. “There was the coming of the railroad, telegraph, electricity, recordings. Invisible energy was stimulating people’s imaginations. It was also the golden age of magic and illusionists.”

This uniquely different show is a throwback to the CduS’s extraordinary capacity to boggle our minds with beguiling artistry. One critic raved: “It’s the most enthralling, consistently over-the-top magical show Cirque du Soleil has sent our way in a long time. One that will lift your spirits to the stars.”

That was Laprise’s intent. He wanted “to evoke a Victorian carnival with a collection of sideshow entertainments with a steampunk vibe.”

An actor, director, talent scout, and artistic director, he joined Cirque in 2006 to direct and create special events. In 2012, he collaborated with Madonna on her Super Bowl XLVI halftime show and directed her MDNA tour.

With so many CduS shows open-ended in Las Vegas and internationally, the celebrity-related productions [Beatles, Michael Jackson, Elvis], and arena and theatrical creations, Laprise felt Cirque’s former uniqueness had become too familiar to even the dedicated fans. They’d come to think “I can predict what I’m going to see. I don’t need to go again.” Plus, prices for concessions and parking reached ridiculous levels [something, sadly, that hasn’t changed].

Since 2014’s Amaluna [Latin for mother and moon], the female-centric production inspired by the Bard’s Tempest and directed by Tony winner Diane Paulus, we’ve had Paramour, created especially for theater and now playing here , and the recently-departed Toruk, an arena show and sort of sequel to James Cameron’s Avatar presented in the alien language of Novi. The former, playing at the Lyric, boasts spectacular sets and exciting acrobatics; the latter, weird aliens in even weirder costumes, an incredibly off-beat score [maybe too off-beat], and stunning visuals [courtesy of 40 projectors]. It was time for a shake-up.

“We set out on a mission to reinvent ourselves,” explains Laprise. “It’s different from our other shows. The characters are real people in real clothes. The set is a laboratory someone inhabits and not an abstract, magical place. Nothing happens accidentally, so I was looking for collaborations with passion.” 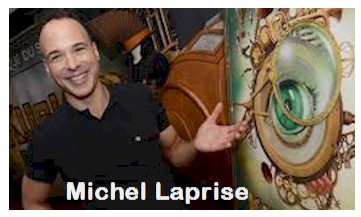 He adds, “My dream was to do a show where a character accesses a parallel world and brings poetry and imagination back to earth. I wanted people who never look at obstacles, only the destination – which is creating happiness through dazzling storytelling and the best acts we could find. Kurios… does that. It will be a huge surprise for lots of people.”

Kurios… has “benevolent but outlandish otherworldly characters who turn this world upside down with a touch of poetry and humor to ignite the Seeker’s imagination and make his mechanical curios jump to life.”

You’ll certainly see where the $30-milllion budget went. The showhas clockwork toys [some even orange]; wacky flying machines and gadgets (such as a transmitter built from the keyboard of a typewriter – whatever that is); odd and old musical instruments (such as a pianola, a towering music-maker built with glass globes, even a gramophone horn) [some explanations will be necessary to those not of a certain age]; and game-like props you’d find at an arcade or amusement park.

“It’s a tale in which time comes to a complete stop,” says Laprise, “and transports audiences inside a fantasy where everything’s possible. In this realm, set in the latter half of the 19th Century, reality is quite relative because our perception of it is utterly transformed. It’s a place where you can glimpse a hidden, invisible fantasy world by closing your eyes and trusting your imagination – a place where the craziest ideas and the grandest dreams await.”

Laprise adds that there’s also a lot of love and inclusiveness. “The planets were well-aligned during the creation period. To keep the atmosphere lighter than air, the choreographers have the company dance from sequence to sequence.” 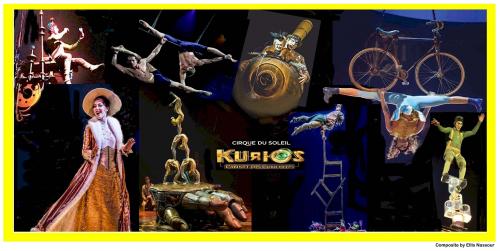