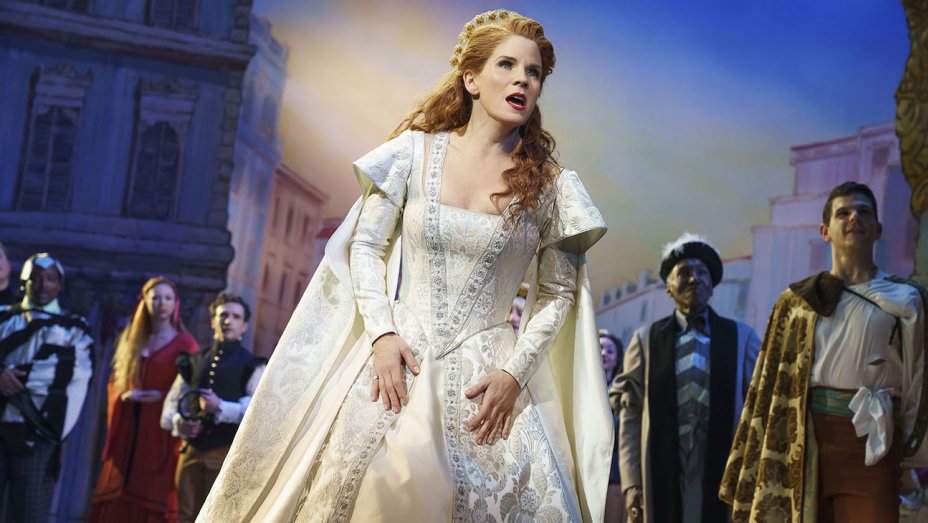 Premiering in 1948, Kate came about when writers Sam and Bella Spewack witnessed a backstage fight between the legendary acting couple Alfred Lunt and Lynn Fontanne during a performance of Shrew. The married playwrights fashioned an ingenious plot with a fictional divorced pair headlining a musical version of the Bard’s comedy during a Baltimore try-out. The battle between Katharine and Petruchio parallels that of the show’s stars Fred Graham, an egotistical actor-director-producer, and Lilli Vanessi, an equally self-centered thespian, bouncing back from a Hollywood sojourn and about to remarry a wealthy Texas oil millionaire (here, as in the 1999 revival, recast as a five-star general with presidential ambitions enacted with proper macho swagger by Terence Archie).

Following Shakespeare’s lead, Lilli ultimately subjugates her strong will to Fred just as Katherine gives in to her tamer Petruchio. This, as well as the slapstick physical abuse the female lead endures, was perceived as problematic in age of #MeToo. So Amanda Green was called in to update the more objectionable sections of the book. She receives an “Additional Material” credit in the program. Now Lilli gives as good as she gets, smacking around Fred and her final capitulation song is changed from an anthem of suppression to one of cooperation between the sexes. (“I Am Ashamed That Women Are So Simple” is now “I Am Ashamed That People Are So Simple.”) There are also jokes about gun control, if you can believe it. Similar updates have occurred with revivals of Carousel and My Fair Lady. Does these changes subvert or spoil a classic? Green’s rewrites come across as a trifle forced, but they do nothing to lessen the pure ecstatic rush a Golden Age musical like Kate provides.

After her stellar turns in The Pajama Game, South Pacific, and The King and I, O’Hara secures her crown as the queen of classic Broadway. She and Chase joust with zest and provide plenty of heat and spark. Corbin Bleu and Stephanie Styles exhibit breathtaking dance skills as the supporting secondary players Bill Calhoun and Lois Lane (no relation to Superman’s best gal), particularly in the spectacularly staged number of flirtation, “Tom, Dick, or Harry,” where Will Burton and Rick Faugno also display praiseworthy hoofing. James T. Lane and Adrienne Walker are featured to advantage in “Another Openin’” and “Too Darned Hot” as are John Pankow and Lance Coadie Williams as a pair of comic gangsters brushing up their Shakespeare. Add David Rockwell’s colorful sets and Jeff Mahshie’s gorgeous costumes, both of which create a cartoonish 1940s version of Elizabethan Padua, and you have a delightful valentine to musical comedy’s past to enjoy in the present.

Kate celebrates the eternal glory of Broadway’s yesterday while Be More Chill, now at the Lyceum after a hit run Off-Broadway earlier this season, ushers in a promising tomorrow. The basic premises of both shows are silly fun and borrow heavily from other sources. Kate is a mix of Shakespeare and traditional backstage show-biz plotlines, while Chill blenderizes teen tuner tropes from shows such as Mean Girls, Heathers, and Dear Evan Hansen, along with dash of sci-fi/horror a la Little Shop of Horror and the film Limitless. Chill has proven a cult hit with younger theatergoers who are attending multiple times.

High-school outcast Jeremy (adorably nerdy Will Roland) discovers if he ingests a black-market mini-computer in pill form, it will direct his every move on the path to popularity. Of course, his new found coolness means dumping his geeky best friend Michael (quirky George Salazar) and risking his sanity and the safety of the world as the insidious device known as a Squip (personified by sleek Jason Tam) takes over his conscience and attempts to conquer humanity. As noted, the concept, based on Ned Vizzini’s YA novel, has echoes of other shows, but Joe Tracz’s book and Joe Iconis’s score provide enough originality and zip to compensate for the familiarity. Stephen Brackett’s direction and Chase Brock’s choreography keep the action moving quickly and smartly enough to gloss over any dull patches.

Chill is not an earthshaking groundbreaker, but it is a clever hoot causing audiences under 40 to fall in love with musical theater. Not such a bad thing.