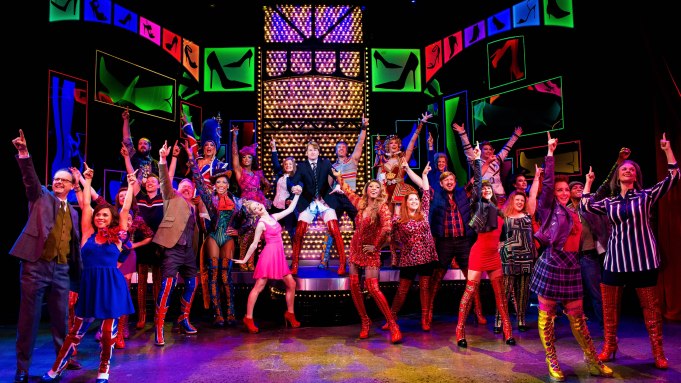 If you’re feeling a little sluggish from the oppressive summer heat and looking for something to perk you up, you’re in luck! BroadwayHD, the premier streaming platform for live theater, is debuting a captivating filmed edition of the Tony, Grammy, and Olivier Award-winning hit musical Kinky Boots, just the remedy to sluggish spirits.

Kinky Boots is from pop icon Cyndi Lauper and legendary playwright Harvey Fierstein, directed and choreographed by Tony Award-winner Jerry Mitchell and based on the film written by Geoff Deane and Tom Firth.  The debut of Kinky Boots is only the latest in a line of originally-produced filmed captures of hit shows that have arrived on the service, with the most recent being the iconic 42nd Street, which arrived on the service this past May.

Stewart F. Lane and Bonnie Comley, co-founders of BroadwayHD, Tony Award-winning producers and acclaimed filmmakers said, “Kinky Boots was a groundbreaking and innovative production from a team of some of the most brilliant minds in entertainment.  It not only deserved to be center stage on Broadway and the West End, but to also have a truly global audience.  With this original film capture, we are not only able to bring the show exclusively to our service so that it is more accessible for anyone to see, but we were also able to artfully film the West End production so that viewers at home on their couches feel like they have the best seat in the house!”

Inspired by true events, Kinky Boots tells the story of two people with nothing in common—or so they think.  Charlie (played by Olivier Award nominee Killian Donnelly) is a factory owner struggling to save his family business, and Lola (played by Matt Henry, who won an Oliver Award for the role) is a fabulous entertainer with a wildly exciting idea.  With a little compassion and a lot of understanding, this unexpected pair learn to embrace their differences and create a line of sturdy stilettos unlike any the world has ever seen! But in the end, their most sensation achievement is their friendship.

“We’re so excited for ’Kinky Boots’ fans and new audiences alike to have the opportunity to experience the joy of this special musical thanks to BroadwayHD,” said Daryl Roth and Hal Luftig, Kinky Boots’ lead producers. “Audiences will get to see our fabulous West End cast and get an unprecedented glimpse into the show’s heartwarming story. We’re so grateful to BroadwayHD for helping the important message of Kinky Boots live on forever.”

“Since the first performance of Kinky Boots, hardly a day has passed without my receiving a thank you message from someone whose spirits were raised up by the show,” Fierstein said. “Kinky Boots has been playing in big cities all over the world but now, thanks to this live capture, it will reach people a whole new audience who can watch it from the comfort of their own homes. I am beyond excited!”

Prior to arriving exclusively on BroadwayHD, Kinky Boots had a limited run in select movie theaters across the U.S. on June 25th and 29th as a special Fathom event.  In addition, BroadwayHD will be supporting the release of Kinky Boots on the service with digital and social media marketing, and other promotion.

The debut of the West End production of Kinky Boots on BroadwayHD is only one of a number of exclusive and ambitious projects co-produced by the service.  Other recent productions include 42nd Street, A Night with Janis Joplin, Ruthless: The Musical, and She Loves Me, the first ever live stream of a Broadway show which earned BroadwayHD a Guinness World Record. To learn more about BroadwayHD, visit www.broadwayhd.com.

BroadwayHD, founded in 2015 by Tony Award® winning producers Stewart F. Lane and Bonnie Comley, is the only streaming service offering premium full-length stage plays and musicals captured specifically for multi-platform viewing to theatre fans across the globe. In addition to exclusive live-streamed content of the world’s best productions, BroadwayHD offers subscribers unlimited on-demand access to a library of more than 250 theatre productions from Broadway, The West End and beyond.