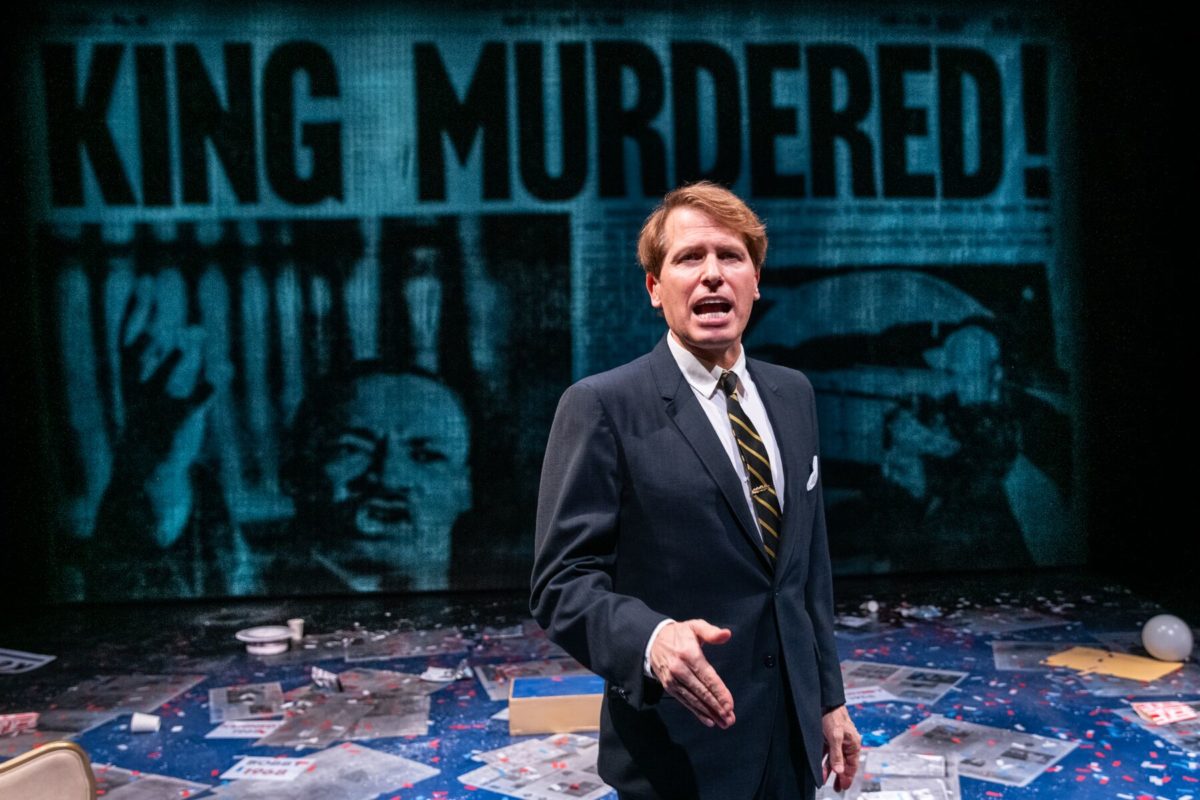 Bobby Kennedy, younger brother of Pres. John F. Kennedy, was a golden boy of 1960s liberalism. In March 1968, he threw his hat into the ring late, only half a year, in fact, before the 1968 presidential election, when the country was in turmoil because of the Vietnam War. The play documents his activities and speeches during the brief period of his fateful campaign, cut tragically short when—two months after the assassination of Dr. Martin Luther King—he was slain in the kitchen of a Los Angeles hotel.

Arrow first became interested in Kennedy after playing him in Jack Holmes’s play, RFK, first at the San Jose Stage Company and then elsewhere. He bears a rather close, physical resemblance to the man whose name now honors a major New York bridge. Those who remember RFK well, though, will find Arrow’s voice too high pitched and light, and his Massachusetts accent both inconsistent and unconvincing. This becomes even more evident when, late in the action, an audio clip of Bobby’s brother, Ted, reminds us of the notably distinct family tone and inflections.

There is an eyesore, though, in the mostly blurry projections created by Kathrine R. Mitchell. As an overview of a momentous moment, the production loses an opportunity for historical clarity by avoiding more specific images of contemporary people and events.

Kennedy frames its narrative by beginning with hints of the assassination and concludes with that horrific tragedy. Meanwhile, Bobby moves back and forth between direct address concerning what’s happening in his political and personal life, and the more memorable examples of his rhetoric while on the trail. Digital projections flash on the rear wall to inform us of times and places.

While older theatregoers and buffs of history and politics will have little trouble following the nitty gritty of late 1960s namedropping, others may stumble a bit—this is where well-chosen projections could help—identifying the players whose names we hear so often: Allard Lowenstein, George McGovern, Eugene McCarthy, Hubert Humphrey, and so on. I wonder how many millennials know who these geezers were.

The piece reminds us of the promise latent in a Robert F. Kennedy presidency, but also of the distaste and anger he provoked. Even his long hair upset some people, as if hair were somehow a subject worthy of criticizing in a potential POTUS.

Many of Kennedy’s speeches, as quoted here, attacked American policy in Vietnam, for which he said he was ready to bear his share of responsibility as a participant in his late brother’s cabinet (he was attorney general). In words it’s completely impossible to imagine coming from our current president, he quoted Sophocles: “All men make mistakes, but a good man yields when he knows his course is wrong.”

He took on many issues that continue to tear us apart: the relation of the GNP to environmental issues; mass incarceration; military expenditures on mass destruction; children’s toys that glorify violence; the quashing of dissent; American divisiveness; empty political promises; illiteracy; starving American children; our obligations to the suffering of other nations; civil rights; the rising tide of violence; health care costs; government funding for social programs; poverty; gun control, and so on. Recognize any?

When not standing at a lectern, Kennedy talks about his campaign, the endless whistle stops (bo-o-oring), his need to win primaries (Gene McCarthy was beating him), the importance of demonstrating his independence from his brother, and his support for minorities, like blacks and Native Americans. On the other hand, he’s forced to admit approving the tapping of MLK’s phone when asked to do so by J. Edgar Hoover.

There’s also the fact that he ran to unseat a sitting Democratic president, Lyndon Baines Johnson, only to learn to his amazement that LBJ subsequently decided not to run. Passing reflections on his family, including mention of his and Ethel Kennedy’s 11 kids, as well as Jackie Kennedy, abound, offering local color but nothing surprising or essential. And, throughout, we hear intimations of the danger he faces.

If conflict be the heart of theatre, there’s little of it here. Kennedy describes his campaign, offers anecdotes, gives speeches, and is killed, which we knew was coming all along. There’s no dialogue with others, no one-on-one confrontations (although he mentions shouting at his staff), and thus no drama.

Kennedy: Bobby’s Last Crusade memorializes someone who died even before he could be nominated to run against the man who would win the Republican nomination. That man, Richard M. Nixon, ended up running against Hubert Humphrey. And I think most of us know what happened next.