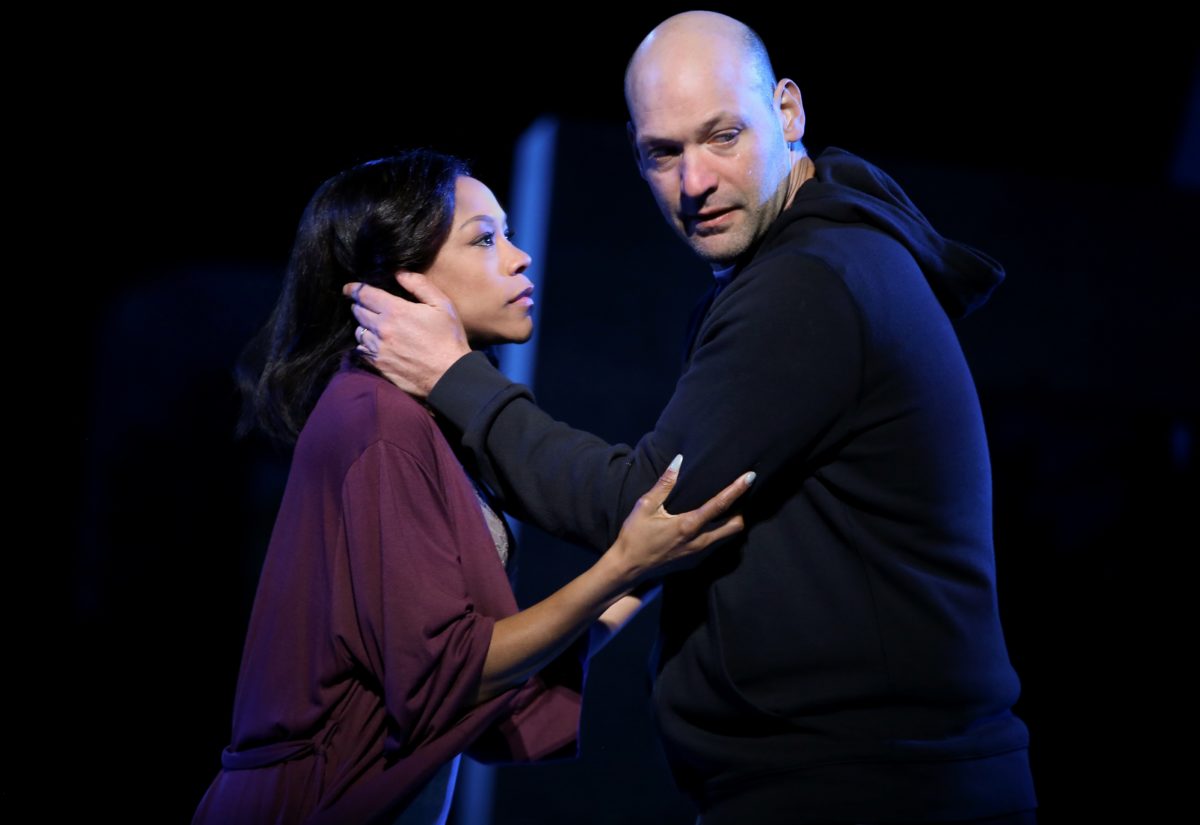 It was only a matter of time before the outsize personality of Donald Trump found its way into a Shakespearean production and Public Theater artistic director Oskar Eustis has chosen the most appropriate vehicle for our current president’s debut in verse drama: Julius Caesar. In a strikingly fluid and arresting production which spills into the aisles of the Delacorte Theatre—recreated by set designer David Rockwell as a cross between modern NYC and DC—Trump becomes the title character, a warrior returning to Rome after military victories, eager to lead and perhaps become deified by a grateful, if easily pliable populace. Marc Antony is now a woman, played by the reliable Elizabeth Marvel as Texas party operative. A huge ensemble (there must have been about 50 of them) becomes the ever-changing Roman mob, switching sides and wreaking havoc.

The first third of the play is full of easy laughs as parallels between 2017 and 44 BC are drawn. Messages are “posted” by I-phones. The gross publicans are recast as street protestors wearing either red “Make America Great” baseball caps or black Resist T-shirts. Caesar’s asides to his entourage become startlingly topical as he bids individuals to dine with him alone, just like Trump with ex-FBI director James Comey. Caesar’s wife Calpurnia is now a Melania knock-off complete with Slavic accent and expensive tastes (Paul Tazewell created the tasteful costumes.) Caesar-Trump’s bellicose proclamations of self-love sound especially familiar.

The SNL guffaws cease when the would-be dictator is assassinated, and Marc Anthony rouses the citizenry into authoritarian chaos. The forces of rebels Brutus and Cassius become underground lefties clashing with riot police. My only quarrel with this black-and-white concept is it robs the play of Shakespeare’s rich, grey-hued ambiguities. Here Caesar is an unalloyed monster and his killers are justified in their actions. Anthony is a sly manipulator rather than a loyal friend winking at Caesar’s flaws. In a more traditional reading, there are no heroes or villains, but each figure contains a bit of both.

Despite this shortcoming, Eustis has created a stirring and gripping Caesar which barrels along with a rapid two hours with no intermission. Gregg Henry is a bombastic Donald, I mean Caesar. Corey Stoll captures the earnest integrity of Brutus while John Douglas Thompson incorporates Cassius’s short-tempered pettiness as well as his passionate pride. Marvel is a cold-blooded Antony, not above stooping using Caesar’s mangled corpse for her own ends. Tina Benko’s Calpurnia and Nikki M. James’s Portia, the wives of Caesar and Brutus usually shunted the side, are fully fleshed-out creations. Edward James Hyland, Teagle F. Bougere, Yusef Bulos, and Tyler la Marr also make make valuable contributions in the huge cast.

This is probably the most political transposition of JC from ancient Rome to a contemporary setting to play on or Off-Broadway. The only other staging in my mind that might come close is Orson Welles’ 1937 Mercury Theatre edition which placed the action in a fascist-leaning Europe. (No I didn’t see it. This was way before I was born. A 2012 Guthrie Theatre production featured an Obama-like Caesar with conspirators resembling Republican leaders such as Paul Ryan and Mitch McConnell.) It’s a sad comment that we find ourselves teetering on the brink of a possible similar catastrophe and that this alarmingly relevant production has only a few performances left.

(In another sad commentary, two major corporate sponsors have pulled their funding over the depiction of a Trump-like figure being assassinated. Delta Airlines has withdrawn for all Public Theater productions and Bank of America pulled out only from Julius Caesar.)