November 23, 2022: On the heels of the international success of Six, comes another woke Elizabethan musical from the West End, & Juliet, directed by Luke Sheppard. Book writer David West Read’s tale of female empowerment does not concern Henry VIII’s many spouses (divorced, beheaded, died, divorced, beheaded, survived) but one of Shakespeare’s most famous heroines, Romeo’s one and only wife, Juliet. 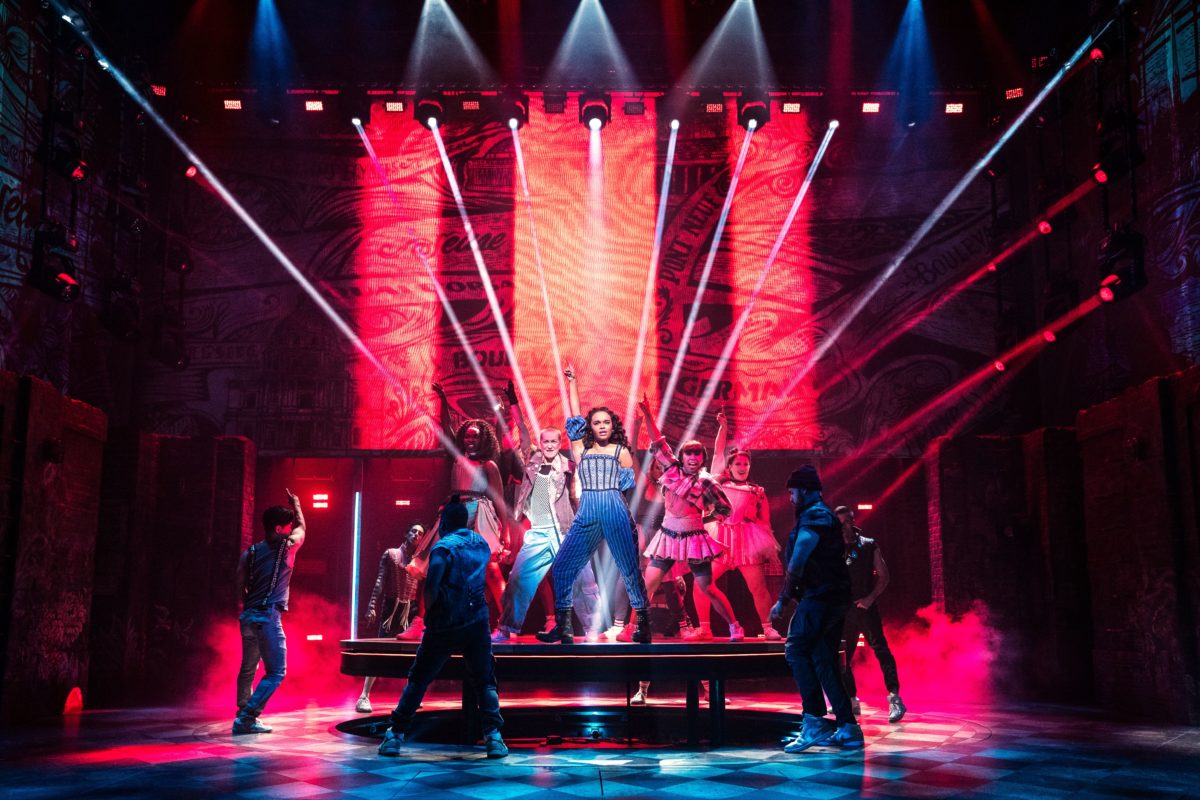 Lorna Courtney and the cast of & Juliet.

November 23, 2022: On the heels of the international success of Six, comes another woke Elizabethan musical from the West End, & Juliet, directed by Luke Sheppard. Book writer David West Read’s tale of female empowerment does not concern Henry VIII’s many spouses (divorced, beheaded, died, divorced, beheaded, survived) but one of Shakespeare’s most famous heroines, Romeo’s one and only wife, Juliet.

The other major difference is that while Six is a pop concert comprising a series of loosely connected songs performed in the style of various artists, & Juliet is a jukebox musical featuring the songs of Swedish pop songwriter Max Martin. The plot is intricate, and worthy of a Shakespearean comedy, with numerous twists and an almost happy ending.

It all begins when Shakespeare’s wife, Anne Hathaway (Betsy Wolfe), insists Shakespeare provide the tragedy with a different ending, one that features a less submissive Juliet. Shakespeare (Stark Sands) doesn’t appreciate his wife’s interference, but decides to appease her, while still maintaining ultimate control of the writing quill.

From that moment, all bets are off. Juliet (Lorna Courtney) does not kill herself, partly because she finds out she was not exactly Romeo’s one and only (“Show Me the Meaning of Being Lonely”). Instead, Juliet and her non-binary friend, May (at the show I saw, Michael Ivan Carrier Justin David Sullivan’s understudy), go to Paris, along with Juliet’s nurse, Angelique (Melanie La Barrie).

Anne has also written a new part for herself, Juliet’s friend, April, and a part for Shakespeare, who becomes the carriage driver. They set off to the strains of “Show Me Love.”

In Paris, both May and Juliet are attracted to François (Philippe Arroyo), a timid musically inclined young man whose father, Lance (Paulo Szot) has just told him he must marry or join the army. Soon it is revealed that Angelique and Lance once had a clandestine affair when Angelique was nurse to Lance’s children, and the musical has another set of lovers.

The action careens through many other hairpin turns before the show’s triumphant, confetti strewn penultimate scene and the final resolution. It would be unfair to recount them all. There is a good deal of Shakespearean references strewn throughout the dialogue, for those of a more intellectual bent, and some pretty corny puns for those of a less demanding intellect.

At times, the plot seems to serve the music rather than vice versa, but the songs are so cleverly introduced most people won’t mind, or perhaps won’t notice in their pleasure at hearing some of their favorites from times gone by. And the performers serve Martin’s catalogue extremely well, the real showstoppers belonging to the females, Courtney and Wolfe, who get huge applause for holding a note.

Soutra Gilmour’s set contributes heartily to the carnivalesque atmosphere, and also makes a smooth and clever shift from carnival London to carnival Paris. Howard Hudson’s lighting enhances the fun, if not the drama.

& Juliet is a bit of fluff that will probably hit a welcome chord for many people. But after the party’s over, there’s nothing much left but the confetti.