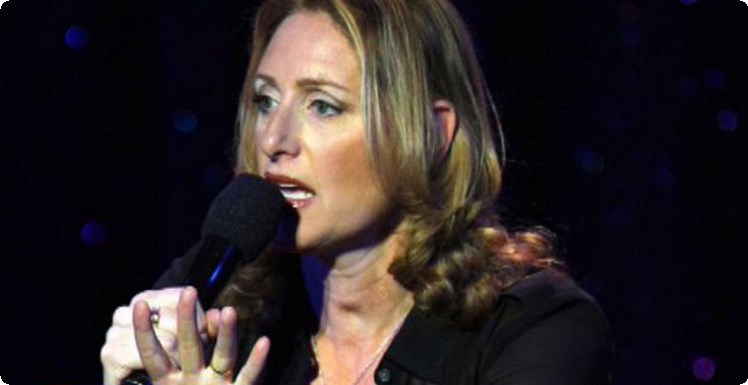 Best of all, no matter how outrageous Gold gets, we all know deep inside we feel exactly the same way. Who really looks forward to those holiday newsletter filled with tidbits about the kids’ unique achievements and the family’s amazing vacations? Do we really care about our friends’ diets? Why do mere acquaintances think they have a right to ask us for a contribution to their GoFundMe project? If by some slight chance Gold should run out of grievances, there’s always the current administration. According to Gold, we can expect a decline in the U.S. population, thanks to couples being too worried about the news to copulate. But just to show she’s not a complete heretic, Gold claims she hasn’t fixed her dog; instead she’s teaching him abstinence “in honor of Mike Pence.”

Gold saves some of her best jabs for herself, a gay Jewish woman with two kids and, apparently lots of hangups she’s working on with a therapist she calls “mommy.” Unlike Barbara Streisand who has everything, both her sons are straight, but they’re not so perfect as her therapist’s offspring. And like all Jewish mothers, Gold had her own Jewish mother, residing in a home  but still capable of irritating her daughter.

A veteran who started doing stand-up while she was in college and now has many years experience as a television producer, writer and performer (Law and Order, The Rosie O’Donnell Show), Gold has a great instinct for what’s funny and just how far she can take a joke. She certainly knows how to work an audience. Those who are singled out for special attention no doubt consider themselves extremely lucky.

West Side Comedy Club, owned by Eugene Ashe and Thomas Wilson, is the brainchild of Eugene and his wife, Nina, who met while working together at Caroline’s Comedy Club in the early 90’s. It is a spacious venue located below Ashe and Wilson’s Playa Betty’s (California-style beach food). But Gold, who is 6’3” dominates the house like a very funny Jewish Gulliver among the laughing Lilliputians.