July 29, 2021: In the late 15th century, the morality play, The Summoning of Everyman, examined salvation and determined that the only way we get to heaven is by doing good deeds. Many centuries later, producer and now playwright Bob Ulin’s Judgment Day, a comedic farce, comes to the same conclusion. 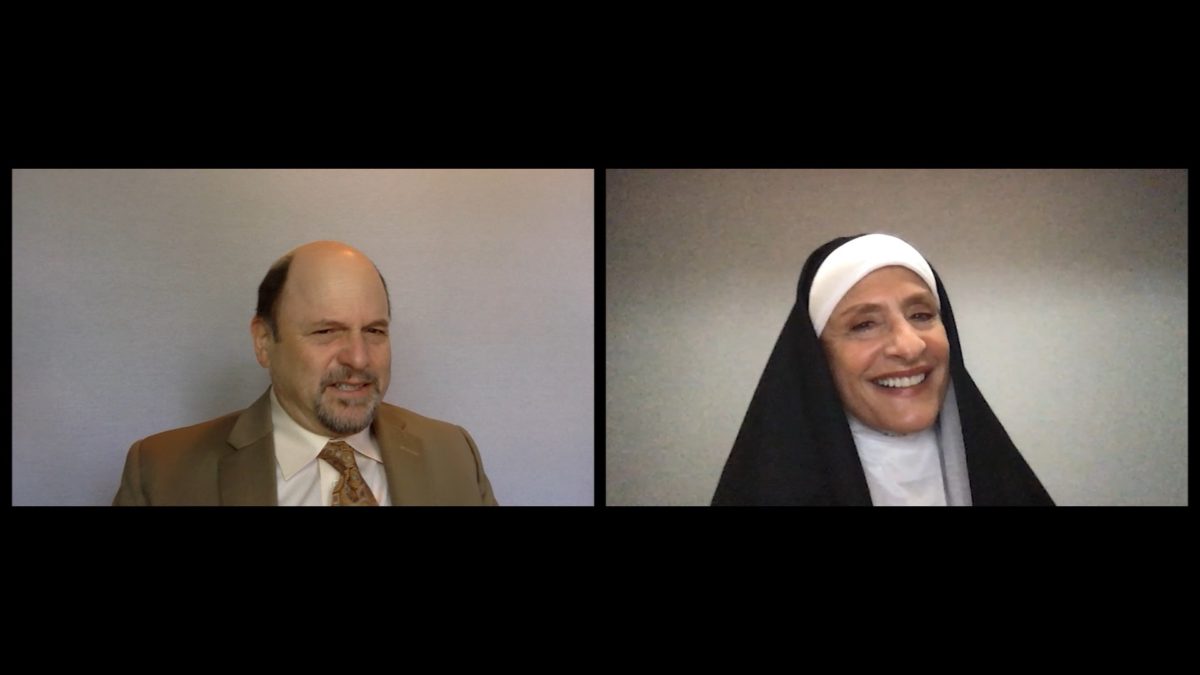 July 29, 2021: In the late 15th century, the morality play, The Summoning of Everyman, examined salvation and determined that the only way we get to heaven is by doing good deeds. Many centuries later, producer and now playwright Bob Ulin’s Judgment Day, a comedic farce, comes to the same conclusion.

Judgment Day was a big hit last summer at Barrington Stage Company. And from July 26 through August 1, the play, directed by Matthew Penn, will be streaming on Stellar as a benefit for the company.

The play’s (anti)hero is a crooked lawyer, Sammy Campo (Jason Alexander), who has just terminated a really disgusting but highly lucrative piece of business when his complacent heart stops. While he is dying, however, he meets an avenging angel (Patti LuPone in a nun’s habit). She informs him with gleeful sadism of the tortures that await him in hell, but by acting too quickly provides Sammy with a loophole that allows him to resume his life.

Sammy is now determined to avoid going to hell at all costs, and because the angel told him he will be judged by what he does and not what he believes, he sets forth on an agenda of doing good. As it turns out, avoiding heaven brings him into contact with Edna (Carol Mansell), an impoverished widow battling the life insurance company’s agent, the heartless Jackson (Michael Mastro); Father Michael (Santino Fontana) a priest questioning his faith and his vocation; Tracy (Justina Machado), the ex-wife he walked out on; and Casper (Julian Emile Lerner), the troubled son he had never met or known about before.

Although Sammy’s methods may not be conventional, they are highly successful. But his kind acts also bring about unexpected changes in those he helps and, most importantly, in Sammy himself

Virtual presentations do not work for all plays. Narration cannot compensate for the lack of action. And cute visuals do not substitute for a stage and props. But Judgment Day thrives online.

In the first place those cute drawings (Melanie Cummings) and the music between scenes (Jordan Plotner) really work. And Ulin deserves a lot of credit for writing that’s so frothy we hardly notice we’re being taught important life lessons we hear more frequently coming from the pulpit.

This kind of farce depends on overacting, and streaming highlights every emotion the actors produce. When the production boasts performers like Alexander, LuPone, Santino and Machado, we can expect fireworks. And the superb cast, under Penn’s direction, brings the characters to life so vividly that after we’ve finished laughing, we just may find that we have also been seriously moved.

Judgment Day streams from July 26 through August 1. Tickets are $11.99 and are available at StellarTickets.com.