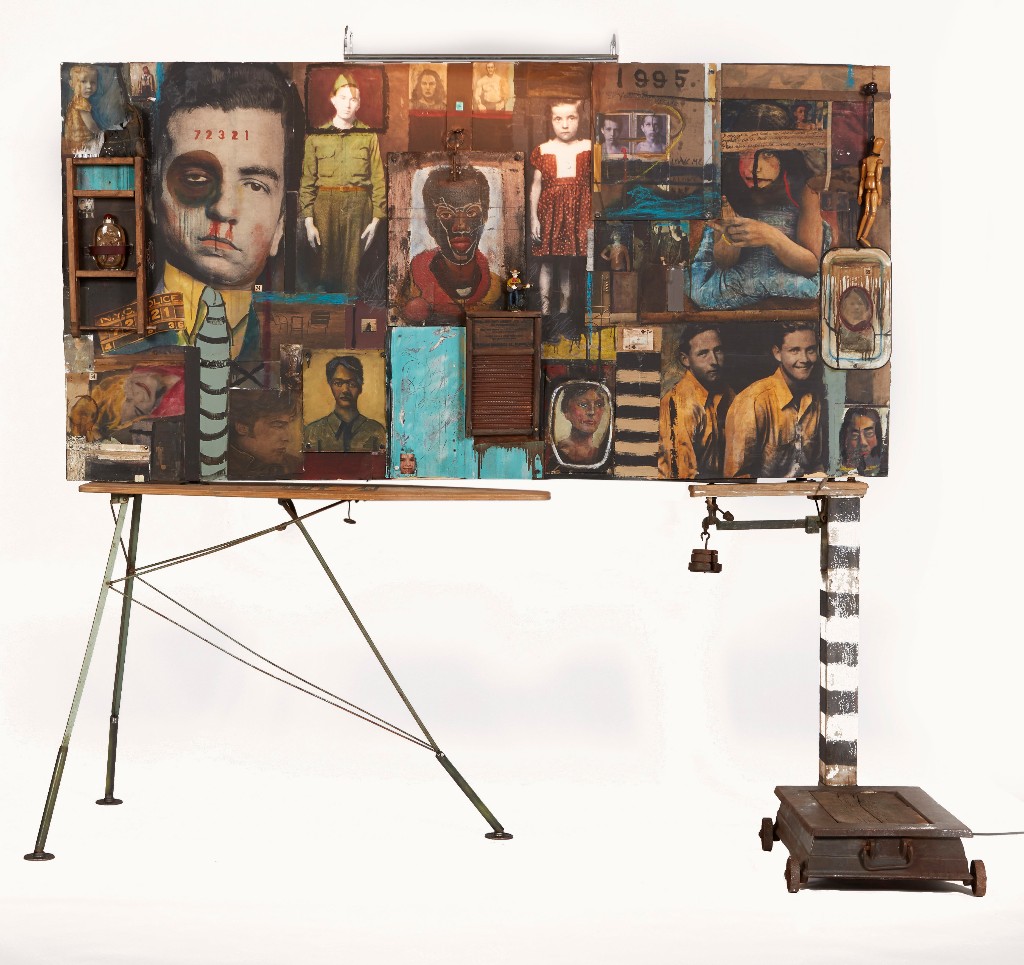 Heavily influenced by the German Expressionists, such as Otto Dix and Max Beckmann, whose anguish over human brutality and corruption speaks to his deep feelings about social justice. The artist’s imagery takes its inspiration from the same sources as his music: the oppressive authority and social struggles of the working man and woman. However, through that German foundation, the evolved result is decidedly American, with the brash ands snappy visuals rhythms of our streets, lives, politics, and passions. This can be seen in Black on Black, 2017, which repurposes text from iconic American literature and film, including The Fugitive Kind, directed by Sidney Lumet, Cool Hand Luke, directed by Stuart Rosenberg, and Tortilla Flat, written by John Steinbeck. An exhibition highlight is A Bed of Nails, 2017, a dimly-rendered portrait of American actor James Dean, the canvas embedded with a grid of nails with a line of wire surrounding the nails to frame the subject’s face. Widely credited with influencing the development of rock and roll music, Dean – like Mellencamp – was born in Indiana and remains an iconic counter-cultural figure. “Mellencamp paints handsomely grotesque portraits in oil that are as solemn and stirring as his hit songs are catchy and inspirational — depicting existential scenes and human beings ridden with the angst of the everyday” Another highlight is Jack of Hearts, a large-scale assemblage depicting the Marlboro Man, common in tobacco advertising campaigns the latter half of the Twentieth Century. Often rendered as a rugged cowboy in nature with a lit cigarette, the figure quickly became an iconic representation of masculinity and the American heartland, as well as an important trope within art history. A thick shadow at the top of the painting suggests the brim of the figure’s cowboy hat, on which sits four packs of American Spirit cases – and the LIFE Magazine logo, while in the bottom corner of the painting sits a jack of hearts from a deck of playing cards.

Mellencamp, a member of the Rock and Roll Hall of Fame and Grammy winner, is also an acclaimed singer, songwriter and musician, as well as an accomplished painter and long-time activist. Influenced by his mother, also an artist, Mellencamp began painting at an early age. As his music career flourished, he began to paint earnestly in the 1980’s with an affinity for portraiture influenced by the works of Otto Dix and Max Beckmann.

ACA GALLERIES American Contemporary Art Gallery (ACA) was established in 1932 by Herman Baron. Artists Stuart Davis, Yasuo Kuniyoshi and Adolf Dehn were early members. At the time, ACA was one of only three galleries in New York primarily dedicated to exhibiting the work of American artists. For over 80 years, ACA has supported artists in diverse disciplines with singular points of view. The gallery has presented over 800 exhibitions and published over 400 books and catalogues. ACA continues its tradition of featuring artists whose talent transcends their nationality, race or gender by presenting monthly exhibitions, organizing traveling exhibitions, both nationally and internationally, and working closely with museums and private collectors to build collections. Today ACA continues to break new ground by representing and exhibiting distinguished artists and estates. The artistic and humanitarian mission of the gallery still endures, and ACA is committed to upholding this tradition by continuing to support artists from around the world in their commitment to make significant and brave contributions to the field. www.acagalleries.com | @acagalleries1932