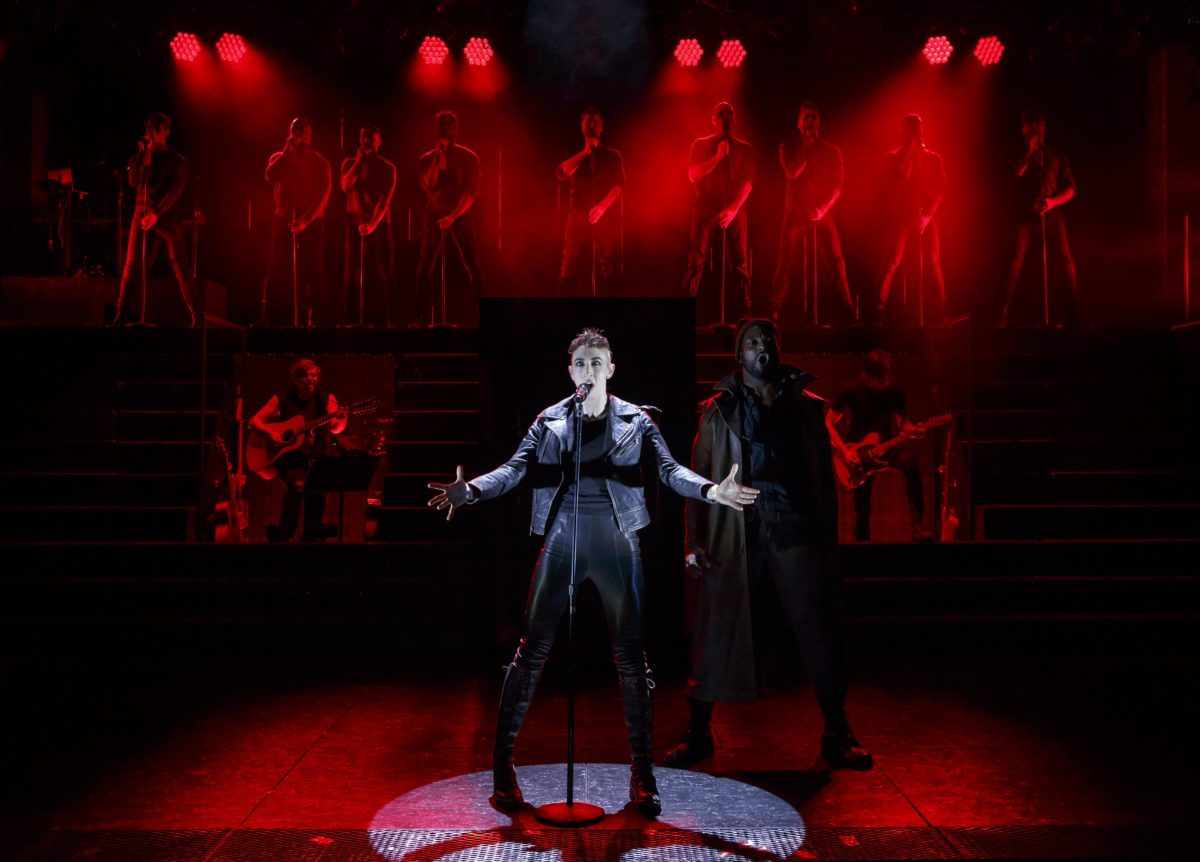 Jo Lampert in “Joan of Arc: Into The Fire”

His collaborator, Alex Timbers, who directed the musical about Marcos, brings his brand of radical, fantastical, and in-your-face theater, to this contemporary musical about the allusive Saint Joan. Add to this Stephen Hoggett’s bold choreography, and you know, you’re Into The Fire.

Playing Joan of Arc, Jo Lampert, a performer, and lead singer for the band tUnE-yArDs, is astonishing. Capturing the zeitgeist with gender fluidity. Lampert is the stunning creator of her own being. Her on-stage transformation from a feminine young woman to a warrior in a black motorcycle jacket, dancing with a sword, is an intense kind of psychological surgery. Iggy Pop-thin, tall, and lithe, she delivers an arresting physical performance, while snaring us with a voice that ranges from pure and boyish to piercing and ardent.

Essentially, the show is a sung through rock musical, ranging in style from blasting electronic feedback to the sweetest of ballads, such as “Send her to Heaven,” sung by Joan’s mother (Mare Winningham) twenty four years after her daughter was burned at the stake. With the exception of Joan and her mother, all of the actors on the stage are men, so the production resonates with a powerful masculinity that is brutish at times.

That Joan was canonized more than 500 years after being killed by the country she fought to protect, speaks to the enduring nature of the mythology that surrounds her. That she was fierce, and rejected the gender that inhibited that, is one reason to reclaim her today. That she was a patriotic freedom fighter, who waged war to liberate the villages in her native France, makes her an icon we can look to, in this tough political time. (After all, were it not for the many, many Americans who raised their voices to protect us from the repeal of Obamacare, we would have lost it.) That Joan was martyred by both church and state, to hide their lies is, yet again, a sad contemporary sort of antidote.

This is a stylish production, indeed, with ingenious costumes by Clint Ramos, who has draped the soldiers in cloaks that bear the British flag on one side and the fleur de lys on the other. Men, fighting themselves, is a powerful image here, as are Darrel Maloney’s projections, which open the show, swinging back in time at high speed, from today to the Middle Ages. It happens so quickly, it’s as if nothing has changed.