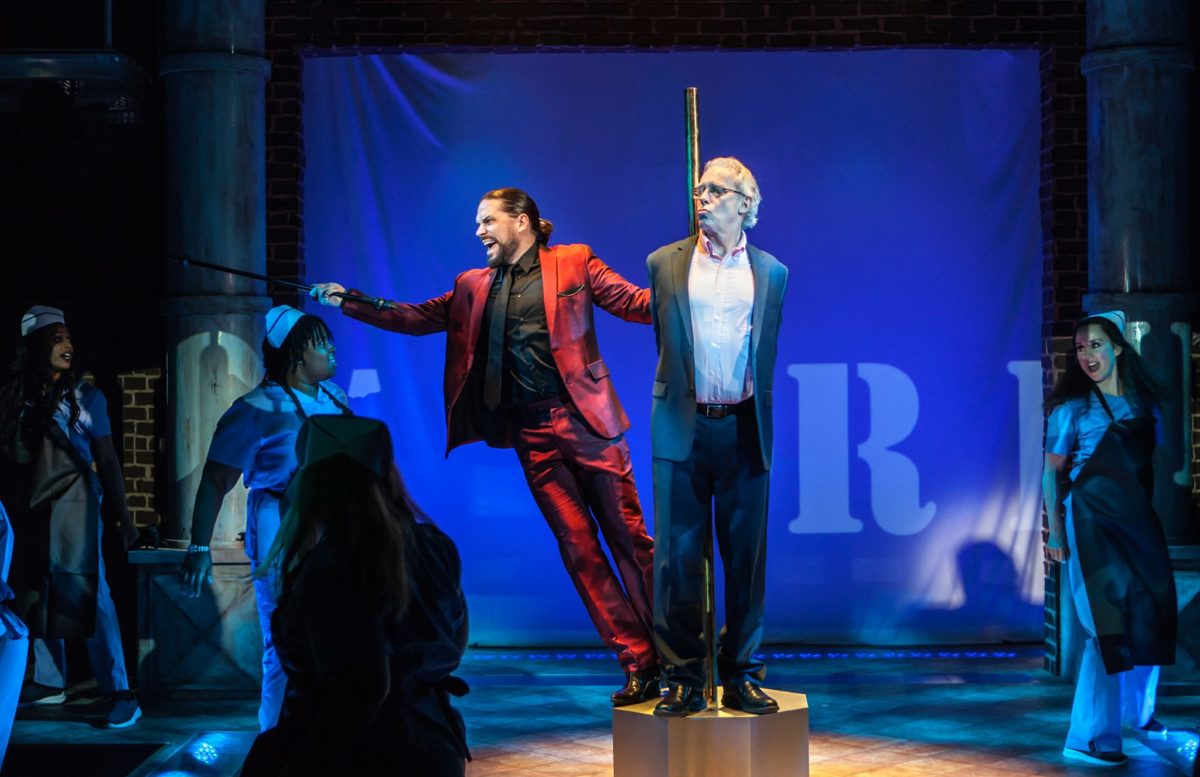 “Pimps, perverts, and scum,” along with “the misguided and dispossessed,” populate this musical version of Jerry Springer’s television talk show. Here they share their “dirty secrets” with the audience, and the world.

Among them, Montel (Justin Keyes), steps from the audience onto the stage. Confiding to his wife that he wants to be her baby, he strips down to a large baby diaper wrapped around his well-buffed body. With his outspoken toilet humor, awesome six-pack, and mellifluous voice, Keyes makes for an eye-popping presence.

As difficult as it is to watch this garish behavior, it’s also a huge release – a kind of escapism. Maybe that is why “we eat, excrete and watch TV,” as the show’s authors, the British duo Stewart Lee and Richard Thomas, opine. And if it’s not just TV, or reality TV in particular, that they’re mocking. It’s all of us, the way we eat it up the buzz, and spit it back, obsessing over every tweet and text.

Here, the characters run amuck at this opportunity for self-expression. Along with Montel, we meet a skinny tranny, Tremont played by (Sean Patrick Doyle), who’s having an adulterous affair with Dwight (Luke Grooms). Doyle’s physical appearance is arresting, especially paired with the robust Grooms. But the latter also fills the hall, with his operatic voice.

Still, the show stopping numbers go to Tiffany Mann as the broad and rather large characters of Shantel and Eve. Her “talk to the ass,” in a high soprano, is a knock out. And her freakish behavior is racially confronting.

In the central role, Terrance Mann, makes Jerry look like a normal, sane, even intelligent adult. Which is odd, given his obsession with the dirty secrets of America’s “white trash.”

Regardless, Will Swenson is dynamite as the Warm-Up Man, a Satan of sorts, who shakes up the audience, and Springer, with his performance antics. It’s a great role for Swenson who brings a large baritone voice, and strong physical presence to the role. Audiences who saw his Javert (Les Miserables) will see the villain sneak out once again.

A satire about the media freak show that is going on in our country, the musical ends with the shot and wounded Springer calling out for growing up, putting pants on, and tighter gun control.