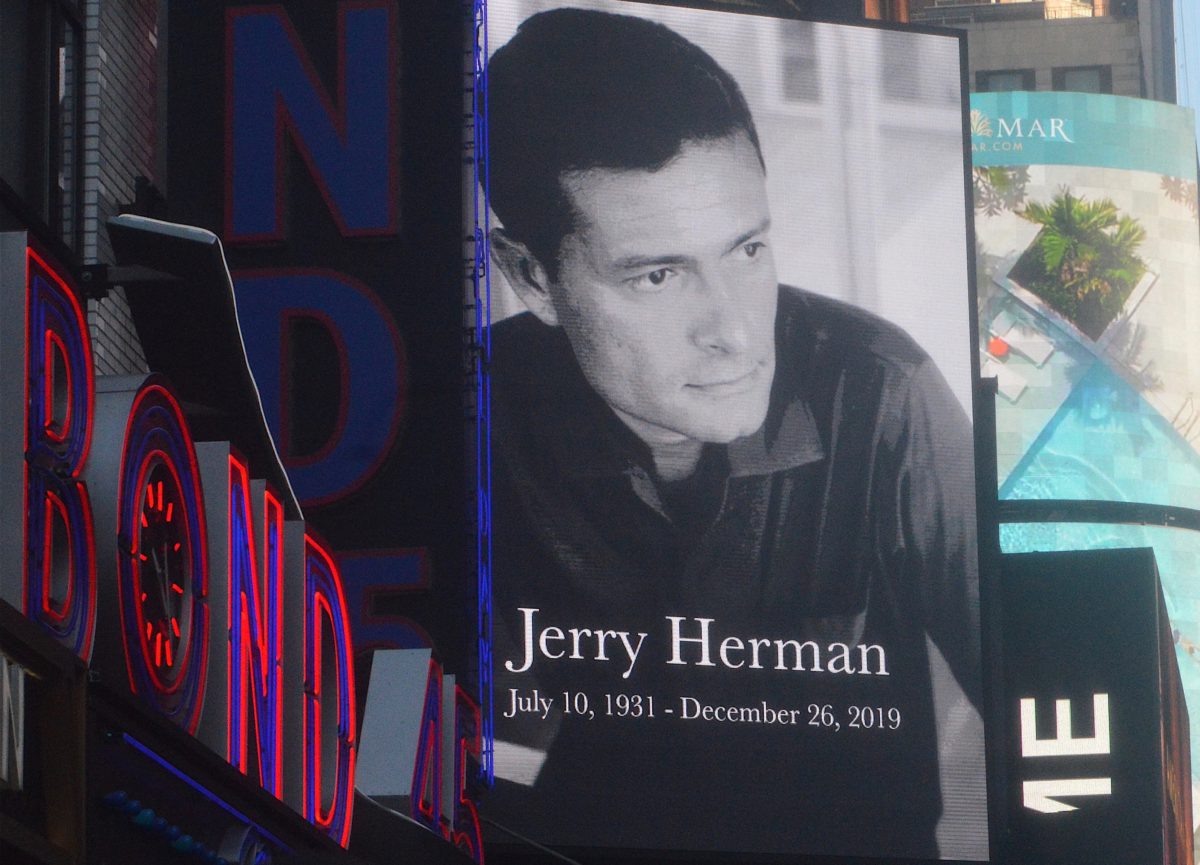 When musical legendary Jerry Herman left us on December 26th at the age of 88, he left behind a plethora of beautiful musical memories from the Broadway Shows he wrote through his career, The likes of HELLO DOLLY, MAME, LA CAGE  AUX FOLLES, his hits, plus beautiful songs from those not hits, GRAND TOUR, MILK AND HONEY,  DEAR WORLD, A DAY IN THE LIFE IN HOLLYWOOD and MACK AND MABEL  (incidentally it is going to be one of the “Encores” shows in March.)

On Monday, February 3rd, his life was celebrated at the Lunt Fontanne Theatre in front of an invited SRO audience of his friends and those who worked on his shows, it was an all star audience as well as who was presented his works on the stage.

We saw a slide show of his life growing up and of his theatre career. There were scenes from shows with a parade of some of his Dolly’s.  Not too much talk, Jane Dorian his god daughter spoke of him and her mother Anita Dorian, his best friend Alice Bordon and Harvey Fierstein talked of his getting to work with Herman in LA CAGE bringing us and himself into tears.  On film was Dame Angela Lansbury and Sir’s  Paul McCarthy.  The rest was song.

Larry Blank who is a protege of Don Pippin opened and was musical director of an approximately 29 piece Orchestra.   Don Pippin who conducted many a Broadway show and MAME conducted the overture from MAME.

What we got to hear was:

Jeremy Jordan – “It Only Takes A Moment”

Debbie Gravitte – “Wherever He Ain’t”

Kristen Chenoweth – “If He Walked Into My Life”

Jason Graae – “You I Like” along with his clarinet

John Bolton (with ensemble) – “It Takes a Women”

Kelli O’Hara (with ensemble) – “Before the Parade Passes By”

Lee Roy Reams – “The Best of Times” which the cast joined  in and so did the audience.

It was an afternoon of 11’o clock numbers one after another.

I know Jerry Herman was smiling down on this Monday afternoon.