September 14, 2022: As my plus-one and I walked down Forty-Second Street after seeing Jasper,Grant MacDermott’s wannabe tearjerker at the Pershing Square Signature Center, I was sharing my opinion (meh) when a stranger, overhearing, interrupted to object because she had been so absorbed and moved by the play. For each of my objections she had a defense. I say this because I’m aware that the potential poignancy of the play’s premise might equally have affected others who will disagree with me. 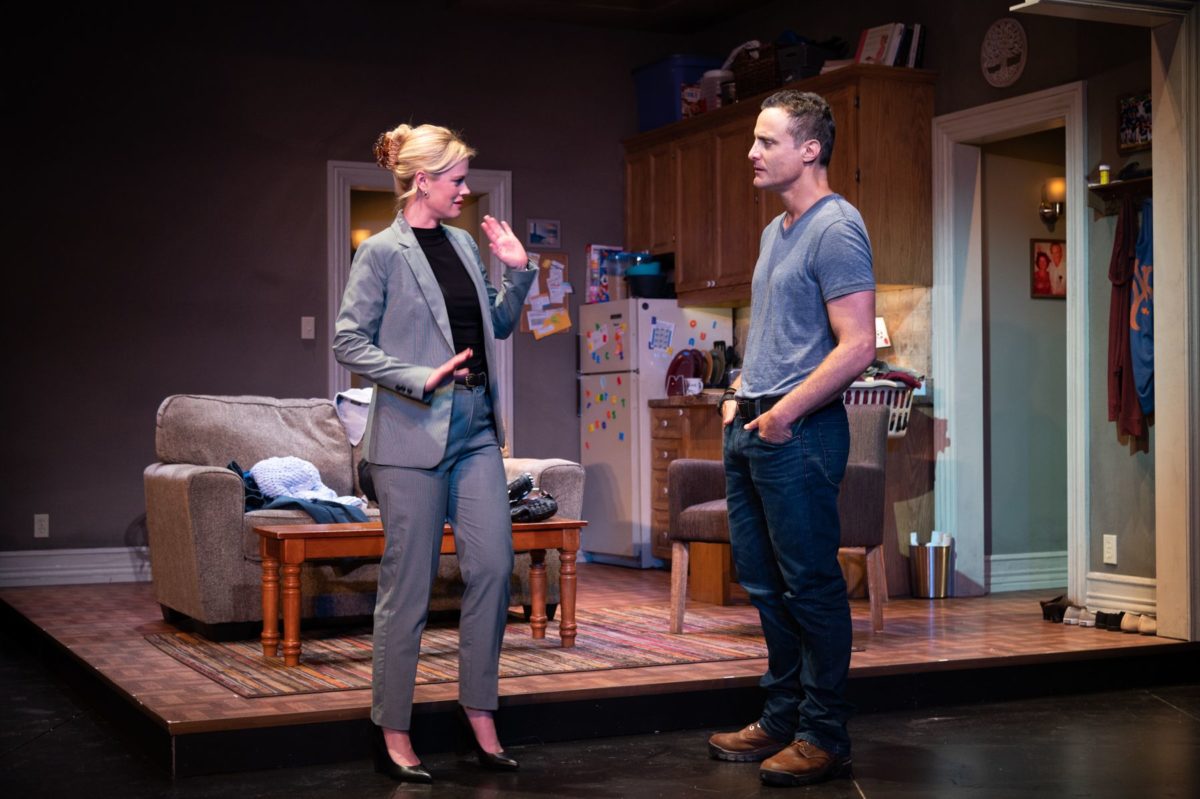 September 14, 2022: As my plus-one and I walked down Forty-Second Street after seeing Jasper,Grant MacDermott’s wannabe tearjerker at the Pershing Square Signature Center, I was sharing my opinion (meh) when a stranger, overhearing, interrupted to object because she had been so absorbed and moved by the play. For each of my objections she had a defense. I say this because I’m aware that the potential poignancy of the play’s premise might equally have affected others who will disagree with me.

Jasper, a product of the Yonder Window Company,is about a working-class couple, Drew (Dominic Fumusa, “Nurse Jackie”), a construction worker, and Andrea (Jessica Pimentel, “Orange Is the New Black”), who works in senior daycare, with a seriously disabled son (unseen). He, the title character, is confined to bed in an offstage room, hooked up to machines, unable to communicate for his eight years, and getting worse.  Despite Drew’s abiding love for Jasper, the strain is getting to him, putting stress on the marriage. Andrea, however, refuses to show weakness, and consistently stands by her boy, insisting the doctors don’t know everything. Those familiar with Peter Nichols’s 1967 play, A Day in the Death of Joe Egg, will quickly see its resemblance to this setup.

The opening scene, in Drew and Andrea’s sloppy living room-kitchen, shows both the couple’s deep affection, with ripples of humor, and the cracks beginning to threaten it. The scene shifts to a subway car where the nice-looking Drew, in jeans, work boots, t-shirt, and sweat shirt, meets cute (in a totally unbelievable way) with a striking, fashionably dressed Shayla (Abigail Hawk, “Blue Bloods”), accompanied by her four-year-old boy (unseen), Tyler, in a stroller. Uh, oh, you instantly think.

But you also realize how Shayla’s presence, as cast and costumed, suddenly shifts the play’s tone from kitchen sink realism to soapy contrivance. Shayla is the kind of high-gloss stunner any hetero (and probably many non-heteros) wouldn’t be able to keep their eyes off (I’ve never seen anyone remotely like her on the A train). Your natural inclination would be to instantly believe—regardless of their apparent class/style differences—that an affair is in the offing, Drew’s real interest, however, is in Shayla’s son, Tyler, so different than his own, even though he obviously makes Shayla palpitate. This becomes increasingly apparent when Drew again meets Shayla—dressed, as usual, like a partner in Waystar Royco or Hamlin, Hamlin, and McGill—in a park. Who doesn’t take their kid to a playground in Gucci (or whatever) and heels? How this meeting has come about is not explained.

The divorced Shayla, obviously attracted to him, knows he’s married, but Drew has fibbed about not having a child. It’s always those little lies that get you. Despite the obvious chemistry between them, Drew makes no overt moves on Shayla, whose child is gradually becoming his surrogate son. However, in his desperation to fulfill his paternal needs, even with another woman’s boy—the play’s central point—he spends more time away from home than usual, fumfering when asked by Andrea where he’s been. Eventually, Andrea catches on—the smell of laundry plays a big role—but the affair that’s not an affair still comes piled with guilt. How these complications work themselves out is the object of this clumsy domestic drama, which veers from authentic sincerity to egregious implausibility within the space of a heartbeat.

Jasper uses a set by Michael Gianfrancesco, efficiently lit by Robert A. Patterson, that fills one half of the stage with a nondescript gray room. The upstage wall is kept noticeably bare of any décor because it has to serve as a scrim for when Jasper has an episode we see lit in silhouette. The walls are bordered in thick, white, crown molding, which seems out of place in this otherwise unadorned, shabbily furnished space. The area downstage of the room serves as the architecturally vague, wall-less entryway. The other half of the stage is open, serving as both park and hospital room, while the subway scenes use a simple unit pushed on and off at one side. Mr. Gianfrancesco’s costumes for Drew and Andrea are everyday clothes, but Shayla’s stylish, if business-oriented, clothes, especially a gorgeous beige coat she wears on the train, seem more runway than subway.

Katie McHugh’s direction does little to make the play more than sporadically convincing. Mr. Fumusa and Ms. Pimentel, sometimes so quietly naturalistic they muffle their words, are solid actors who bring conviction to their scenes, but Ms. Hawk, from the moment she first appears, simply seems to have dropped in from planet Hollywood. Perhaps if her Shayla were more ordinarily attractive and well-dressed in a more ordinary way, she’d make a less distracting third wheel.

As a sidebar, I was happy to see Mr. Fumusa handling a baseball glove and ball because it reminded me of his most unforgettable episode on “Nurse Jackie,” when he steps into a batting cage and knocks out one line drive after another. That put him in my good book forever. I just wish he had as good an eye for plays as he does for fastballs.