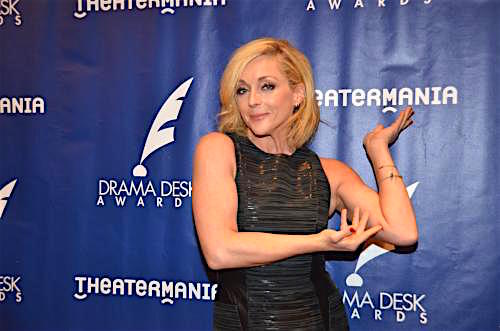 Jane Krakowski (She Loves Me, Nine, “Unbreakable Kimmy Schmidt“) and Tituss Burgess (The Little Mermaid, Guys and Dolls, “Unbreakable Kimmy Schmidt”) will announce the nominations for the 63rd Annual Drama Desk Awards on Thursday, April 26, 2018 at 10:00am at Feinstein’s/54 Below (254 W. 54th Street), it was announced today by Charles Wright, Drama Desk Presidentand Gretchen Shugart, President of Arts and Culture of AudienceView, parent company of TheaterMania.com.

The nominations announcement news conference and the awards show will be live-streamed on www.TheaterMania.com.

“What an honor to have Jane Krakowski and Tituss Burgess announce this year’s Drama Desk Nominations,” said Gretchen Shugart. “With their unique theatrical backgrounds, we are so pleased that they will be on hand to celebrate the New York theater community. We invite the industry and public to watch the nominations on Theatermania.com‘s live webcast from Feinstein’s/54 Below.”

The 63rd Annual Drama Desk Awards, hosted by Michael Urie, will be held at The Town Hall (123 W. 43rd Street) on Sunday, June 3. Tickets are now on sale at www.DramaDeskAwards.com

The Drama Desk Awards, which are presented annually, honor outstanding achievement by professional theater artists on Broadway, Off-Broadway, and Off-Off Broadway. What sets the Drama Desk Awards apart is that they are voted on and bestowed by theater critics, journalists, editors, publishers, and broadcasters covering theater.

For the seventh consecutive year, TheaterMania will present the awards ceremony and Joey Parnes Productions will produce and manage the show. Shugart is Managing Executive Producer of the Drama Desk Awards. The Awards show will be written by Bill Rosenfield (46 Beacon, True Fans, Sunshine and Shadow),anddirected by Mark Waldrop (Not That Jewish, Howard Crabtree’s When Pigs Fly, Bea Arthur on Broadway: Just Between Friends).

The 63rd Annual Drama Desk Awards will be sponsored by Chase and Hudson Scenic Studio. More sponsors will be announced in the coming weeks.