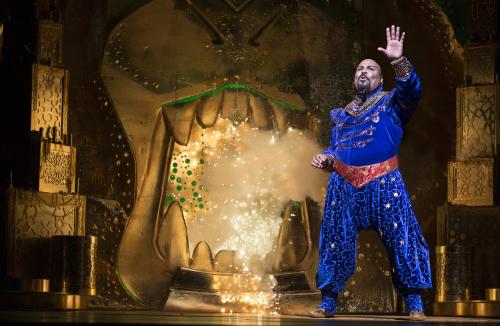 Is there anything he can’t do? James Monroe Iglehart makes magic eight times each week as Genie in Broadway’s Aladdin, but his talent doesn’t end there. This Fall alone, the multi-faceted entertainer was honing rapping and rhyming with Freestyle Love Supreme (with whom he just performed in two sold out shows at Gramercy Theatre), and will be bringing down the house at 54 Below with his powerful lungs and quixotic energy in four cabaret shows (November 7 and 14 at 7pm and 9:30pm). Even when he’s off stage the Genie is making people laugh; the regular Instagrammer and Tweeter chronicles everything from trips to Disneyland Paris and London’s Aladdin, to his ventures through Manhattan as a Marvel comics fan. Iglehart is even lending his voice to the Disney Channel’s new animated series, Tangled. The self-proclaimed little kid in a big, fun-loving body, spoke with Theaterlife about the many hats that he wears, and why there is no chance of him slowing down. 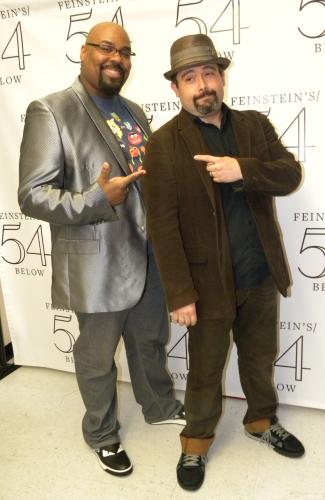 Brian Gonzales, also starring in Aladdin, helped Iglehart with a few duets when 54 Below celebrated The Muppets this summer.
Photo: Iris Wiener

Theaterlife: Performing in Aladdin eight times each week is a difficult feat, as it is for any Broadway performer. Why do you take on so many extra projects?

James Monroe Iglehart: I love doing it, and I’m also a workaholic! “People always tell you”, Performing is a journey, there is no destination, but every actor is always looking for some destination! Because of that they will do everything to see what will work and what will stick. What I’m learning is it’s not about where you’re hitting, it’s about the work you’re doing. I know that sounds cliché and hokey, but it’s the truth. Have I reached what I want to reach? No, and I think I won’t until I’m dead, and by that time I’ll be dead so I won’t care (laughs). I keep doing as much as I can and trying to have fun while I’m doing it. 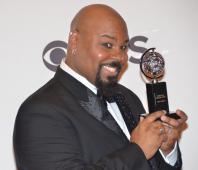 TL: It’s clear to all of your audiences that you’re still having a great time as Aladdin’s Genie.

JMI: I am having the best time ever. I still lose myself up there, I love it. This is all I ever wanted to do, so yeah, I’m having a great time.

TL: How do you keep Aladdin and the Genie fresh after almost three years?

JMI: I know the audience is going to be different every night, so I want them to have the best show possible. Plus, Genie is my favorite character, so I don’t ever want anyone to not have fun while they’re watching him. I also have an ego. I wouldn’t want anyone to think, “Wow, James didn’t perform his butt off tonight!” So I try my best to kill it every chance I get. There was this old movie called Krush Groove starring Run DMC, and I remember Run looks at DMC and says, “Yo, man. We gotta do what we can because this stuff can all end tomorrow.” I think I was 11 years old when I heard that, and I was like, “That’s true.” This can end tomorrow, so I may as well have as much fun and do as much as I can, because you never know when it’s going to end and people aren’t going to care. This is show business. I also try to be real, because this business is full of fake people. I try to be a normal guy so that when I meet kids I can say, “I’m just a regular dude with a job, I just happened to get lucky, and I’m having a good time. If you work your butt off, then hopefully you’ll get lucky and you can have fun too.”

TL: Which of your many “hats” most closely encompasses your personality?

JMI: The sad part is that all of them really do. I love singing, dancing and acting, so in musical theater I get to be that part of myself. Genie allows me to be the kid I love to be – I still get to be the little kid who goes to recess. Doing “Friend Like Me” is like having recess every day. Voiceovers allow me to say all of the stupid things I have in my head, and no one can look at me. I can just be silly. Only my wife and a couple of my best friends can see me that stupid. Freestyle rapping is just a way of letting go. There is no script, and it is the most freeing thing because I don’t have to think, and whatever comes to my head just goes. It’s solely freeform and I love that, because if you get me on a tangent I can go for hours on the stupidest things. All of that encompasses different parts of my personality.

JMI: It’s a little nerve-wracking because you hope you know what the subject is about. Sometimes we’ve done the show and we’ve gotten words and I’ve been like, “What does that word mean?” Thankfully, there’s always somebody in the group who knows what the word means so that one of us can go rap on that. It’s a fun thing to do, especially as a kid. It’s kind of like doing magic in front of people. They watch it happen before their eyes, and they’re like, “Oh my god, you’re really doing that in front me.” They’re looking for the wires, they can’t see them. It also keeps my brain working because it’s a fun exercise. I do it when nobody’s around. I’ll look in the paper and just start picking words and rapping to see what I can do. That’s how I practice.

TL: What can people expect to see at your upcoming cabaret show, How the Heck Did I Get Here?

JMI: It’s kind of a biography about how I went from a little kid to Broadway Genie. It goes through my history of my love for performing. I used to love the show Behind the Music on VH1, and I would think, “One of these days they’re going to do a show about me.” Finally I decided I’m not going to wait for them; I’m going to do it by myself! I knew I had to do a concert about something I know, so I made it funny because I had a fun, silly childhood. I tell the story through the different music of my life: my first solo at church, my first solo at school, when I wanted to become a rapper, songs that I used to sing to girls in high school that I thought were cute, all the way up to my first musical theater moment in college,to Memphis and Genie. It also goes through different styles of music, because if you were to look at my iPod, you would see that it’s all over the place. My wife likes to tease me. She’s like, “I don’t know how you have so many genres in your head.” I could literally go from The Beatles to The Carpenters, to DMX, all the way back to Showboat. My iPod says I’m schizophrenic.

TL: You have definitely let people in on your interests and personality through your many posts on Twitter and Instagram. Everyone knows how you geek out over Batman and the Muppets, among other things. How has social media changed your career?

JMI: I think social media has just given those of us who have a lot in our heads a place to say things. Some people use social media as a way to get on a soapbox and talk, but I don’t. For me, it’s just fun. The minute I found out what Twitter was, it became a place for me to say funny things and let fans get to know me. It also lets me say something that might brighten a person’s day. I like uplifting things; I don’t like all the negativity. I try to keep it light and fun, because that’s how I like to live my life. Even in the midst of all the craziness, I try to make sure that I see the light side of it; if you only see the darkness you won’t be able to get out of it. That’s not how I am.

TL: Your fans are dying to know about your character on the new Tangled series, Tangled: Before Ever After!

JMI: His name is Lance Strongbow. He’s a mysterious character who actually becomes a friend to the rest of the characters. I get to use every part of my voice for it. The adventures that Rapunzel, Flynn Rider and Pascal go through with my character and some brand new characters (played by Eden Espinoza and Jeremy Jordan) are going to be so much fun. I love animation and cartoons, but usually I’m not big into the princess stuff. However, I’m telling you, Tangled is fun! I have read the scripts and I can’t wait to see what each episode is like. It’s not because I’m doing it or I’m a part of it. I think fans that aren’t big on the Tangled movie will enjoy the cartoon because it’s such a fun adventure about all of the things Rapunzel goes through.

TL: The last time we spoke you had said that the superhero movie you would most like to see made would be Condorman. Are you going to make that happen?

JMI: (Laughs) Oh, that projectis very dormant. Nothing’s happening with it, it’s literally just in my head! What I would love to do, and I know I never can do, is do a remake of the movie. I love Condorman so much! My friends and I have sat in rooms and discussed how we would redo it to make it up to date. It would still have to be silly because Condorman is such a silly movie. That’s the problem. Would people take a silly comic book character, especially nowadays when all of the comic books have such serious issues, and enjoy a comical character? I watch the movie frequently. Condorman makes me smile. It’s a terrible movie, and I love it. I could pitch it as much as I want, no one’s taking it!

TL: What would Genie tell you he has learned about himself over the past three years?

JMI: I think Genie would say, “I watched you grow in confidence and in strength. I watched you grow in your faith in yourself.” After doing the show so much with all of the different things that happen, I find that I feel a lot more confident when I step into a room or when I get on a stage. I have more faith in myself while doing something that I used to perceive as too big a job for me. Now I go, “No, I can handle it.” Even if I don’t quite know what it’s about, now I feel like I’m brave enough to step into something new to try it and have fun. I can see Genie looking at me and saying, “Hey kid, you got this, don’t worry about a thing. You’ve grown, you’ve gotten braver, you’ve gotten stronger, you’ve gotten better. Do your thing, man. I got your back.” 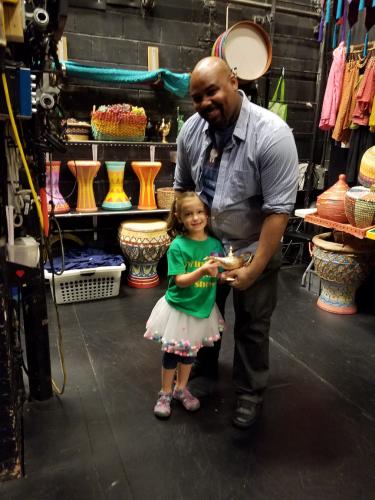 Superfan Amy Block, age 4, gets her first taste of Broadway from Genie himself.
Photo: Iris Wiener