September 12, 2022 — The Shubert Organization unveiled the James Earl Jones Theatre to honor veteran award-winning EGOT and national treasure James Earl Jones. The event, which stopped traffic on West 48th Street, between Sixth and Seventh Avenues with performances by Tony winner Brian Stokes Mitchell and Tony nominee Norm Lewis, saluted the $47-million top-to-bottom, east-to-west, and north-to-south renovation and expansion of the 110-year-old Cort Theatre, where Jones made his Broadway debut in 1958 in Sunrise at Campobello. 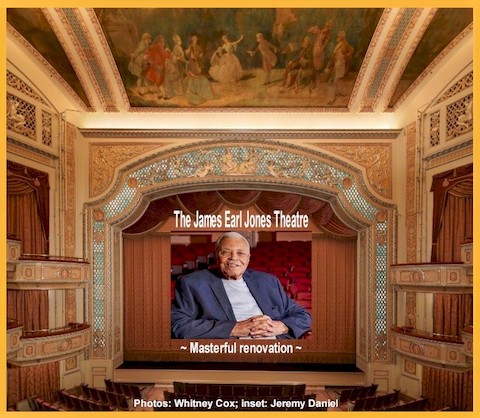 September 12, 2022 — The Shubert Organization unveiled the James Earl Jones Theatre to honor veteran award-winning EGOT and national treasure James Earl Jones. The event, which stopped traffic on West 48th Street, between Sixth and Seventh Avenues with performances by Tony winner Brian Stokes Mitchell and Tony nominee Norm Lewis, saluted the $47-million top-to-bottom, east-to-west, and north-to-south renovation and expansion of the 110-year-old Cort Theatre, where Jones made his Broadway debut in 1958 in Sunrise at Campobello.

Jones, 93, was unable to join the festivities, but there was a video clip shot during his September 8 tour of the theatre. Seated center stage, he was in awe as the curtain rose revealing what, for all practical purposes a brand new playhouse. He said, “Standing in this very theatre 64 years ago at the start of my Broadway career,” he said, “it would have been inconceivable to think my name one day would be on the building. Let my journey from then to now be an inspiration for all aspiring actors.”

He also described his Broadway debut with a wink and smile: “I spoke my first line at this theatre. I was a kid. I forget how old I was [He’d just turned 27]. I had one line in a play that starred Ralph Bellamy and Mary Ficket. It was [Dore Schary’s] Sunrise at Campobello. It was my first and only line in the play: ‘Mrs. Roosevelt, supper is served.’ But I couldn’t get it out. I am a stutterer. Mary Ficket stood there very patiently. The audience knew I was having problems. I couldn’t get my line out. Finally, I gained my voice. I repeated that line every performance for a year.”

That mellifluous voice, after challenges and elocution lessons, eventually became one of the most recognized of the 20th and now 21st Centurys – and not only onstage and TV, but also in the movies for his memorable voicing of Darth Vader in numerous Star Wars sagas as well as that of Mufasa in Disney’s The Lion King.

Jones recounted his life growing up in impoverished Mississippi and his challenges as a stutterer seeking a career on the stage, in his 1993 autobiography, Voices and Silences,

Shubert chairman and CEO Robert E. Wankel noted, “The dedication of the James Earl Jones Theatre honors one of the most beloved Broadway and film actors. It’s fitting that the renaming of this beautifully-restored building is also a moment to recognize the tremendous contribution of Black, Indigenous, and people of color people to Broadway. “

At the dedication and unveiling, Tony winner Brian Stokes Mitchell performed “Make Them Hear You” from Ragtime, and Tony nominee Norm Lewis performed “Go the Distance” from Disney’s Hercules.

The existing 112-year-old structure has been given an ultra-modern façade with new signage and marquee. The 1,082-seat auditorium has new lighting and seating. The magnificent proscenium mural, Minuet by Francois Louis Joseph Watteau, has been cleaned. Moldings have been cleaned and regilded. The original proscenium arch has been restored, with black-lit art glass set in ornamental plaster lattice. The stage has been refitted with modernized rigging.

Public Theatre founder Joseph Papp gave Jones one of his first major breakthroughs, casting him in Shakespeare’s Henry V.  It began his long affiliation with the New York Shakespeare Festival, where, among his many performances, he played the title roles of Othello, Macbeth, and King Lear.

In the 1960s, Jones was one of the first Black actors to appear regularly in daytime soaps (playing a doctor in The Guiding Light and As the World Turns). He made his film debut in Stanley Kubrick’s Dr. Strangelove (1964). There were lead roles in Claudine (1974), The River Niger (1975), Coming to America (1988), Field of Dreams (1989), Tom Clancy blockbuster trilogy — The Hunt for Red October, Patriot Games, and Clear and Present Danger — as well as in the film adaptation of Alan Paton’s classic Cry, the Beloved Country (1995).

However, he continued to make big impressions onstage, especially with a long-standing collaboration with South African playwright Athol Fugard, acting in the critically acclaimed Master Harold…and the Boys, and Othello, directed by Zoe Caldwell, opposite Christopher Plummer and Dianne Wiest. In 1969, Jones won a Tony Award for his portrayal of boxer Jack Johnson in The Great White Hope, and an Oscar nomination for the 1970 film adaptation. He won a second Tony in 1987 for August Wilson’s Fences.

James Earl Jones actor arrived in New York from Arkabutla, Mississippi (due south of Memphis), following in the footsteps of his father Robert Earl Jones.(1910-2006), who co-starred in numerous classic revivals, including, very briefly, Arthur Miller’s Death of a Salesman (1975), directed by George C. Scott and starring Scott, Teresa Wright, and Harvey Keitel; and the premiere of Eugene O’Neill’s More Stately Mansions (1967), co-starring Ingrid Bergman, Colleen Dewhurst, and Arthur Hill. Father and son crisscrossed on Broadway during many seasons, but never appeared together.

James Earl Jones, a member of the EGOT triumphant, is the recipient of three Emmys, a Grammy, a 2011 Oscar for career achievement, and two Tonys (The Great White Hope, 1969; Fences, 1987; and, most recently, a 2017 Tony for Lifetime Achievement. Under director Leonard Foglia, Jones was also a 2005 Best Actor nominee for a revival of Ernest Thompson’s On Golden Pond, co-starring Leslie Uggams, which played the former Cort.

In 1987, he was presented with the Drama League’s Distinguished Performance Award for his work in Fences. He has also collected two Obies, a Golden Globe, and numerous other theater and film awards. In 1992, he was honored with the National Medal of Arts and a 2002 Kennedy Center Honor. Jones received a 2009 SAG Lifetime Achievement Award

The former Cort, constructed in 1912, has a façade inspired by the Petit Trian Theatre at Versailles. It was named for John Cort, a Seattle-based theatre manager who owned the building before the Shubert Brothers acquired it in 1927.