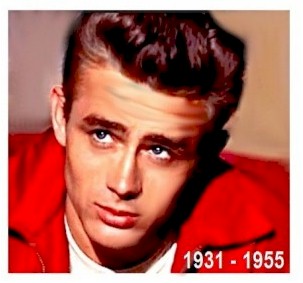 By that standard, Dean has achieved immortality. On what would be his 85th birthday and over 60 years since his death on September 30, 1955, in a head-on collision while speeding on California’s US 99 [I-5], the fascination with Dean has never ended. On February 8, the forever young Dean would have turned 85. There’ve been books, films, documentaries, and speculation on the What Ifs had his career gone on.

It’s been said that he defined a generation, and with only three major films.

This is a look back at his “exceptional uniqueness” and the New York mecca where he honed it: the Actors Studio.

Most tend to think Dean made only three films: Elia Kazan’s production of Steinbeck’s East of Eden, co-starring Julie Harris; Nicholas Ray’s Rebel without a Cause, co-headlining with Natalie Wood; and George Steven’s production of Edna Ferber’s Giant, in which he shared top billing with Elizabeth Taylor and Rock Hudson. All were shot within 18 months from 1954-1955. He was becoming an overnight sensation. But Dean had long been paying his dues.

After his mother’s death, Dean was sent to live on the Indiana farm of his Quaker aunt and uncle. There are sources that report he came under the influence of a Methodist minister and became engaged in a sexual relationship of several years. He was active in high school sports, was in a drama class, and competed in debate. Following graduation, he returned to California and enrolled in college with a major in pre-law. He transferred to UCLA, changing his major to drama. Dean did readings, auditioned [always standing out but, according to friends, puzzling casting directors with his intensity.]

He worked countless jobs, including being a parking attendant, until he finally got a break doing commercials. Then, he was cast to play Malcolm in Macbeth. This led to an invite to join actor James Whitmore’s acting workshop. His first speaking role was in a TV Easter special where he played a disciple. He dropped out of UCLA after a semester.

From 1951-1953, he had uncredited roles in five features. In 1951, Dean became bi-coastal. In New York, he was a hit with the Bohemian crowd in Greenwich Village, where he frequented the coffee houses and jazz clubs. He hung with actors at Rockefeller Center’s long-gone Cromwell’s drug store, where he got wind of auditions. Then came a behind-the-scenes job in TV. Soon, he was in front of the camera. In the age of live TV dramas, he co-starred in over 20 programs and a made-for-TV movie.

Dean became fascinated with the Actors Studio [co-founded by Kazan, later to be joined by Lee Strasberg], convinced it was the one place he’d fit in. He was such a regular, he was granted membership. Dean wrote to his widowed father in Los Angeles and his aunt and uncle on their Indiana farm: “It’s the greatest school of the theater. It houses great people like Marlon Brando [whom Dean admired to the point of imitating], Julie Harris, Eli Wallach, and Mildred Dunnock. It’s the best thing that can happen to an actor. Very few get into it.” He was one of the youngest to be accepted. 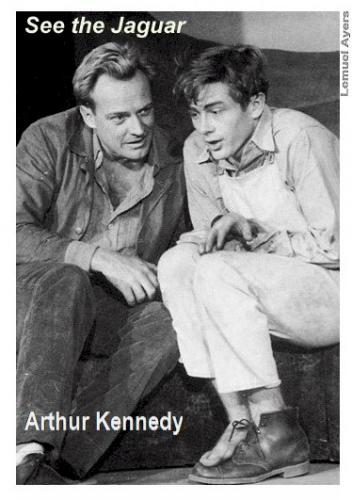 It was there he met Arthur Kennedy, who became a fan of the actor’s intensity; Martin Landau, who became a longtime friend; Eli Wallach; Paul Newman; Marilyn Monroe; and future co-star Julie Harris.

Dean made his Off Broadway debut in 1953, directed by Frank Corsaro in the short-lived The Scarecrow [seven performances] at the Theater de Lys [the Lucille Lortel] with a large cast that included Wallach, Anne Jackson [Mrs. Wallach], and Patricia Neal.

In an interview, Neal stated, “Jimmy was an unknown, but was jolly good in every way – such a refreshing presence. He was born to become an actor.”

Wallach, who knew something of “method acting,” having studied at the Neighborhood Playhouse under Sanford Meisner and being an Actors Studio members since its inception, said, “We knew we were in the presence of a blithe spirit, someone unique.” He and Dean met again at the Studio. They performed with Brando, Montgomery Clift, Herbert Berghof, and future East of Eden and Giant co-stars, respectively, Harris and Baker.

Landau said, “As young actors, we walked the streets, talking about theater and wondering about our next job; reading books and discussing them; seeing plays and films; doing workshops; and being serious about the thing we loved, acting … We had an amazingly instant rapport … We were sort of a surrogate family.”

Dean made his Broadway debut in 1952’s short-lived See the Jaguar [five performances] by N. Richard Nash [The Rainmaker], which featured Kennedy. Then, it was back to TV.

A 1954 featured role was opposite Ronald Reagan. The future California governor and U.S. President said, “Jimmy was an intelligent young actor who seemed to live only for his work. He was completely dedicated and although a shy person, he could hold a good conversation on many wide-ranging subjects.” The same year, Dean was on TV opposite future Rebel co-star Wood.

Colleagues spoke of Dean’s “extreme concentration and exceptional imagination”; and how his Actors Studio experience established his uniqueness and enabled him to make even minor roles his own. Some saw that uniqueness as a rebellious nature and, when working with him, an irritant.

In 1954, after several callbacks, director Daniel Mann and producer Billy Rose cast Dean in Augustus and Ruth Goetz’s adaptation [on the heels of their hit The Heiress from Henry James’ novel] of France’s Nobel Prize winner Andrè Gide’s 1902 controversial and autobiographical novel The Immortalist. He appeared opposite popular French actor Louis Jourdan, making his Broadway debut, and Geraldine Page, in her second Broadway outing. They portrayed a couple honeymooning in Tunis, as the husband recuperates from tuberculosis.

While Dean and Page hit it off immediately, Jourdan complained to Mann that Dean “ignored his blocking and was a distraction moving about the stage a lot.” He may have been peeved that Dean, in the role of an Arab houseboy and prostitute, got better reviews. Mann spoke to Dean, but it did little good. The Frenchman and the rebel only spoke onstage. It wasn’t an ideal situation because Jourdan’s character becomes romantically obsessed with him – and his obsession with Dean was in a whole other direction. Frustrated, Dean gave notice after two weeks. The play, way ahead of its time, didn’t attract audiences. It folded after 96 performances.

The closing was was fortuitous. Kazan was about to set off to California to direct East of Eden. At the Studio, Kazan told Broadway playwright Paul Osborn, who’d done the screenplay, he was looking for “another Brando” to play moody, insecure, and frustrated Cal Trask. Osborn suggested Dean.

Wallach recalled Kazan’s notes on Cal. “He said, ‘Everything this kid does should be delightfully anarchistic, odd, original, imaginative, eccentric, full of longing, and with sudden mood alterations. He is the unexpected personified. He goes directly to the heart of the matter.’ That was Jimmy, always reaching out.”

Kazan stated, “I had this intuition about Dean. He had a real sense of himself. He wasn’t polite. He didn’t try to butter me up. When I discussed the role with him, he found it difficult to talk. His auditions were filled with bold choices, which really attracted me. I saw his as this twisted, extremely grotesque figure.” When Dean got the job, added Kazan, “He invited me for a ride on his motorbike. That was his way of thanking me.”

When Kazan and Steinbeck met to discuss the arc of the script, Steinbeck decided that instead of having Adam [the stern, religious father] as the focal character, “Cal is the character that the audience has got to know and understand.” The author was anxious to meet Dean. When he did, he didn’t care for him. However, he wrote Kazan that “the moody, complex young man was perfect for the part.”

In an interview, Harris stated, “Jimmy was very exciting – not only enormously charismatic, but also a very intelligent, gifted actor. He had this ambition to play Hamlet. I hoped he would keep working in theater.” She said that Dean often surprised everyone by doing the unexpected. She found him sweet and kind. Their scene on the Ferris wheel is one of the most poignant in moviedom. Dean is serious and digs deep for the heartfelt emotion he shows.

Lois Smith made her feature debut at 24 in East of Eden as a shy girl working in a bordello. “Jimmy was a sweet, rustic person. I used to imagine him sitting on the porch at the family farm back in Indiana. On the other hand, there was this suspicious, taunt, guarded young man. Both seemed always present. There was this thrilling tension within him. Jimmy brought a new sensibility to acting.”

Things didn’t go smoothly on the film. Dean was shameless. Massey was one of the most acclaimed actors at the time. That didn’t phase Dean one bit. He found him stern and inflexible. Time and again, he’d flummox Massey, who couldn’t stand “his Actors Studio mentality” and had little patience with him.

In one scene, Massey became flustered when Dean “pulled one of his sudden mood alterations” as they – Cal and Adam — were have a tense moment about money that Adam thinks Cal stole from workers. Massey is pleading with him to be a good son and Dean contorts, turns away, and crumbles into a ball. Moments later, Dean waving the money approaches Massey and lunges at him, jabbing him into a wall. He begins sobbing, throws his arms around Massey in a tight bear hug. Massey, seemingly fuming, exclaims “Cal! Cal!” but Dean doesn’t let go. In a shot not used in the film, the camera caught the shock on Massey’s face.

Complaining that Dean threw him off by changing lines and doing them as he felt, Massey threatened he’d walk. Word got back to Warner Bros. studio chief Jack Warner who advised Kazan to tame Dean. When Kazan addressed the matter, however, he told Dean, “Raymond’s getting really irritated. Keep it up! That’s what I want.”

Early on, Kazan saw “Dean’s star power exploding” and, in viewing rushes, “jumping off the screen.” Dean’s performance overshadowed his co-stars, especially the soft-spoken, delicate Harris, and Richard Davalos, playing his brother. It even came close to overshadowing Jo Van Fleet, in a fierce role as his mother, a madam, whom his father told was dead. [The role won her a Supporting Oscar.]

But, as time went on, the director admitted that he considered the actor “quite a handful.” On location in Mendocino, California, on the Pacific coast near Fort Bragg, Dean would disappear for hours. Again, search parties were sent to get him back to the set. They’d find him riding his motorcycle and bonding with young townspeople who flocked toward him.