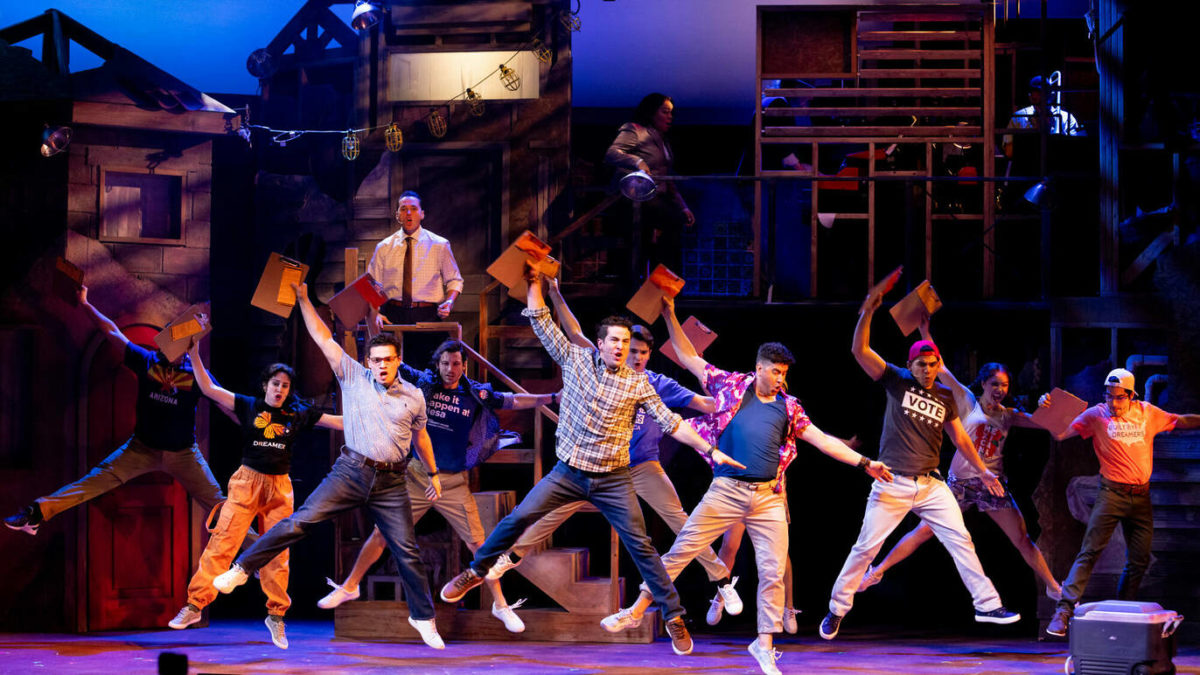 ¡Americano! was developed in association with AMAS Musical Theatre. It premiered at Phoenix Theatre and is now making its off-Broadway debut at New World Stages. The musical, with a book by director Michael Barnard, Jonathan Rosenberg and Fernanda Santos, is based on the life story of Tony Valdovinos, who grew up in Phoenix, worked in his father’s construction business and dreamed of joining the Marines. It wasn’t until he’d turned 18 and tried to enlist that he learned he was not a citizen.

¡Americano! is nothing if not earnest. Tony ((Sean Ewing) is a good son, even if he often disagrees with his father, Martin (Alex Paez), about his future. He is a timid but true boyfriend (It takes many scenes before he realizes he is in love with his pal and fellow aspiring Marine, Ceci (Legna Cedillo). He is a loyal friend, to the troubled Javi (Pablo Torres). Add to that Ewing’s stupendous voice and who could help but love him?

Tony’s mother, Felicitas (the funny and soulful Johanna Carlisle-Zepeda), who tries to make everyone listen to reason and eat, is another likable character. And Joaquin (Lucas Coatney), the wise gay friend, may be a stereotype, but Coatney does such a good job with his portrayal, we are willing to forget we may have seen him before.

Tony has an older brother, Hector (Ryan Reyes), a science nerd who finds love with Jessica (Carolina Miranda), another science nerd. Their first date is at the library, and we wish them luck.

There are no bad guys in ¡Americano!  (except for gang member, Dante García [Alessandro J. Lopez]). But there is the American government, which will not let Tony serve his country the way he has always wanted to. Yet, according to ¡Americano!  if we work really hard, organize and unite, even that great and powerful behemoth just may listen to reason.

¡Americano! has a score by Carrie Rodriguez that combines rock, pop and Mariachi more successfully than one might imagine. It also has a multi-level set by Robert Andrew Kovach that both serves the play well and gives the audience a good idea of a barrio north of the border. Sergio Mejia’s choreography highlights both the miliary and the Mexican themes in the musical.

But the creators of ¡Americano! still have a lot of kinks to work out. The musical has so many subplots it takes a while for the audience to understand where the play is going. Sometimes the lyrics written by Rodriguez with Barnard are Rosenberg, are uncomfortably clunky. And often the actors say lines that would not be said in life and shouldn’t be said onstage. Even if the actors were stronger, they would have trouble with this dialogue.

Yet despite everything, most people will leave New world stages feeling happy and satisfied. If ¡Americano! is not a perfect gem, it is certainly a diamond in the rough.