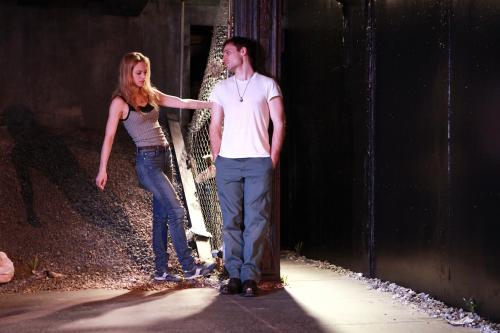 Marin Ireland stars as Darja (a Polish-born, New Jersey bred woman not unlike the playwright) who relives three relationships in three time settings – 1992,  2006,  2014 – that all end up at the bus stop.

First we meet Tommy (Morgan Spector). They have been together for years and the young immigrant has tolerated his multiple infidelities – until now. Now all she wants from him is $1,000 to buy a car and go look for her estranged son, whom Tommy doesn’t much like. Tommy isn’t very helpful to the distraught mother, who finally just claims he owes her. Relationships are all just about money, after all, she decrees.

Tommy is a bit put off to think that Darja is putting a monetary value on the sexual favors she has performed for him over the years as part of their relationship, especially when he realizes she might actually leave him and those benefits might no longer be at his beck and call. He does seem to care about her, however, even while proclaiming his intention to see other women.

Flashback to when Darja first arrived in the US with her first love and fellow immigrant, Maks (Josiah Bania). He and his wife are full of hope for a new life – and a music career for him — in a new country full of promise and possibility. This relationship also centers around money, we discover – their lack of it – which is a problem since Darja is expecting a child.

Flash forward and Darja finds herself homeless at the bus stop where she meets Vic (Shiloh Fernandez), a kind street hustler.

The factory where Darja once worked looms in the distance (though not depicted on Justin Townsend’s bleak, simple set) as a metaphor for her struggles. Once a bustling example of the hoped-for fruits of honest labor, it has since been shuttered as business dropped off and workers were let go. The young woman also is haunted by the memory of a terrible tragedy at the hands of one of the factory’s slicing machines, all because a worker friend of hers had been distracted by thoughts of being somewhere else, somewhere that felt like home.

The play is a sensitive look at one immigrant’s story over the span of 20+ years. It’s touching and realistic, with Ireland giving a strong performance (complete with accent – dialect coaching by Charlotte Fleck and Deb Hecht ) under the direction ofDaniella Topol. The 90 minutes without intermission is compelling, but a bit of a downer, despite some humor to help temper the story.

The time jumping is confusing at first, but once we get the hang of who’s who and what is happening, we are aboard – even if Darja herself never makes it on a bus out of her grim New Jersey surroundings. Majok’s writing is poetic and full of passion is (she has an MFA  from the Yale School of Drama).

She is a playwright to watch. Ironbound premiered at the Women’s Voices Theater Festival in Washington, DC last fall. Her plays have been performed and developed at Steppenwolf Theatre Company, The John F. Kennedy Center, Williamstown Theatre Festival and Yale Cabaret among others.  She is part of the Lila Acheson Wallace American Playwright Program at The Juilliard School and has taught playwriting at Williams College, Wesleyan University, SUNY Purchase, and as an assistant to Paula Vogel at Yale.

Ironbound runs through April 24 at Rattlestick Theatre, 224 Waverly Place, NYC. Performances are Tuesday through Thursday at 7 pm; Friday and Saturday at 8 pm; Saturday and Sunday at 3 pm. Tickets are $10-$70: rattlestick.org.